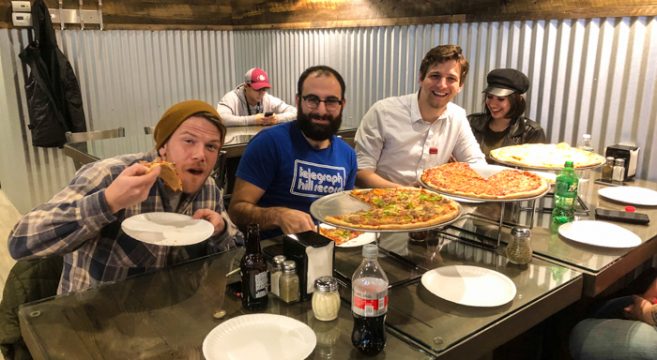 Pizza With The Band – The Burns at Enzo’s in Oceanport

We were in Asbury Park earlier in December for Gurlzilla, an afternoon benefit show for Garden State Equality that highlighted some of the best local musicians for a great cause. We had also been trying to schedule a Pizza With the Band with The Burns for a while but it just wasn’t in the cards.  It finally worked out for us when we found out that Burns’ bassist Chris Dubrow and lead guitarist Matt Fernicola are also in the Man Devils, who back Avery Mandeville—the show’s closing act. Post-Gurlzilla, we all headed over to Enzo’s in Oceanport and also met up with Burns’ guitarist Joey Henderson. Drummer Billy McCabe was not able to attend, so we made fun of him.  Chris brought girlfriend Ava whom he jokingly called the Yoko of the Burns. Ava seemed nonplussed about that accusation.

As is proper with any dinnertime conversation one of the first things we talked about was murder. The band were stunned by the 2016 murder of a Hofstra student whose body was cut up and buried just a few yards from Dubrow’s house. We had the morbid thought of while people were probably burying a body Chris might have been either practicing the bass or maybe eating a bag of Doritos watching reruns of Seinfeld. Band members all thought that the perpetrators of the crime did not use great planning. We were unfamiliar with Oceanport and were off to an auspicious start! Murder-talk quickly moved on to holiday plans…  as it normally does.

The band is beyond excited to host the second annual What a Wonderful Year two night event at the Wonder Bar in Asbury Park on December 28th and 29th. Both nights will feature a jam-packed roster of incredible artists including Lowlight, The Vaughns, LEEDS, Brian Erickson and Rachel Ana Dobken. Full lineup down below. They started this event last year as a way to play a show with all their friends that they shared a stage with during the year. The band says they’d like it to eventually become three or four nights of music. Knowing how hard this band works we’re fairly sure they will get there.

Once the pizza was ready, we dug in with zeal.  All three pies came on crusts that were crispy but not too thin and were all well-baked. The white pizza was garlicky with not too much cheese. It was a big hit and we all went for quick seconds on this pie. In fact, this was the YDKJ-chosen item and we think we made some converts since The Burns were really digging this pie, too. Who needs tomato sauce?

OK, tomato sauce is good too. Both the plain pie and the sausage and peppers one were very saucy and well-made. The cheese pizza was really well done which I love. It was a really nice slice. The testament is that we finished them all quite quickly and Ed mentioned we better leave soon or he was going to order another.

Food on tour came up and Matt mentioned his podcast, Clif Cast, which started as a conversation among band members about all the Clif Bars and their various merits.  We listened to both episodes on the way home and we loved the format.  Can’t wait to hear more about all the Clif Bars! Public service announcement though; eating 6 bars instead of meals may not be the best idea. Or it may lead to euphoria. Results pending.

We also wanted to hear about Convention Hell where the band performed as The Doors.  Unfortunately, we couldn’t make it down that night but we were really looking forward to hearing them play.  Especially as Joey channeled Mr. Mojo Risin aka Jim Morrison complete with flowing wig and swagger. They wanted to be The Kinks but they didn’t think enough people would be into it.  They were looking forward to having on-stage band fights, Kinks-style with players being constantly changed throughout the set. I wonder who would have been Ray Davies and who would have been Dave.

Here’s the full lineup for What a Wonderful Year 2K18:

You can check out the band’s excellent 2018 EP You and previous work right here. Then be sure to get to the Wonder Bar for What a Wonderful Year 2K18.