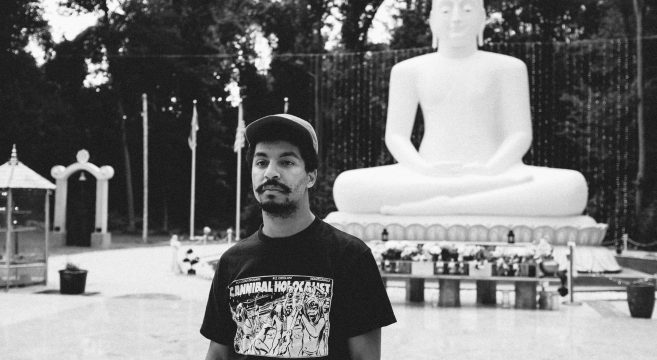 It was not surprising to us when musician Ricardo Lorenzo told us he had put down his guitar and picked up a camera for good. He directed and edited many of the videos for his band, YJY, and his passion for filming was evident. We even first met him on the set of The Carriage House TV, a short-lived video series that showcased NJ bands where he could be seen feverishly working behind the scenes. You could say this was a natural progression for the talented artist.

We met up with him for lunch in Somerville recently and over tasty Korean chicken wings and bulgogi he told us that he moved his creative outlet from music to film as it allows him to create an entire vision that is his own. Music was a team effort, which he appreciated, but he wanted to be in complete control.

Financing films is so tough that Ricardo is focusing on short films rather than feature length ones. You can help him raise money for his latest, An Unlikely Story, by donating on his IndieGoGo site. There are many perks including a special thanks in the credits ($15), movie poster drawn by Shaky Kane ($85, and seen above) and an executive producer credit ($500).

An Unlikely Story is a dark comedy. A young woman named Syl (played by Jeannette Berman) who struggles with depression and suicidal tendencies forms a bond with a cannibal named Jeff (played by Manuel Belliard) when they make a bizarre pact. She asks him to kill her and eat her.

Not one to shy away from tough topics, his 2013 film Transparent focused on themes of identity. The movie was about a teenager coming to grips with her puberty while learning to accept her sibling transitioning from female to male. previous films have included themes about loneliness, identity and mental health including depression. This time out he explores ways we can treat depression and the unique friendships that can help us through the struggles associated with the illness. He’s been getting a lot of feedback from friends and organizations about how to write about suicide now that he’s gotten a script finished. He told us that he’s already learned a lot about suicide and its survivors and he is using that knowledge to tailor the script for this project.

Ricardo is an avid comic book reader and wants to create a stylistic world like ones by comic writers Daniel Clowes, Gabrielle Bell and Adrian Tomine. He is also influenced by filmmakers David Lynch, Kenneth Anger, Harmony Koriane and Todd Solondz. These avant-garde influences read like a Who’s Who of Angst and should make a visually interesting watch.

Ricardo told us that he watched sci fi and action movies with his father as a kid. He’s a first generation Dominican and hopes to inspire other Dominicans to tell their stories.

Donate money to Ricardo and feel better about yourself for supporting an artist’s dream today!