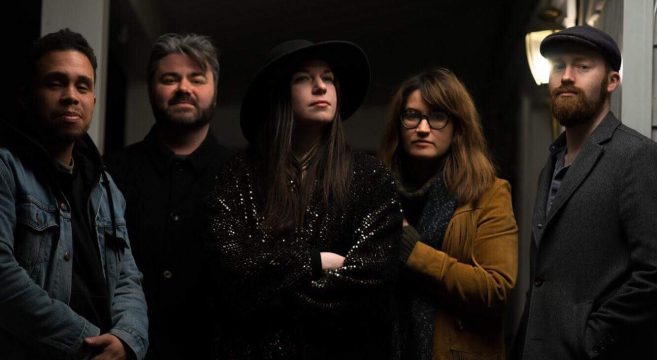 Since 2015, Lowlight has been spinning its self-described “Roadhouse Chic” sound to the tune of an ever-increasing audience, two acclaimed studio records, and tour with Rock & Roll Hall-of-Famers the Pretenders (documented on a 2018 live album). Their latest move is an alliance with Telegraph Hill Records, an influential new Asbury Park-based record label who has championed their most recent work, a December song called “Burkhalter” and this most recent effort “Give it a Minute,” released Friday March 1st.

The song rolls along with the familiar side-to-side sway that Lowlight has been peddling with increasing deftness across its four years as a band. And “Give it a Minute” continues Lowlight’s winning streak as the band deepens its signature sound by adding subtle, noticeable touches to an already well-refined sonic palette. That’s a too-fancy way of saying ‘nice job on the gang vocals, guys.’

I’ve had the pleasure of calling Renee Maskin, Rey Rivera, Colin Ryan, and Dana and Derril Sellers friends since meeting them at an early show at the beloved, now-defunct Rail House in Rahway a couple summer’s ago. Oddly enough, though, this is the first time we’ve managed to get a Q&A on the record.

Brian: There’s a lot of musical variety across your records, but when you zoom out, the body of work feels very monolithic; like it’s all cut from a similar cloth. What does Lowlight do to ensure a favorable balance between consistency and variety?

Lowlight: It’s the kind of thing that takes care of itself. It’s the reason all of us musicians can use the same group of chords or the same rhythms over and over agin, yet we haven’t exhausted the possibilities of popular music.  We never will. Lowlight’s music sounds like it was all cut for the same cloth because it’s the only cloth we could possibly use.  Our next album is going to be all polka dots, but you’ll still know it’s us.

Brian: Derril and Dana just moved. And with it, the band’s recording studio as well. How has Lowlight adjusted to a change in location?

Lowlight: It’s been a pretty smooth transition. The studio has been upgraded, actually.  The only thing that’s majorly different is that we’re all in the same room all the time now.  There’s no more hanging out and watching TV/talking while someone else is doing takes in the live room.  We’re all the way in all the time.  That’s got it’s ups and downs, but it will take some time after the record comes out to get the hindsight needed to decide if it’s better or not.

Brian: Not counting shows or the Sellers’ marriage, how often does Lowlight see one another?

Lowlight: It depends on what you mean by “see”. We tend not to look at each other during rehearsal.  Definitely not in the eyes.  That said, we’re all in each other’s vicinity at least once a week, if not more…we’ll look into it and get back to you.

Brian: This band feels very visual at times. What kind of influence do filmmakers like David Lynch have on the band’s music and its aesthetic?

Lowlight: A movie is a lot like an album. It has individual pieces and multiple people contribute, but ultimately the creative team needs to shape and uphold a cohesive artistic vision. We’re drawn to filmmakers that are heavy handed and deliberate with those style choices. Take Wes Anderson or the Coen Bros for example: You might not see all of their brushstrokes, because it’s all so beautifully crafted, but they’ve got a perspective and style that you can follow through their careers.  We’d like to think our music is like that too.

We tend to choose a lot of sonic textures, and certainly lyrics, that evoke a lot of imagery. We all happen to be very visual people as well.  Three-fifths of Lowlight have other gigs as designers, it was bound to seep into the music in some kind of way. And we’re big fans of Twin Peaks. Dale Cooper is definitely in the music somewhere, having a coffee.

Brian: Each member of Lowlight, like many great bands, displays their own unique personality both on stage and on record. How naturally did that happen?

Lowlight: Well, that’s nice to hear.  It’s not something we deliberately set out to do.  But our different personalities seem to compliment each other, which might be why we work so well together. Our whole creative process is very democratic.  We try to be respectful of each other, creatively and otherwise, and we’re glad it shows.

Brian: Even though you’re a tight-knit unit, you leave a lot of room for collaboration on your records. Who are some of these collaborators and how important are their outside contributions to the shape and sound of what you’re doing?

Lowlight: We have some very beloved musical friends and collaborators. Most of them have been or are in our other musical projects through the years. This whole music thing can put deep anchors in people and there will always be room for them in our music. Some shout outs: Community Center, The Roadside Graves, Joe Galuppo, Janet Kelly, Tony Aichele.

Brian: You recently signed to Telegraph Hill Records. What are they doing and how do you think those efforts can help Lowlight reach the next level?

Lowlight: Every musician needs a small village of people that believe in and actively support them. You don’t find souls this generous every day. Telegraph is a label full of people with passion and ambition. They’re helping us out with promotion, an old-fashioned street (road) team, and all kinds of other more-boring but even more-important things.  We’ve always taken a lot of pride in the fact that we’ve been able to record our own albums, shoot our own videos, etc.  But it’s definitely nice to let some other people into the process, and also nice to know they have our back. We’re very psyched that they share our enthusiasm for the next album.

Brian: The new song “Give it a Minute” is part of a full-length record. Why was this chosen as a single and not some of the other material you’re playing live?

Lowlight: We love all our babies. Unfortunately, they often hear us argue about them, which makes us worry for their future. What’s done is done though, and eventually you’ve got to make the choice to put a few on the front lines. We find that the moment you show someone your material for the first time, you already know the right answer is in terms of what’s a single and what isn’t.  “Give It A Minute” is turning into one of our favorite songs to play live, and has been kind of interesting to write. In it’s very earliest form, it was this very slow, somber, dramatic inkling of a chord progression that Derril and Dana had recorded on a phone.  And then a few days later, they decided to speed up the whole thing, and it turned into an upbeat, catchy little number.  The majority of the lyrics came very quickly too.  Some songs are like whittling a rooster from a stick. The best songs come on like the weather.  “Give It A Minute” was a rain storm, and it seems to still be moving.

Brian: What are you doing differently on your upcoming full-length, Endless Bummer, which you hadn’t done on previous records?

Lowlight: At the end of our “Born to Run” EP is a ten minute experimental jam.  We had not written a note of that song before recording it. That was a confidence builder for us, so we decided to take that same basic premise and write most of this album in the studio, rather than at rehearsal. These songs aren’t long psychedelic experiments, but they were pretty much born having never been played before. We’re currently learning how to make them work live.  We know you’ve heard a few of the new songs at our residency shows, we’re curious to get your take on some of the studio versions. But we’ll save that for later when the album comes out. You know we look forward to our little chats.

Brian: What’s one unique thing that each member brings to the table?