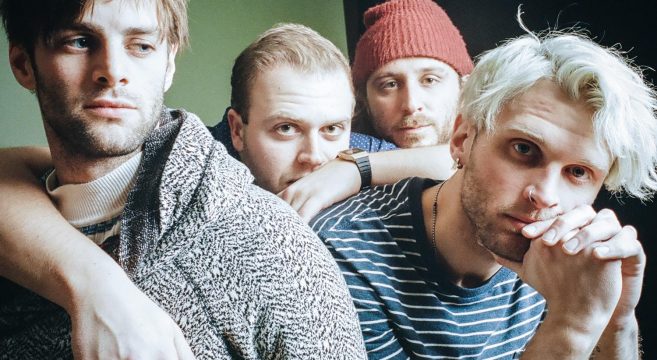 Welcome to a very special installment of Pizza With the Band. We’re doing things a little differently this time. Asbury Park band Deal Casino is one of the most exciting bands in the Garden State right now. They have been on an upward trajectory through a steady release of inventive, evolving records and an intense and thrilling live show that has been winning fans across the country.

Therefore it was a no-brainer when Deal Casino drummer Christopher Donofrio reached out to me a while back with an idea. What if the band wrote about their top five pizza joints? I couldn’t say yes fast enough. The band had recently concluded a short tour and they came to the same conclusion as YDKJ–the best pizza in America is right here in NJ. So Chris along with bandmates guitarist/vocalist Joe Parella, bassist Jon Rodney and keyboards/guitarist Jozii Cowell visited their favorite pizza spots to give us the lowdown.

Without further ado here is Deal Casino and their top 5 pizza destinations!

We eat a ton of pizza. Everyone eats pizza, of course, but after spending a year on the road we realized that most other places in this country serve up some serious nonsense. In Chicago they make a bread bowl, dump some weird sauce on it and call it pizza. In LA, a super hip little spot playing jazz served us up some cardboard that would make Uline jealous. In Texas, a joint named after a city in New Jersey made pizza that was absolutely anything but. And basically everywhere, if you said “plain slice” you got looked at real funny. Apparently they refer to it as “cheese” pizza. Or something.

Our New Jersey pizza is a total spoil of riches. We love all of it. We love a good bougie Neapolitan pie with some farm to table toppings. We love some specific, legendary “have to be in the mood for it” pizza like a Vic’s in Bradley Beach or a thin crust Pete & Elda’s in Neptune City.

But mostly, we just love a dang good pizzeria.

Here’s some of our favorites.

Many band meetings have gone down here. We even used a Serpico’s session for the cover of the 4 Track alternate version of our last album. Big slices, good sauce. The type of pizza you can keep eating till you decide you feel like dying.

The home of “Pizza Monday’s.” $8 bucks a head, unlimited plain slices and a soda cup. Good sauce and cheese ratios. Easy crust to finish without being too thin. During our last recording session, our producer Erik Romero won Pizza Monday by doing 11 slices. Pretty boss. This is “I’m starving and we are going to party real hard” pizza.

A thicker style crust, without being over bearing. I can easily take down 4 to 5 without loosening the buckle. Sweet style sauce. Has its own “thing” to it without going so far left of center that it becomes “thing” pizza. Still just a good ol’ fashioned pizzeria slice. When you fold the slice, sometimes it breaks which is weird, and awesome.

I absolutely love going to Maurizio’s Pizza. They have a thin crispy crust which, to me, is essential for pizza. It reminds me of the old country. I had a white slice which they threw pesto on and a plain slice. Both of which were amazingly delicious. They have everything from your classics to things I only see there like a chicken parm style sandwich on a giant garlic knot. Also, Maurizio’s is right next to my go to food shop spot, Shoprite. I am with Shoprite for life. #priceplus

Federico’s is great. Simplicity is their finest ingredient in my opinion. They don’t try to cover up a bad slice by dressing it up in toppings. They just let the slice be the slice it is meant to be. They also have a daily special which gets you two slices and a drink for five bucks which is incredible. They also have cannolis on location which makes leaving that much more difficult. They just stare at you through the glass until you submit to them. I usually stay strong but I’ll admit I have indulged.

Deal Casino plays the House of Independents in Asbury Park tonight and there are very limited amount of tickets still available.

Check out their amazing new single “bangbangbang” now streaming on all services.