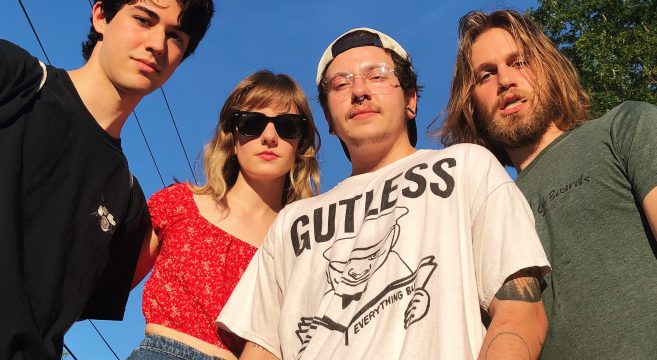 “True me is me and a guitar. Anything else you put on it is an outfit…” – Liz Phair

Atlantic County band Molly Ringworm have just released their excellent second EP Good Ol Boys. Not only is the record a wonderful piece of introspective indie rock, it is the sound of an artist discovering her voice in these uncertain times where it sometimes feels like things are moving backwards instead of forward.

The influence of Liz Phair is evident from the very first guitar strumming and vocals in short opener “Calvin”. Lyrically Holt is examining many of the same themes that Phair did including gender roles and modern relationships. “Making a mess, puffing out his chest, I want to be a lot like him, indifferent and not ashamed of it” Holt sings.

On “Be Mindful” the band channels Real Estate with jangly guitar interplay and smooth rhythm section. Lyrics like “Remember how damn good it felt to be, so utterly in sync with somebody?” hits home with anyone who was left second guessing what happened along the way in a relationship that used to be so strong. Closer “No Matter What” is a perfect, dreamy pop song that reminds me of dollys at their peak. “You’re talking to me like I’m dumb, I know what you don’t” suggests an emerging confidence in oneself that shows growth.

I had an opportunity to ask Holt a few questions.

Who inspired you to pick up the guitar and become a musician?

Before I ever picked up the guitar I was a singer. Listening to pop music from Britney Spears, Michelle Branch and Shawn Colvin, and becoming involved in theater inspired me to take singing lessons and keep a journal of lyrics at nine years old. I started singing in bands at eleven, and went on to attend a performing arts high school. Getting deep into Liz Phair in high school inspired me to finally start playing guitar and get serious about songwriting.

How did the band meet and decide to make music together?

Ringworm’s lead guitarist, Johnny Zappas, is my cousin. We’ve been playing music together for a decade. We both went to the same performing arts high school where we met Andrew Simpson (bass) and Niko Berardo (drums). We played music together in class and became friends as classmates, which led us to play together outside of school, too.

You are based in Atlantic County. Have you found the South Jersey scene supportive?

College radio stations like WLFR (Stockton) and WTSR (TCNJ) have provided us with lots of opportunities to play and share our music in South Jersey. We are huge college radio fans and so thankful for the dedicated students and community members that run them. There’s also lots of DIY spaces like The Dad Motel/Sweetwater House, Friendship Mountain, and Greenbrier that have provided safe spaces for us to play over the years.

When we first corresponded you wrote the songs deal with “the struggle to find your voice in a world and industry that’s constantly silencing the feminine.” How do you combat that?

I try to combat that by sharing my experiences of misogyny in performance spaces in my writing. I think the very act of performing as a woman in a band with all men and in lineups with all men is in itself a way of refusing to be silenced; performing is saying I’m here, I have a voice, and I’m gonna say what I have to say.

Titling the EP “Good Ol Boys” is supposed to be tongue in cheek because not everyone in Molly Ringworm is a guy. The title is taken from a lyric in our song “No Matter What,” which addresses my experiences with sexism in the male dominated local music scene. There’s a lot of guys supporting, promoting and protecting other guys and I often feel like I don’t get that same level of support based on my gender. The title pokes fun at this exclusivity, and I hope it begs the question, “Why should gender come before the art?”

You can stream the EP on Spotify and Apple Music and purchase at iTunes and their Bandcamp page.