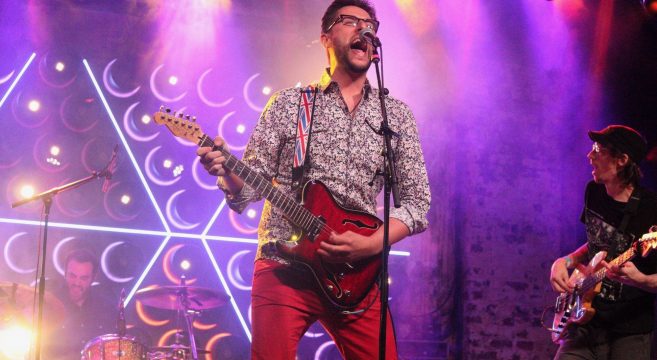 Last Friday Asbury Park band The Extensions released their superb debut EP Bellicose and celebrated with a show at Asbury Lanes the same night. Out now on Mint 400 Records, the album is a breath of fresh indie and power pop air made by a band whose members know a thing or two about creating catchy, thoughtful tunes.

The Extensions are a four piece supergroup of scene veterans who have been playing in various bands for many years: Brian Erickson (guitar/vocals) ex Paper Jets, Lisa LoVell (keyboards) ex Dave Mooney & Viewers Like You, Kevin Newcomb (bass) ex Fun While You Wait and Pete Stern (drums) ex Rose Boulevard.

The band is working with 3143 Artist Management and the show was also a release party of an 3143 compilation album. The Extensions shared the stage with The Mercury Brothers, Dave Mooney and Viewers Like You, Arlan Feiles and the Brokenhearted and Deirdre Forrest and the Back Seams. All bands impressed and there is an excitement building in this network.

The Extensions are enjoying their new dynamic as they appeared to be having a wonderful time on stage. Erickson, red pants in tow, commanded the stage expertly as he has always done and he took time to play off the energy of all on stage. The band played with a lot of heart and as if they were trying to prove a point. And they are. The Extensions can seriously rock. Hard.

Filmed by Bart Lentini, the video below captures a little of the energy that was emanating from the Asbury Lanes stage from The Extensions. I suggest you catch them the next time they play near you and see for yourselves.

Bellicose is available for streaming and downloading everywhere you get music including Spotify, iTunes and Amazon.