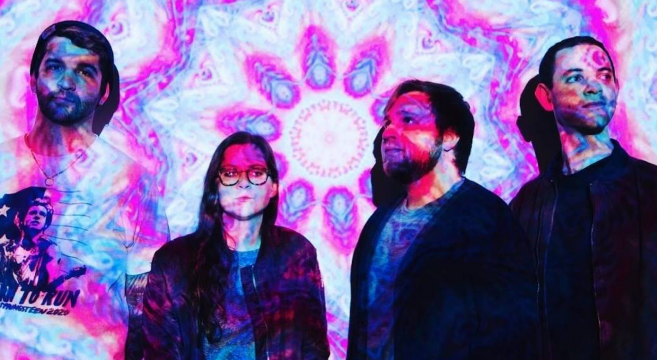 Blue Vervain is a flowering plant that has the benefits of soothing the nervous system, reducing stress and depression and a pain reliever. Therefore it is the perfect name for this Bergen County band that mixes elements of shoegaze and dream pop with their infectious indie guitar sound to create emotionally compelling songs. In other words, perfect ear candy for me.

Guitarist/vocalist Jon Khan tackles the themes of love and loss on their latest album Wounds. Just reading the titles of the songs, “Cycle”, “Out of Sync”, “All on My Own”, tells you that Khan is working through something that we all go through. How to connect with one another and how to find meaning in those connections. Along with Nikki Marroccoli on keyboards/synth, James Pawson on bass and Ori Yekutiel on drums the band, recently signed to Mint 400 Records, have created a mature, nuanced record.

You can check Blue Vervain live when they play Pet Shop in Jersey City for Indie Binge on November 9th with 30 other bands which promises to be the show of the autumn season.

1. Bruce Springsteen – Darkness on the Edge of Town

This has been my all-time favorite “dark head space” album since I was a young kid. Throughout the hard times and good times, it helped me reflect on a life that I was living at a very early age and helped me digest some of the extremities about growing up. I first discovered this album while going through my mother’s cabinets upstairs in the house we were living in and seeing this dusty CD from 1978 catch my eye with an album cover of this “greaser-esque” looking guy with bedhead. Needless to say, I slapped it in my Walkman and never turned back.

When I listen for a band, the more emo you can feel the better. Tigers Jaw is the epitome of emo angst. The first time I heard this album I was driving back up from Asbury Park after having a really horrible end to a relationship. This record kept me company on that trip, helped translate what I was feeling at the time, and made me feel like I wasn’t the only one going through it. There’s something so raw but so beautiful about this record and it definitely has had a huge impact on my writing and the way I want my music to feel.

Growing up in New Jersey around 2007/2008 you first started to catch wind of what the Gaslight Anthem was all about. Classic heartland rock ‘n roll with a “catch-all” feel. It reminded me a little of Springsteen at the time which I immediately connected with, but at the same time, something happened in that studio with those songs, that in layman’s terms, would have to be labeled as magic. I first heard this record on a close friend’s Mac through speakers and it absolutely blew me away. The lyrics, the growling, the melodies, the octaves being played on the guitar higher than anyone has dared to go on a guitar neck. It was groundbreaking stuff for me.

I first heard this record a year ago, and it has become one of my favorite records at this point of my life. The album title really suits what this record makes me feel. The production and the simplicity in the parts really put me at ease and Lindsey’s voice really has a subtleness but a powerful undertone to it. The recordings are, well, Lush. This album has had a big impact on my current writing post Wounds.

This album has a grand, fuzzy, melodic indie rock vibe to it in with intimate vocals and harmonies coated gently on top to really have the listener digest everything Petal has to offer. One of the main things that stuck out to me on this record was how clear and plainspoken the vocals were, so much so that I felt as if the words were being spoken directly to me. That’s what intrigued me about this band. Digging deeper, you can find revealing catchy-pop tracks and intimate piano ballads that make this record one to reckon with. It’s a beautiful record that has become one of my favorites.

6. Against Me! – Transgender Dysphoria Blues

One of the most beautiful things about records is that you can fully put out a concept or a personal intimate thought and record your songs and order them how you want them to be addressed to the point where you could help others going through a similar story. The aggression is what I immediately connected with on this record. The rage in Laura’s voice is unparalleled. This was a very revealing record for her, and it was something that she felt like she needed to say, and the finished product is a beautiful all in your face angsty punk record that will transcend time and has helped shaped societal views in a positive way.

7. Kendrick Lamar – To Pimp a Butterfly

This record has been a favorite of mine for a little while now. It is a genre busting rap presentation that’s fluid yet unpredictable. This was when Kendrick started branching out and discovering new ways to make music. Sonically at the time, it was something that hit me different. It almost felt as if this record instead of relying on one direction was hitting every direction it could hit. There is so much tragedy in this record, but there is also a sense of community and appreciation for life worth living embedded in the lyrics. In times of complete adversity, there is hope. But it can also end in not even a second, so with that in mind live the way you want to live. That’s what I get from this record.

I first heard this record in 2014. It is a perfect mix of indie rock with post-2000’s emotionally driven pop punk which I love so much. Sure, it was a pop-punk record that came out in 2014, but it held its own and could exist in that time because it was so good. The aesthetic range and self-absurdness on this album is a stand out from many records that came out that year.

I first heard “Don’t Feel Like Dancing” through a curated Facebook ad. I was experiencing Ohio blacktops, driven guitars, one piece suits, and unique melodies that sold me instantly. The lyrics are straightforward enough but don’t get me wrong — this record has soul to it. There’s so many times in this album you could lose yourself and picture the scene described in the lyrics. The guitars carry this album all the way. The production is stellar as well.

Brian Fallon is one of my favorite songwriters of this era. He’s simply one of the best. When this album came out years ago, I was working at a Italian restaurant with our bassist (James), and we would always play the record on a loop from start to finish throughout the day until closing time (we were the musicians of the restaurant so we had precedence over the sound system and its content). It was definitely one of the saddest things I’ve ever heard, but also one of the most amazing things I have ever heard. This was a very impactful album for me, and I’ve kept the somber mood of this record in mind for a lot of my songs.