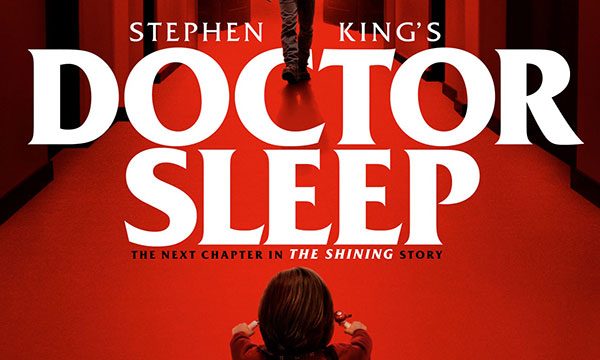 The first promo that I saw for Doctor Sleep was in a movie theater. It was done before a movie and had a featurette feel to it. Oddly, I couldn’t figure out if it was an actual movie or maybe a limited series for television. I also wasn’t sure if it was a remake or sequel to the original movie, “The Shining’. I only knew it was related to ‘The Shining’ because of the hotel and the twin girls. Once I discovered that it was a sequel and that it was based on a book written by Stephen King, I was definitely interested.

‘Doctor Sleep”, which should have been called ‘The Shining 2’ turned out to be a much better film than I expected it to be. Ewan McGregor plays the grown up Danny Torrance, son of Jack Nicholson’s character Jack Torrance from the original movie. When we first meet Danny, now Dan, he is following in the footsteps… of his father. In this movie, we learn more about what the Shining is and how different people that have it are using it for good or evil.

Rebecca Ferguson plays Rose the Hat, the leader of an evil group with powers called the True Knot. Kyliegh Curran plays Abra Stone, a young girl with ‘The Shining’ around the age that Danny was in the original ‘Shining’. The two of them wind up teaming up to fight the True Knot.

This is a very solid and entertaining film. Ewan McGregor’s performance of Dan as he goes through different stages of his life and Rebecca Ferguson’s performance as Rose the Hat are excellent. The movie has great visuals including Dan’s apartment and has scenes that take place in The Overlook from the original as well.

One of the places where this movie falls flat is in those new scenes at the Overlook, they do not achieve anywhere near the same intensity or creepiness of the original movie. In fact, the entire film has a very subdued tone compared to the raw, intense and real feel of its predecessor. Still, it’s an interesting movie for fans of the original who want to see where the story goes.