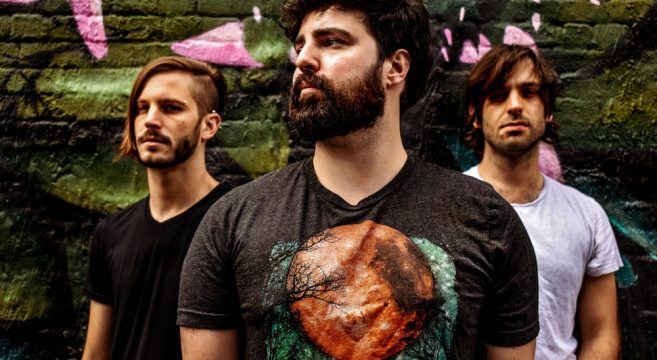 Ruby Bones creates incredibly addictive indie rock with a dash of pop that encourages you to hit the replay button right after listening. This perfectly describes their new EP Tooth. Obviously, the band knows how good it is because two of their members left the country right after it dropped instead of hanging around to promote it. Bold move from a bold band.

We recently met up with three fourths of the band (singer/guitarist Chris Fox, drummer James Janochain and guitarist Matt Cohen) in Nutley at Luna Wood Fire Tavern. Bassist FC Spies really missed out by being in Brooklyn that night. The band rehearses in Bloomfield so they wanted to visit an Essex County pizza place and Luna was on the list. The band told us the restaurant was chosen based only on the name so there is a marketing lesson here somewhere.

There was only one rule that evening: no mushrooms. Ed and I love mushrooms so this was a small disappointment for us but we decided not to walk out right then. I was chosen as the pizza orderer since no one else wanted the responsibility. I only made one error. We had two very similar pies but thankfully they were popular among the group so they went fast.

We thought five small pies would be fine but we ended up having to dare each other to eat the final slices. We did leave one man behind–a single piece of Luna White Pie. The menu said it came with fresh mozzarella, arugula, shaved Parmigiano, olive oil, and prosciutto. (No sauce). Salad on pizza wasn’t too cool and there was a LOT of salad. All in all, leaving one little slice wasn’t too bad for as much pizza as came to the table that evening. We tried to get our waitress to eat the sole remaining slice of salad pizza but even she refused.

The Margherita pizza came with tomato sauce, fresh mozzarella, basil & EVOO. It was a good classic slice that didn’t pull any punches.

Two pies ended up being too similar so we lacked a little variety but both were very good. Buffalo Chicken Pizza had breaded chicken in a spicy buffalo sauce, shredded mozzarella, drizzled with ranch dressing topped with parsley. And, Chicken Parmesan Pizza with breaded chicken, tomato sauce, mozzarella, served with vodka sauce.

Mezzaluna Pizza was the star of the show because it was half calzone and half Margherita pizza. Ben Wyatt from Parks and Rec came to mind to all as someone who would have been thrilled with the Mezzaluna. His love of calzones is only matched by everyone else’s hatred of them on the show. We all agreed that Ben was right and it was magical. There was a healthy amount of cheese in the calzone side to make it significantly different from the other half. Plus, the addition of the marinara dipping sauce made a nice change for the pizza crusts that were inevitable after five pizzas were eaten.

The highlight of the evening was meeting Matt Cohen, the newest band member, and hearing about the costumes he’s willing to wear on stage. The best one was this Aussie Cowboy from a show at Montclair Brewery last month. “He said he’d be down to wear anything when he joined to fit the vibe of the band, but never did,” Fox said. That finally changed. He continues, “FC found a cowboy costume left in a random Airbnb and brought it to the show, so we challenged him to live up to his words.” Challenge was accepted and Cohen upped the ante with the idea to go shirtless. Perhaps the third EP in the trilogy with have a country influence.

Conversation ranged from talking about people we hate (you’ll just have to guess about who they were… definitely not YDKJ’s 2016 Runner-Up Bad Boy of the Year, Adam Bird) and wine and cheese parties that the band has. It was a very cultured evening with these three gentleman of the rock stage.

On to the EP! Tooth is the second of three EPs coming out that will eventually be released as one compilation. 2018’s 3 song EP Laser was good but I think the band is really hitting the mark with the excellent and varied Tooth out now on Mint 400 Records.

The addition of Cohen on guitar is immediately felt on the super upbeat opener “Rooftops” where the guitars playfully mesh at a brisk pace. The sound is similar to Fox’s previous band Boxed Wine and is definitely a song to get the party started. “Don’t Lose Your Head” continues the positive vibes in a song with a heartfelt message to not lose hope in tough times. A message that is needed today more than ever. And with great guitar work, harmonies and hand claps everyone should be listening.

“Terrible” is in fact not. A song with driving rhythm that takes its time building reminds me of late-era Replacements in places (think “Talent Show”). “You’ve been feeling more dead than alive for a while” accurately nails the collective depression that we could all slip into. Which brings us to the stellar closing tune “Talk About.” Just Fox and an acoustic guitar begins the track which is an unexpected treat. There is a tenderness here that is sometimes subdued or buried in a lot of indie rock/pop. The song would fit nicely on a Wes Anderson soundtrack and by the time a touch of electric guitar joins in it was tough to suppress the big smile on my face.

You can catch Ruby Bones this Saturday when they play Indie Binge at Pet Shop in Jersey City with 30+ bands. The show is free and kicks off at 10:30 AM so get there early.