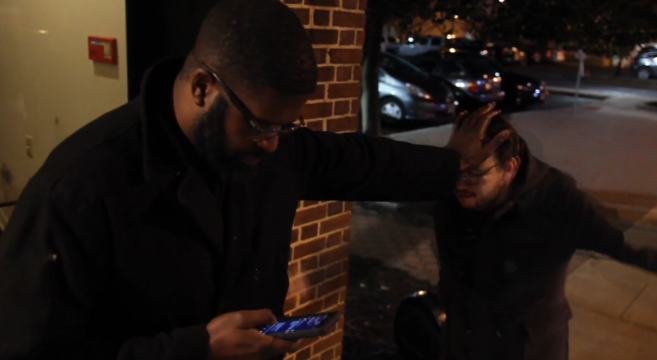 YDKJ Video Premiere: “Back of the Line” From Dave Mooney & Viewers Like You

I’ve talked to many bands over the years and they’ve all been there. Everything at the show is ready to go. Instruments plugged in, mics are hot, fans anxious to hear some music. And the one band member is running behind. However it isn’t often said member can’t get into the gig. More on that later. That is the premise of the fun new video “Back of the Line” from Dave Mooney and Viewers Like You and we are excited to premiere it today.

The Central Jersey, yes it exists, band have been playing smart indie rock going on 5 years now. Infusing elements of pop and folk, their songs are filled with catchy hooks and infectious harmonies. “Back of the Line” is certainly no exception. I was singing along after two listens.

Now about being blocked from entering your own gig. Sometimes the doorman can be a real hassle. Here 3143 Artist Management founder KL Martin dons his acting cap and plays the difficult to persuade guardian of the door. Standing at 6’10” he casts an intimidating shadow. Poor guitarist/vocalist Dave Mooney has to resort to all kinds of trickery in trying to gain access. Will he succeed? You’ll have top watch to get the rest of the story.

The song is off their debut EP Press Start out Friday on Mint 400 Records. With “Back of the Line” Mooney along with bassist Justin Franco, drummer Anthony Flora, and new keyboardist Kristen Leu have created a fantastic, upbeat song with pop sensibilities par excellence.

Speaking of Friday you can check the band out live when they play The Stone Pony in Asbury Park on January 31st. Joining them at the iconic venue is New Narratives, Biplane, The Clydes and Pioneer the Eel. Details here.