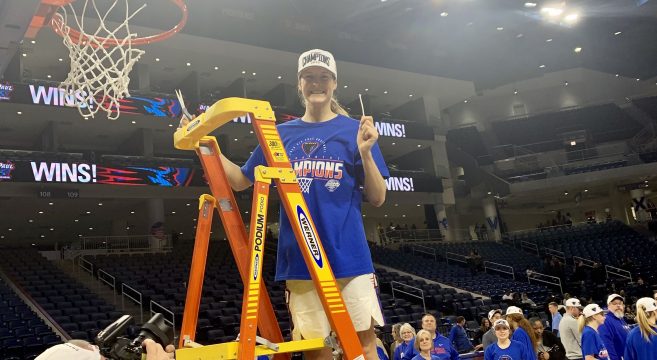 This is the week that we should have been watching the NCAA Women’s Basketball tournament’s Sweet Sixteen round of games. Now that all sporting events have been cancelled for the foreseeable future, we’ve been looking into NJ connections we have around the sports world. Today, we’re talking to Kelly Campbell — Wall resident, DePaul women’s basketball point guard, and three-time Big East Conference champion.

DePaul University (my alma mater) joined the Big East Conference in 2013 which meant that I could finally go support my college without having to travel into the Central Time Zone. Initially, we went to nearby Seton Hall to see the Blue Demon men’s and women’s basketball teams. By 2020, we had visited the campuses of Seton Hall, Villanova, Georgetown, and St. John’s for games.

A few years into our annual visits to the SHU campus for women’s basketball games, we noticed that we were not the only DePaul fans there anymore. Kelly Campbell, from Wall, NJ joined the Blue Demons as a freshman during the 2016-2017 season. All of a sudden, there were a bunch of Blue Demon fans with number 20 on their shirts behind the DePaul bench. We were excited and Kelly was a rock star on the court. Her freshman year, she led the team in three-pointers and was 10th in the country with her assist-turnover ratio. And, every year after that she just got better and better.

This 2019-2020 season was her senior year and she ended it with a nation-leading assist-turnover ratio of 5.9. Kelly also got her second career triple-double this season while averaging 8.3 points, 8.4 rebounds and 6.1 assists over 30 games played. She scored over 1,000 career points and is a Senior Class Award candidate, a two-time Nancy Lieberman Award finalist, a three-time Big East All-Academic Team member, and was named to the All-Big East Second Team this year. Oh, and did I mention that she and her team won the Big East tournament three times in a row?!

I got to attend the tournament this year and was able to meet Kelly briefly. A few days later, I asked her for this interview.

Amazingly, COVID-19 was only a minor concern at this point in early March 2020. Three days after the DePaul women won their third championship in a row, the men’s Big East tournament was cancelled and most other sporting events were cancelled that same week. It makes me even happier that I was able to attend this year’s tournament now that many others were cancelled including the NCAA tournament that we were hoping to watch DePaul do well in.

Kelly’s family was very friendly to us once they noticed that there were some non-Campbells with DePaul shirts at the East Coast games. Her mom and dad even made sure to invite me down to the courtside area after the championship game at Wintrust Arena.

Kelly graciously agreed to answer some of my questions after DePaul’s Spring Quarter, the NCAA tournament, and the rest of DePaul’s sporting events were cancelled last week.

Tell us a little bit about growing up in Wall Township.

I really enjoyed growing up in Wall Township. I live about a mile from the beach and spent as much time there as possible. Whether it was runs on the boardwalk or beach days, my family has always loved living so close to the beach.

You had quite an entourage of family members at the NY/NJ DePaul games. Was it easy to be distracted at those games or easier to play hard because there was all the support coming from the stands?

I am so grateful for the support I have had from my family and friends these past four years. Playing at the NY/NJ games always added a little extra nerves for me, but in a good way! I had to make sure I focused on doing the things I do best to make sure I didn’t get distracted by all the people I knew there!

Was basketball always your sport of choice?

Basketball has always been my #1. I played soccer and ran track growing up, but nothing did it for me like basketball did. I ended up quitting all other sports in middle school, because I wanted to play basketball all day every day.

What made you choose DePaul?

Before I even knew about DePaul, I fell in love with Chicago. After finding out that DePaul was in Chicago, I was extremely intrigued and took a couple visits. What sold me on DePaul was the continued success that they have had here (I mean how many NCAA tournaments in a row?!), as well as a coaching staff that believed in me and wanted to help me improve, and teammates that welcomed me into the family.

The dramatic end to the school year, basketball season, and your DePaul career must be quite a shock. How are you coping with missing the NCAA tournament and the last quarter of school?

It has been a rough couple weeks; it is crazy to think that it was only last week that we won the BE Championship. The cancellation of the NCAA tournament has been super upsetting for myself as well as many other athletes, as this is the most exciting time of the year and what we work so hard for! Regarding my team, I think we played some of our best basketball against Marquette in the finals and we had such high aspirations this year, so the cancellation of the tournament was really tough on us. I am very grateful that we got to play our conference tournament and end on a win! Missing the last quarter of school is really sad, but I am trying to see the bigger picture and understand that it had to be done for the health of our university.

What are your plans for the future?

I would love to play basketball professionally overseas for a couple years. After I am done playing, I would like to go back to graduate school to become a Registered Dietitian for a college or professional team. I would like to help educate athletes on how to best fuel themselves for optimal performance.

Tell us something we might not know about Coach Bruno.

Hmmm, something random is that Coach Bruno loves Diet Pepsi but he limits himself to two a day. He has recommended I mix it with iced tea and even orange juice. (I haven’t tried either hahaha)

Finally, what is your favorite place to eat in New Jersey when you are home?

Playa Bowls! They have the best acai bowls!

Copyright, You Don’t Know Jersey, LLC (2010-2022)
Pin It
Previous post:
Beats Subterranean: The Future is Now – Bobby Doc Has Arrived
Next Post:
Deal Casino Do It Their Way on New EP ‘Woof’