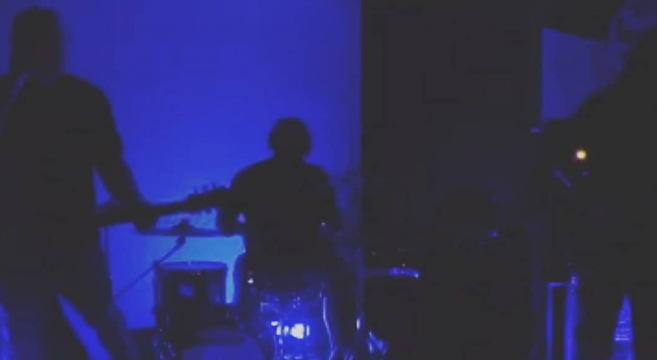 Greygoesblack is an indie band that uses elements of electronic and drone rock to create sonic landscapes with a sometimes dark undertone. This is,of course, like candy to my ears. After 2 EPs the band released their excellent full length album And Inside There Was Only Water which found the trio riding down a moodier road. Greygoesblack is Matt Casoni on guitar/vocals, James Malizia Jr on bass/synth and our contributor today Steven Moraghan on drums/electronics.

The band recently signed to UK label Shore Dive Records and after releasing EP Records Over Wire last year they are currently working on their next record. Expect a single in April/May.

Most kids sneak into their older brother’s room looking for his Playboy stash. I was fortunate enough to find this album.  Up to this point it was mostly Eagles and Beatles albums my parents had laying around.  I had already begun playing drums and never heard anything like this. Just the wall of sound and speed. The beginning scream/laugh of “Suicides an Alternative” just blew my mind. I wore this album out. Just an all around perfect example of skate punk hardcore. You can’t listen to this album and not picture someone somewhere shredding a half pipe.

Again stumbling across something but this time in my cousin’s room. She let me take the album home. This began my first real obsession with a band where I had to have everything I could find with their name on it. Shirts, posters, records, singles and, embarrassingly, even the haircut. Just everything. They always had this harder, buzzsaw kinda guitar edge but there was a love song wrapped in most of them. Prob my fave track on this album would be “She’s the One.”

Ripping Corpse – Dreaming with the Dead

There was rumbling and rumors in the NJHC scene about a band that sounded like Satan himself. A scary, brutal band playing faster and heavier then anyone else. Singing about digging up dead bodies and other horrific things and rumors swirled did they really do these things?  The musicianship was second to none. Hands down Brandon Thomas is one of the greatest drummers ever and if YouTube was around back in those days they would have been huge. Although I like the slower version of “Rift of Hate” on the Splattered Remains demo, the double bass beginning of “Anti God” shows you what a monster drummer Brandon is. In a just world that second album would have been completed.

I have a confession to make. I really didn’t like Pablo Honey when it came out. I thought it was just another record company attempt at alternative rock but I stayed along for the ride and then The Bends came out.  There is such a sadness to the record. Thom Yorke hits all these one liners at the end of songs like ” if I could be who you wanted all the time”.  This band was def an obsession with me. I have crates and bins full of vinyl and Japanese-only single releases and CD after CD of bootleg concerts. It really came along for me at the right time from the guitar work to the whale sounds sampled and buried through a plethora of effects. Just a beautiful record from start to finish.

Yes, I know, two times on one list. But again a record that came out at the right time. It’s so warm and analog sounding but electronic at the same time. This opened my eyes to so many bands. I remember staying up all night with my dial up internet searching message boards trying to get the leaked album. I would download a song and listen to it non stop in headphones until the next song downloaded. From the vocal effected beginning of Kid A, the horns and distorted bass in “The National Anthem” to the guitar drones of “Treefingers.” All around a great blend of electronics and rock and just an amazing band live as well.

This is it. Hands down the most important album on my life. I knew them as a rock band that kinda were the black sheep of sub pop. Congregation is a great album but this album spoke to me like no other. You know the old story boy meets girl. Boy and girl smash each other’s hearts against the rocks. I was heartbroken and def more at fault then her. This record summed up all the regret and anger. I always loved the way they began the album with an intro that would later resurface as a chorus in another song. And if you were lucky enough to see them live somewhere between this album and 1965 you got to witness one of the greatest live bands to walk the earth. Highlight track without a doubt would be “Debonair.” Read the 33 1/3 book written about this album to get all the gritty details and behind the scenes of Greg’s record of heart break and regret.

This album dragged me down a dark rabbit hole of death metal for a long time. I heard some things similar like Slayer and Kreator and Venom but this record really pushed the death metal full force for me.  Barney Greenway had such a powerful voice and that snare crack was so full of reverb.  Guest appearances by the likes of Glen Benton and John Tardy led me to their bands which led me to other labels and other bands. This album was def a gateway drug so to speak and to realize they are still pushing the envelope of brutality to this very day is amazing. Standout track is “Suffer the Children.”

Probably the band I dream of being in more then any other. Beautiful reverb soaked vocals and delays and drones. Soft brush work snares and big bass drums. Just a great headphone bliss album. A kinda lay on the floor with the lights off and float into dreamland album. Best track: “Stockard Drive.”

I was already into hardcore pretty deep and it seemed like everyday another dubbed cassette was passed around with as many bands and songs that could fit. I got a copy of the Tied Down cassette and it blew my mind. So raw and brutal. John Brannon’s vocals sounded like he gargled with sandpaper. It was fast, raw and distorted and the lyrics were angry. John continued to Laughing Hyenas and Easy Action, both amazing bands, but Negative Approach was the top. It was so important to me I tattooed their name on my leg. Stand out track is “Evacuate.” Most people are gonna say “Tied Down” or “Nothing” and while they are great tracks “Evacuate” is heavy and brutal, lyrically angry and depressed.

Judge – Bringin’ It Down

So I was heavily into hardcore and straight edge. These guys took the Minor Threat beliefs and added the grit and toughness of NYC.  I felt more like them when I was close-minded teenager…just get away from me, I don’t want your alcohol and drugs. I felt all of that was a waste of time. The myth of Mike Judge rumbled through the scene. You would hear all kinds of stories about him beating up Nazi gangs and fighting multiple people at once. You can watch the doc on YouTube about the band. It eventually brought in a whole kinda tough guy scene which pushed me out and away like many other people. But this album was darker and more brooding. Kinda hardcore this album had a little more self reflection then the just beat your ass fed up feelings of the 7 inch. Which only made it heavier. This album came back to me when my friends and I started to get older and paths split. Best track? It’s a tie between “Like You” and “Where It Went.”

Copyright, You Don’t Know Jersey, LLC (2010-2022)
Pin It
Previous post:
Deal Casino Do It Their Way on New EP ‘Woof’
Next Post:
Picture of the Week – Cycling Weather