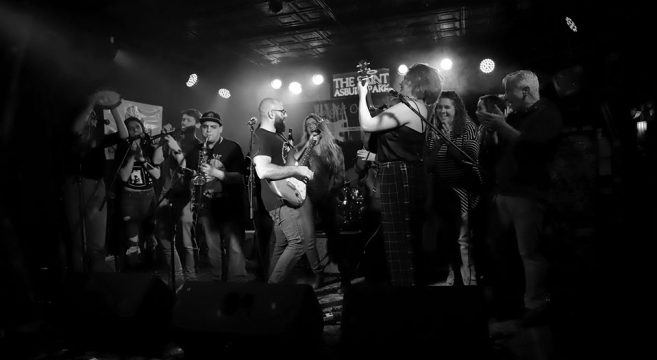 Matt Fernicola is a master of controlled chaos; something for which his Foes of Fern have come to be known. Starting initially as a loose collective of musicians, the only consistent ones being Fernicola himself and vocalist/tuba player Victoria Laurence, the Foes have since stabilized around an expanded lineup that can reach as many as a dozen-deep on stage. Fern writes big songs with even bigger hooks, an aesthetic that “Money Man” with its horn-driven hooks and insistent drumming continues to emphasize.

Visually, the Foes’ latest effort keeps it simple. No elaborate bicycle choreography, or Fern look-a-likes here. It’s just the Foes acting more like – well – friends. Whether they’re throwing Monopoly money at drummer Andrew Oliva or catching producer/engineer Joe Pomarico lounging behind the scenes, the “Money Man” video emphasizes a certain togetherness that has made The Foes of Fern one of the most consistently entertaining bands making music today.

You can catch The Foes of Fern at The Wonder Bar on Saturday March 7 th with Cat London, Honey Wild, The Dead Flowers, and The Extensions.