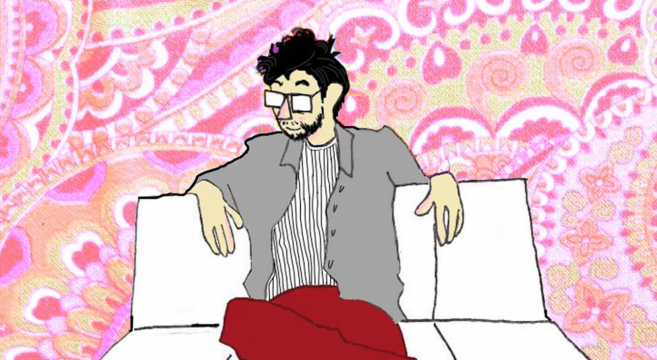 When it comes to being a modern renaissance man, local NJ singer-songwriter Brian Erickson knows a thing or two. The singer-songwriter has amassed a strong following thanks to his tenure as frontman of local stalwarts The Paper Jets and his current role as lead vocalist and songwriter for up-and-coming act The Extensions, not to mention his recurring role as host of the livestream series One More with Brian Erickson and as an active promoter under the name Red Pants Productions.

Despite such a well-rounded resume, one crucial achievement was missing–a solo record. That has now been fulfilled with the brand new Little Secrets and the results are yet another tremendous achievement in an already impressive catalog.

Little Secrets is a warm, nostalgic, and layered collection of songs that reflect both Erickson’s personal observations and vast influences from The Beatles and Brian Wilson to early aughts indie folk and rock. Each track is richly crafted and underneath soulful hooks and arrangements lay some of Erickson’s most insightful and honest songwriting yet.

Much of the material on Little Secrets centers around nostalgia while looking towards the future. It’s a complex theme that’s well-established by opening track “Shore Towns.” It’s a breezy piece of indie-folk which chronicles yearning for a lost love on the Jersey shore.

Elsewhere on the record, the potential of a new love is explored on the gorgeously-arranged shoegaze of “All That We Could Be” and the title track “Little Secrets” manages to filter a sly commentary on miscommunication through a sunny 60’s-esque piece of McCartney pop. The themes here may seem subtle but the layered perspectives and production truly allow the material to resonate and immerse listeners.

Other highlights that are indicative of the album’s true range and craft are lead single “Another Unfinished Novel,” which tips its hat to 90’s alt-rock and indie, and the wistful acoustic folk of “Left To Find” which details a relationship in the decline. They are prime examples of both the sonic and thematic richness carved out along the record. What also allows Little Secrets to be an engaging experience is how personal and intimate the performances feel. Erickson manages to instill each track with a genuine humanity and warmth which results in some of his most immediately compelling work thus far.

Production-wise, Little Secrets benefits from its organic and lush arrangements with songs that are tightly paced and sequenced yet still managing to contain atmosphere and texture. Many of the songs here may appear to be simple acoustic numbers but a closer look reveals their attention to detail and sophisticated presentation with equally strong harmonies to boot. At 10 tracks the album is a brisk listen but thankfully, despite the short running time, each track presents itself as distinctive and is able to leave an impression on listeners all while without overstaying their welcome.

For someone who has been performing and creating music for over a decade, one wonders how he can continue to surprise and engage listeners. With Little Secrets, Brian Erickson offers a more than worthy showcase of his rich talents while crafting some of his most deeply felt material to date. There’s no shortage of uncertainty these days, but what isn’t uncertain is that Little Secrets is a genuine artistic triumph and one of the year’s most rewarding records. This is one secret that everybody deserves to be let in on.

You can check the album out on Spotify and Bandcamp.