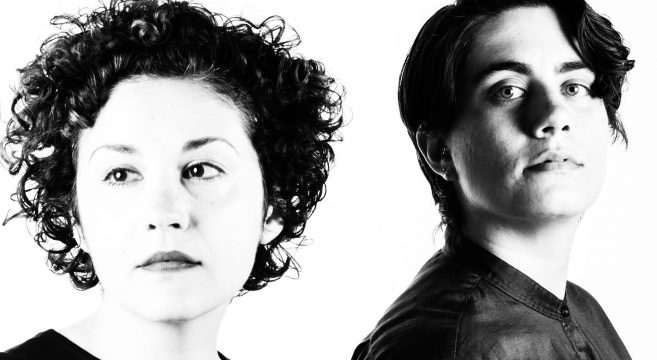 Montclair band, Bern & the Brights, have been crafting excellent indie rock with touches of folk, electronica, and dream pop for over a decade now. That is a testament to bond multi-instrumentalists Bernadette Malavarca and Catherine McGowan have forged over that time. They are also known to be advocates of human rights for all. It is with that in mind that we are thrilled to premiere their latest video “Peace, Love, Equality, Justice” today.

When video surfaced of the murder of George Floyd by Minneapolis police officers back in May it stunned and angered the world. It wasn’t the first time this had happened or the first time is was caught on camera, but it seems to be the one that made the rest of America really sit up and notice. That includes musicians. Bern & the Brights knew they needed to say something.

“Peace, Love, Equality, Justice” starts with a some gorgeous synth over a drumbeat as images from a Black Lives Matter protest march stream across the screen. “Boom boom boom” is seen on screen as Malavarca sings the words. Yes, this is a lyric video. Bern & the Brights want to make sure you’re getting the message. The booms of guns and bombs will lead to the booms of thousands of people’s feet marching for what is right. No one should ever have to plead “please, please, please” just for the right not to be murdered by those sworn to protect.

The video, created by Stacey Lee, ends on a message of hope. Seen on the pavement during a peaceful BLM are signs reading We Are Together. Standing together for what is right is the only way towards progress.

Bern & the Brights will be releasing “Peace, Love, Equality, Justice” via Bandcamp on Friday 10/2 followed by a broad digital release later in the month. Like most bands they are not touring but hope to continue releasing songs as they complete them as part of their song series Overlove (the first song of which was released in June, “Lola.”).

First, how have you both been dealing with the pandemic?

Probably like most of us, we have been taking it one day at a time, experiencing ups and downs, and trying to ground ourselves in whatever ways we can: music, physical exercise, staying connected to close friends, nature. Catherine’s leaned into bike riding; I have delved into Zen Buddhism. That said, no matter our efforts to keep normalized, what’s going on is completely abnormal, and we feel it, and sometimes just need to scream into the night sky, if that makes sense. Priorities have become pretty distilled: staying safe, staying healthy, staying relatively sane.

How do you manage to stay creative during this time?

In the recent past, I’ve been doing much of the writing and recording for B&TB, because, for me, music has always been where I go for everything: sometimes for therapy of sorts, so by default, that churns out content—and some of it is shared publicly, some of it lives and dies on my phone or in my notebook. But in general, some of our more collaborative work has been tough to rise up to, or simply make happen, due to limitations on getting together with people, or frequenting spaces where it’s okay to play loudly. That takes a different type of bandwidth that seems limited at the moment.

As a band that has always advocated for equality why was it important to write a protest song about the murder of George Floyd?

There was just so much noise and deflection and distraction in the aftermath of his death: I felt compelled to get to the root, cut to the heart of the atrocity. So many narratives somehow starting spinning in a direction that shrouded that plain disturbing truth—we all saw the cold disregard for his life, we all saw that dehumanization. That cannot be erased, and we need to look at that, and ask, “How the hell did we get here?” and take it as call to rise up to stop dehumanization. As a society, we are stuck in a paradigm of dominant/nondominant dichotomy; we are still a society that needs an “other.” Until we end that thinking, none of us will be free. “Peace, Love, Equality, Justice” is a straightahead song underscoring that idea; yes, it’s aspirational and difficult to achieve, so let’s get going on it now.

Do you think the social isolation that COVID-19 brought on has made everyone pay greater attention to important issues like Black Lives Matter?

COVID-19 caused a “pause” on our normal; I think it forced many of us to slow down, or to confront major human things, like loss, uncertainty. This space, for lack of a better word, gave some of us a moment to actually feel our feelings and think our thoughts, and, say, “Wait a minute! There are some things we need to raise hell about here. Now, because now is all we have.” Our go-go-go society, and instant-gratification culture poses the danger of making us dumb and complacent. So busy, we are burnt out and shut down, and not noticing the big picture. I think the “stop” of normal allowed critical thinking to arise. That’s not a complete answer, but I do think that is partly what has happened.

Are you hopeful for the future?

Not for the immediate future (sad to say!), but I am hopeful that these trials we are facing individually and collectively will push many of us toward spiritual growth and usher in newness and change. What that newness looks like, I am not sure.