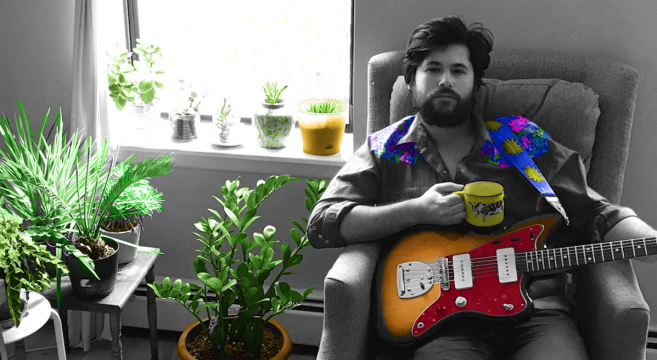 CR and the Nones – ‘Living in Fear’ – Album Review

There’s a bait and switch at the start of CR and the Nones Living in Fear that sets a perfect precedent for everything that follows. “Stasis” starts with a heavy drone and kick drum stomp that leads the listener to believe an impending wave of distorted guitar is about to break and crash out through the speakers. Now, if you’ve followed NJ native Chris Gennone through his previous outings with the Degenerates and Winnebago, you’d be more than correct with this assumption.

Yet, what happens instead is magical. The drone fades away into an immaculately melancholy guitar that sounds just like daybreak, like the start of the Lion King in sad bastard mode. Suddenly the vision starts to become clear. This is a record of new beginnings, of making peace with the past while finding a way to move forward. “You said you can’t change me / but it’s happening already” is the defining lyrical motif here, and the music underlying the sentiment couldn’t be more reflective of that feeling. There’s a steady build to the rest of the piece, a slow moving motion of things becoming grander and bolder before reaching a catharsis that sets the tone and slips right into the rest of the record.

Standout single “The Punchline” recalls contemporaries like The War On Drugs and Kurt Vile, with an abandon of swirling guitars and extended riffing that would make J. Mascis proud. It makes sense that Jeff Zeigler took on mixing duties (after working with two of the aforementioned artists) and here he provides a nice sheen to every track that enhances the beauty without sounding in any way over-produced. That focus on instrumental over voice continues on “Empty Street,” crafting a sonic enclave for the protagonist to opine on lost love and question past decisions.

“Judgement Day” is subtly the best song of the batch, with a completely realized warmth that encompasses both the track and listener. “There’s a drink with my name on it / telling me to stay” is a lyric that Waits and Dylan somehow never conjured, yet here it is, crystallized in a song that hangs with the best of both. Now if only life choices could be so simple.

“Two Ships” follows as a reprieve from heavier themes and acts as a sullen break before the next wave comes crashing. Underscored by the saxophone of Harrison Bieth, Gennone proves he can sing with the best of them on “A Hard Man To Find,” an opening line belted like every overly-earnest late 70s heartland rocker that has their roots dug into the center of this album.

Also worth mentioning is an eschewing of traditional song structure that I’ve only picked up on repeated listens, slowly realizing that some of these tracks have only two verses and hardly a chorus. Yet sonically, they come across as complete pieces, small vignettes into trying to capture an exact emotion for a fleeting two minutes. Somehow it just works, nothing feels undercooked and everything fits in it’s place.”Whispers of Time” is an easy example, hitting like the best Strand of Oaks’ tune and dripping with the same sonic blood. Plus, If anybody’s ever sang the phrase “I wanna grab life by the balls,” chances are that it’s not as beautiful as it is on “The Back Door.”

Closing out the record are trip-ending pieces “Home” and all too appropriate “My Epic Conclusion,” the latter swinging into alt country territory with shimmering pedal steel and classic Neil Young vibes for days. This record might indeed be a breakup record, but over the journey it easily becomes more than that. I’ll let the last lines sum it up:

“The more I think about it /you’ll be lucky if you’re around / to see my epic conclusion.”

And with that, the Boak abides. We’ll see him again on the next record…

Highlights: “The Punchline”, “Judgement Day”, the textures of Andrew Merclean

about the author: Chris Fox

Chris Fox is a singer/songwriter from Rutherford, NJ. As a member of Ruby Bones, Boxed Wine, Glitterbitch, and other solo endeavors, he continues to prove and live by the old adage “a communication degree is worthless.” When not making music, you can find him judging the music of others, sometimes in print.