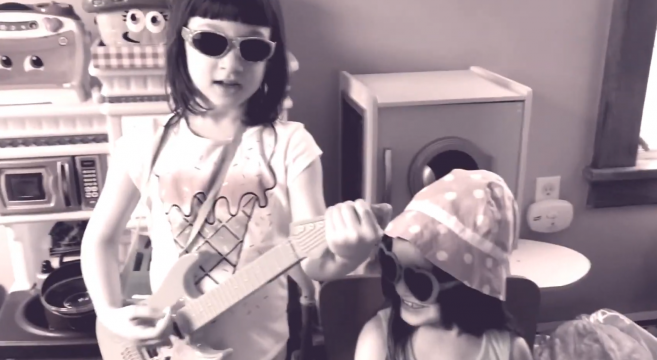 Video Premiere: “Love Like Razorblades (For Twin Band)” from Fairmont

If you know the music scene in New Jersey, chances are you’ve run into Fairmont guitarist/vocalist Neil Sabatino. Not only does he front a band that consistently creates exceptional indie rock while running his label Mint 400 Records, he also puts on countless shows that highlight some of the best music in the state. And if you know Neil he is not a guy who wears his emotions on his sleeve. Whether excited about having a great set or pissed because the bass cut out on a show he is hosting he is basically Mr. Cool Under Pressure. That is why we are thrilled to premiere the new video “Love Like Razorblades (For Twin Band), a love letter to his daughters.

As the video begins over sweetly strummed guitar we are introduced to the stars of the show–Sabatino’s daughters. These young ladies certainly are not afraid of the camera. Whether acting like a kitty cat, making faces, dancing in the sunshine or debuting their 2 piece band, they act like they were born to do this. It also looks like they are having some incredible fun.

I asked Sabatino about the inspiration for the song. “For the music part of this song it is definitely a Fountains of Wayne type vibe. Originally I had written a handful of songs that were these 1950’s chord progressions and this was the only one that came out pretty good so it ended up on the album.” He continued, “As far as the lyrics it’s completely about my daughters, mostly my youngest who is a very feisty five year old. The reason the title of the song is tagged (For Twin Band) is the that is my daughters imaginary band that they front.”

Of course Sabatino always likes to have some lyrical mischievousness going on. Love here is not compared to flowers and puppy dogs. “Her love is like razor blades, her love is like a hand grenade” he sings with a wink.

How did his daughters like being part of dad’s video? “They loved getting to make a mess all over the house and running and jumping on the furniture. It was a long pandemic and it was something fun to do. They loved dressing up and getting to act in it. They also watched the video once it was done a few hundred times.” I suggest you also watch the video a few hundred times. It is guaranteed to bring a smile to your face.

Now entering the 20th year of existence, the band shows no signs of slowing down. The song will be on Fairmont’s upcoming 11th album “Liminal Spaces” set to be released on November 20th.