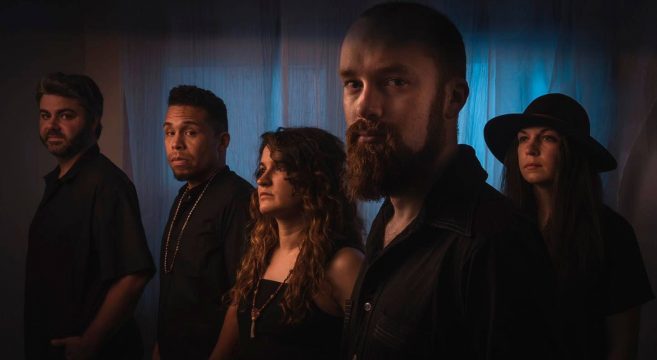 Wow this year sucked, amirite? But before we embark upon this exchange, I’d like to pay proper respect to friends who lost loved ones, to frontline workers who remained at their posts, to those dealing with poor health, or job loss, or even something comparatively simple like not being able to see your family or friends this holiday season.

Before we get to our lists, we wanted to share some necessary resources. If you’re struggling with your mental health, consider reaching out to NJ Mental Health Cares. And if you’re not sure what your food situation is going to be like, both Asbury Park Dinner Table and Trenton Area Soup Kitchen have you covered. Just show and go – no questions asked, nobody gets turned away. There’s also Community Food Bank of NJ, or Foodpantries, a city-by-city list of where to find food banks and subsidized groceries.

Whatever we went through this year, it was still comforting to see so many exceptional local artists still deciding to release music. By and large, our scene stepped up and as a result, 2020 became one of the more rewarding years in recent memory. While release schedules were absent prominent artists like Levy & the Oaks, Dentist, Des & the Swagmatics, or Rachel Ana Dobken, plenty of heavy hitters still stepped in. And more than a few knocked it straight out of the park!

1. Chill Smith – “Your Ex is a Dummy” – Far from being a standard-issue breakup song, Smith instead creates a pseudo slow jam full of introspection, comfort, and self-care – something we could use as much of as possible right now. It’s vulnerability, sure. But when it’s at the cost of knowing exactly what you’re worth, it’s absolutely priceless.

2. Little Hag – “Tetris” – Not everyone gets to make two debuts, but Little Hag, the project of former solo artist Avery Mandeville, accomplishes that mean feat with this career highlight. “Tetris” walks the thin line between coy and sarcastic; longing and knowing. And just as you think you’ve got the game solved, it’s over.

4. Drew the Recluse – “Fade” – Drew the Recluse released a string of good-to-excellent singles in 2020. But it’s the heartbreaking “Fade” that hits hardest. New Jersey has produced its fair share of great singing MC’s. And on “Fade,” Drew’s voice reaches heights so stunning that if he keeps it up, he’s going to find himself in their company very soon.

5. Lowlight – “Julian” – It wouldn’t be a year of music without Lowlight, one of our most prolific bands, releasing something. At nearly eight minutes, this guitar-and-keyboard tornado kicks up a compelling new direction only hinted at on previous extra-long excursions like “Birdman” or “Waves.”

6. Apollo Sonders – “Love Me” – Apollo Sonders gave us a necessary shot of joy when they released the quarantine-inspired music video for “Love Me” back in April. The song is anchored by powerhouse singer Gabrielle Richa and pianist/harmony vocalist Laura Canico Padilla and continues Apollo Sonders’ fast-rising trajectory as one of New Jersey’s most gifted up-and-coming bands.

7. Brianna Musco – “Never Stay” – It’s been a pleasure watching Brianna Musco go from coffeehouse folkie to ambitious and fully-inspired modern pop diva. Her 2020 kicked off with an extensive European tour. But once lockdown hit, Musco circled the wagons, doubling down on an already steady content stream before capping it off with the nervy, skittering “Never Stay.” And the best part is, despite already reaching nearly 200,000 streams, this feels like just the beginning.

8. The Vaughns – “All Weekend” – After the departure of founding members Dave Cacciatore and Tom Losito, singer Anna Lies and drummer Ryan Kenter regrouped with this striking, synth- soaked summer anthem. You can almost feel the humidity on this one. How about a quick jump in the pool, Ry?

9. Anna Oh – “The Way I Disappear” – It was a good year for Northern New Jersey singer/songwriters and Anna Oh is right toward the front of the pack. “The Way I Disappear,” with its breezy SoCal pace and Mellow Mafia-style harmonies, ensures she won’t be losing her spot anytime soon.

10. Julia Kirk – “Alter-Ego” – My favorite new artist dropped her first single by surprise and wow, it doesn’t disappoint! Kirk sings like how you’d imagine the late afternoon would sound if it had a voice. “Alter-Ego” is a fitting debut for this hyper-talented songwriter.

11. Rory D’Lasnow – “An American Lie” –With an unusual guitar-playing style (he literally plays upside down) and voice sincere enough to make you believe whatever he’s singing, D’Lasnow invites us to raise our fists to this fitting, and timely anthem of American reckoning.

12. Jackie June – “Can’t Quit You” – Since opening for teen idol Tiffany toward the end of 2019, Jackie June has broken out as one of our most exciting vocalists. Early 2020’s boisterous “On the Move” was a step in the right direction, but “Can’t Quit You” feels like the full realization of June’s impressive pop instincts.

13. Ghost Harbor – “Plague Doctor (Bonds)” – Caroline Davidson, a poet by trade, paints with shades of Tori Amos and Kate Bush to create a perfect slice of baroque pop. Most people know her for her art space (also called Ghost Harbor) but don’t sleep on Davidson’s provocative songwriting, either.

14. FlexiGlass – “Shorthand” – Matt Daniels is one of our community’s most visible figures. But when he’s not leading a protest, hosting a fundraiser, registering people to vote, campaigning for progressive politicians, or curating guests for the Only Posers/EdVice podcast, he’s leading FlexiGlass, one of the scene’s most fun bands. “Shorthand” deals with the ever-pervasive Fear of Missing Out. But the video gives us something we could all use a little more of right now: a warm sense of togetherness. Go check it out!

15. Bryan Hansen Band – “Waiting for Tomorrow” – The Bryan Hansen Band follows its triumphant 2019 LP Gas Money with a cautionary tale. Swapping their usual high-wire interplay for the blunt force of just three chords, Hansen, Will Blakey, and Cwan Merritt know that sometimes to get the message through, you need to hit as hard as you can.

16. Deirdre Forrest – “Timber” – Working on songs piecemeal throughout the past year or two, Deirdre Forrest, one of the scene’s most electrifying vocalists finally started to let a few of them go. “Timber,” a set list staple, has long been a favorite and a hopeful indication of more music to come!

17. The Cold Seas – “This Drug” – A menacing ceiling of languid analogue keyboards hangs extremely low over “This Drug,” the bleary-eyed new single from The Cold Seas. Chad Sabo’s voice keeps the whole thing grounded atop what I can only describe as the “hazy chill” of the song’s production.

18. Dano – “Girlfriend” – The winner of the anti-Valentine’s Day songwriting contest, Dano’s sprightly and infectious YouTube-only single was an early 2020 highlight. While she’s not slated to release her EP until 2022, she’s got an excellent YouTube series called ‘Rule Your Sound’ worth checking out in the meantime!