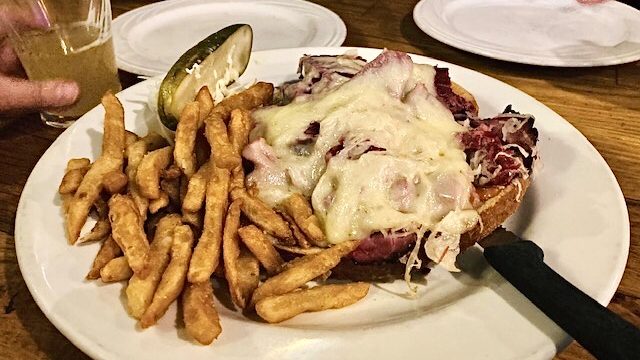 Something About… Hailey’s Harp & Pub in Metuchen

Walking out of divorce court alone after 22 years of marriage in 2012 was at best, anti-climactic. I walked out a little dazed and realizing 1) I was hungry and 2) I probably had a lot to learn about being single. This included learning to embrace dining alone socially and not just for sustenance. So, I grabbed a book, headed to Hailey’s Harp & Pub at 400 Main Street in Metuchen and basically never left.

My first meal as a single person was fish and chips at the bar. I didn’t need the book, as I chatted with the person who would later become my first date in 25 years. That relationship fizzled as rebounds should but not before the pub became one of my favorite places to eat and well, just to “be.” Live music, trivia, karaoke, sports and frequent special “foodie” events kept me, alone and with a new circle of friends, entertained. However, I assure you I would not still be spending my time and money there if it weren’t for the food.

Driven largely by the then-chef/bar manager and now owner, Moshe Atzbi’s creativity and skill, the menu is a brilliant balance of traditional Irish pub fare and seasonal, upscale choices. The pub is never the same experience twice unless I decide I want it to be. With burgers cooked to perfection, Irish fare, hearty salads and sandwiches and themed prix fixe dinners it’s hard to know where to begin.

How about I let you read the menu and events page for yourself and just tell you about my most recent visits there? I grabbed a table for one on January 24 to toast the return of the Irish brunch. Sure, you can just order eggs and hash or soda bread, but that’s not my style. I like a brunch that means I don’t have to eat again for the rest of the day and the Irish Breakfast (shown) delivers. This platter features an 8 oz. skirt steak with two fried eggs, Irish bacon, grilled cherry tomatoes, an Irish banger and Irish beans. Add home fries if you are not rationing carbs like me and you’re probably good till the next day. Another thing that makes Hailey’s exceptional is their ability to cook a steak, no matter the cut or how thin or thick, perfectly to order. For me that is the ever elusive “medium” and they nail it every time.

A close second choice is the Ploughman’s Lunch with Irish banger, Irish bacon, cheese of the day, sliced apples, toasted French bread and an egg. The common denominator here is the banger. ALWAYS GET THE BANGER. Crispy on the outside and tender on the inside, mild yet flavorful, with mash or without…don’t skip this authentic Irish sausage.

Fast forward a week and I am back with three friends, one of whom has not eaten at Hailey’s before. There’s live music (as there is at least 4 days/nights a week) at an appropriate decibel level and we’re comfortable with above and beyond safety and distancing protocols. My friends are into the beer selection (which includes Metuchen based “Brainy Borough” brews) and checking out the new cocktails but I’m buried in the menu. I’m looking to try something new and knowing I’ll find it in the long-term seasonal specials. (Side note: for the more adventurous, experimental classic/retro cocktails and espresso one can simply go around the corner to Hailey’s newly expanded, quieter, and distanced space, the Parlor…but that’s another post….)

My friends don’t frequent as often as I do, so they went traditional with a few plates of buffalo wings and open faced Ruebens on rye with Guinness-braised corned beef, pastrami, sauerkraut, melted Swiss cheese, Russian dressing and fries. Familiar food, done better is their general consensus. Do not discount the slaw on the side! It’s some of the best I’ve had. Nothing on any of Hailey’s plates is a throwaway. A tiny cup of slaw or any the homemade sauces or mustards get as much attention from the kitchen as any of the main dishes. Familiar comfort food but done “way better” is their consensus.

Despite swearing they’ll never finish it all each and every one of them does. We take our time because it’s just that kind of a place for a group meal. Savor every bite end enjoy each other’s company while the staff keeps us well served and not rushed. I refrained from diving into their fries and wings and saved myself for my own plate, the Chicken Jager (below). Fairly new to the menu it had me at “bacon” but not just any old kind of bacon. It’s a hand-breaded chicken breast topped with a creamy mushroom and bacon sauce.

Mo and his kitchen know their sauces. This one is proved worthy of the ranks of the other sauce standouts on the menu like the like Gouda beer sauce, Jameson whisky gravy, creamy spinach sauce and horseradish honey mustard to name a few. They also handle breaded chicken as well as they do their steak. It’s moist inside and crispy outside with beautiful color and flavor, not soggy at all. I subbed spinach for the potatoes as I often do, not just to cut carbs but because it’s always tasty and well prepared. Never watery as spinach can sometimes be (did I mention nothing on the plate is ever treated like second class offering?) I finished every bite and manage to suppress my urge to lick the last of the sauce off the plate. I dub it my new favorite dish but no one believes me. I am just not a one-dish kind of gal and everyone knows it. Monogamy has no place in my food relationships.

Despite saving all my carbs for the week up to splurge on one of their homemade desserts I can’t manage it and finish with an Irish coffee instead. I’ve previously had and enjoyed all three; apple strudel, Irish custard and German chocolate cake with layers of caramel, coconut, and pecans and topped with chocolate frosting. Trust me and make a special trip with an empty stomach for one of those.

No one else at the table partakes either, claiming to be too full but once they see my Irish coffee (made to order with Bailey’s) arrive they follow suit and get her own dessert drinks. Two traditional Irish coffees with whiskey and one “Peanut Butter Poke Cake.” The latter is Peanut Butter Whiskey, Stoli Vanilla Vodka, Bailey’s Irish Cream, dark crème de cacao, house made whipped cream, shaved chocolate and is slurped up so fast I missed the photo op.

There’s tons of good food in Metuchen and tons of good people. The management at Hailey’s supports the community in more ways than I can explain here. Not just the usual fundraisers and sponsorships either. If a resident has a problem like an illness or house fire or in my case long ago, an accident or the local food bank is running low, they are the first to step up every time. Meals, donations, organizing others to help, whatever is needed without hesitation and often without any recognition.

My town has more than thirty independently owned restaurants within its less than 3-mile borders and I plan on sharing as much of it as I can with you. I’ve even recruited locals to send me their food pics so I can feature their “Word of Mouth” suggestions and cover more ground.

For me it all started at what the locals simply call “the pub” and I am not tired of it yet so that’s why I started you here too. Be sure to come back for more because if you don’t know Metuchen, you know don’t know Jersey—like, at all.

Copyright, You Don’t Know Jersey, LLC (2010-2022)
Pin It
Previous post:
From Canvas to Comedy: Interview With Kayt Hester on Her Pivot from Tape Art to Stand-Up
Next Post:
Food Picture of the Week – The Chapo from Ciao Bagel & Deli