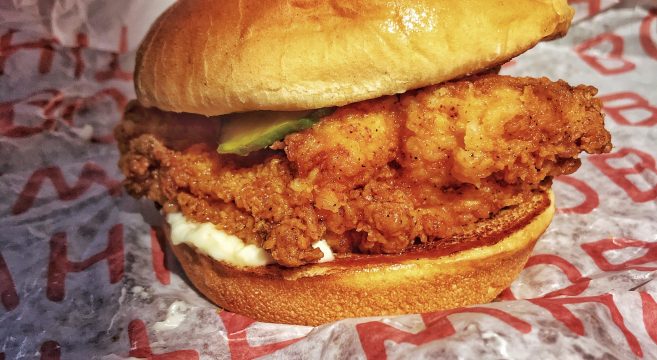 It’s springtime in Jersey City. It’s time for those long walks alongside the Hudson River, CitiBike rides dodging downtown traffic, sipping iced coffees on a park bench, and the refreshing, wafting smells of salt water in the air. And at Bobwhite Counter in the peaceful Paulus Hook neighborhood, it’s time for fried chicken sandwiches.

I’m embarrassed to admit that my initial question upon arriving at Bobwhite Counter was, who’s Bobwhite? I later found out that a bobwhite is actually a type of quail. Whoops.

Bobwhite Counter originally opened in 2012 in New York City’s Lower East Side, but expanded to Jersey City last year. Bobwhite Counter specializes in fried chicken and other Southern-style staples like mac and cheese, biscuits, collard greens, and coleslaw. Inside, Bobwhite Counter is fairly spacious with its name-sake counter and stools at the front and tables outside.

The first thing I noticed was how moist and juicy the chicken was, and immediately picked up some peppery notes. The chicken wasn’t incredibly crispy but it was light, flakey and satisfying. Together with the sweetness and brine of the pickles and the thin covering of mayo, the sandwich tasted so deliciously light. I appreciated how thin the mayo was and wasn’t that typical thick Hellmann’s glob you see on most fried chicken sandwiches. And the toasted brioche was soft, buttery, and the perfect texture for this sandwich. I wasn’t blown away but it felt fresh and homemade, and I greatly appreciated its simplicity. It definitely grew on me later.

Next I tried the spicy chicken sandwich, which was basically the same sandwich, but with a kick. It wasn’t necessarily as hot as a Nashville hot chicken sandwich, but it had a pleasant peppery spice in the back of the throat and didn’t linger much. With the additional spices, I enjoyed this sandwich just a little more than the standard sandwich.

And finally, I tried the biscuit sandwich with two fried chicken tenders, bread and butter pickles, and homemade ranch. The homemade biscuit was golden brown, soft, and buttery. Its smaller size allowed the chicken to really shine through here. The ranch was springy and really popped out with a refreshing tang, perfectly complimenting the sweet pickles. I really enjoyed the chicken sandwiches, but the biscuit sandwich was on another level.

At Bobwhite Counter, it’s obvious that less is more. At too many restaurants do we see an avalanche of condiments, oils, sauces, aiolis, and for the lack of a better word, bullshit. While I wasn’t blown away at first bite, it grew on me. Bobwhite’s simplicity and attention to detail and freshness really makes a difference. I felt like a million bucks after eating these sandwiches, which I normally couldn’t say after eating most others. And now after reflecting on these sandwiches, I need to go back. Excuse me.

about the author: Chris Gennone

Chris Gennone is a musician, writer, and sandwich enthusiast living in Union City. When he's not writing songs for his band CR and The Nones, he's stuffing his face with food on his quest to find the perfect sandwich.