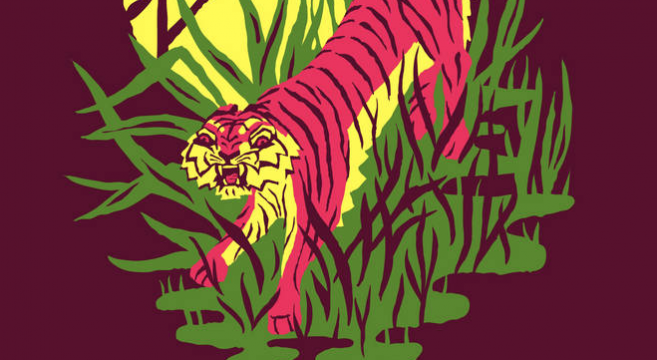 When Ruby Bones released their impressive debut album in 2017 it was filled with raw, visceral songwriting. Dark and angry ruminations on broken relationships and failed dreams were propelled by furious guitars and a ferocious rhythm section. Having known Chris Fox since his party pop days with previous band Boxed Wine, this was quite a different animal. With all that is going on in the world these days it seems like a decade has passed since then. But now there is a little light on the horizon and with that in mind the band decided to inject a little wine into the bones. On their outstanding sophomore album Laser Tooth Tiger, now available for preorder on Bandcamp, the band looks to the future and invites you to the kick-off rager.

Opener “Tired Eyes” explodes from the get-go and lets you know right away that the band is feeling more joyous this time out. It is purposefully anthemic, big and bold and filled with upbeat melodies. Its about “getting up, getting on, getting out” and moving beyond feelings of doubt. “Rooftops” follows and harkens back to Boxed Wine but with a maturity gained though the years. It’s a carefree and nostalgic look back on “how we used to be”, hanging out, watching the sunset with that special someone, sharing longing glances. There are shades of The Hold Steady here with shout along lyrics and nostalgia for simpler times.

Elsewhere on the album the festive mood continues on rockers like “Terrible” which has shades of Don’t Tell a Soul era Replacements and the frenetic “Past Lives” with shades of punk and jangle. The surprising tenderness of “Talk About” slows things down just a bit before triumphant closer “Press Rewind” brings it all home with a fantastic rollicking, Springsteen influenced jam complete with saxophone and organ. Like the best songs of The Boss it perfectly captures the emotional point where reminiscence and anticipation meet.

The more I listen to Laser Tooth Tiger the more I fall in love with it. It’s the perfect record at this point in time. It is filled with a hopeful angst that I can really relate to. That feeling of anxiousness is still there but maybe, just maybe, we can all move forward with a little optimism. It’s the party record you didn’t know you needed but was never more essential.

Fox answers a few questions about the new release.

Why did you decide to make a more upbeat record than the debut this time out?

For the first Ruby Bones record I had a bunch of dark folky songs I’d been sitting on for a few years, ones that didn’t fit past projects. Once we started playing as a band, those songs became loud, punky, and fun so we just ran with it. For Laser Tooth Tiger, way more sunshine crept into the songs and they ended up musically more joyous and ambitious. The lyrics are dark here and there, but we wanted everything to be imbued with a sense of hope. So many songwriters can be dark and broody, but for this record we wanted to do the mostly the opposite. Glad you noticed!

There is quite a bit of nostalgia on the record. Do you consider yourself sentimental?

Every person has universal feelings and experiences they go through as they get older, and looking back fondly on the past is definitely one of them. My memory is notoriously awful, so part of this was an exercise in mentally solidifying an era in my life. Less sentimental, more practical. We pulled a lot of lyrics from the uncertainty of entering adult life, relationships ending and starting, but tried to focus mainly on good times with good friends.

The album contains songs from previously released EPs and singles along with some new material yet it works so well as a full LP. How did you accomplish this?

It was planned! Kind of! Some songs were finished and we’d settled into the idea of what we wanted the record to sound like. The goal was a nostalgic but triumphant and fun record that harkened back to some of our favorite bands and sounds. “Tired Eyes” took the longest, as did our La Bamba/Rosalita coda for “Press Rewind,” but they’d both been started around the same time as quicker-written songs like “Not Enough.” It was a relief taking our time releasing things and doing it in stages, as it let those songs become better over time and allowed us to promote more than just on song from the record. That said, never again. Haha

Laser Tooth Tiger will be released April 30th on Mint 400 Records. The album sounds amazing. Special props to Skylar Ross who handled the mixing and mastering and to additional drum recording by Max Rauch at Domestic Bliss Recording.