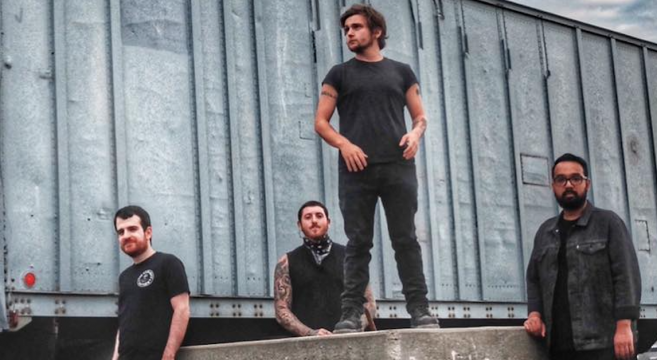 Something About…Bobby Mahoney and the Seventh Son

Not just a” fan” but a man who believed it was the only music that mattered. Suffice it to say I am not proud of the radio presets on the family car or our limited CD collection from that time.

In my defense I was busy. I had two jobs and a baby. If a Motley Crew concert was the night out he wanted to plan, I went. One, twice, eleven times; what’s the difference? I did not attend even one independent show for ten years. I’m not saying that’s why we divorced 22 years later (but I’m also not saying it isn’t.) The point is; it’s always the children who suffer the most.

My son was teaching himself to play guitar around 1998 and quickly developed a logical appreciation for Van Halen and AC/DC. As a family, we frequented shows like that. Eventually I steered them to going without me and I quietly did my own thing when it came to music.

The disservice I did my son was evident recently when I received a text message from him out of the blue saying, “how am I 30 years old and JUST now learning how great Stevie Wonder is?”

In his later teens my son found his own way through a maze of ska, punk and indie music and began to support music of all types. Between us we have seen hundreds of shows but never together and he continued to enjoy the occasional Bon Jovi show with his father. When he began vividly describing a band that opened for them in 2018, I think I surprised him when I said “Hey! I know them!”

I had just become unofficially involved at Telegraph Hill Records in Asbury Park and I knew he was describing Bobby Mahoney and the Seventh Son. My connection failed to impress my son, but BMSS must have as they were the first thing he mentioned about the show after only a 20 minute set. In the words of Chris Jordan at the Asbury Park Press, “They opened the show with a torrent of rock ‘n’ roll sizzle and big stage appeal.”

Son being an Against Me! fan and Mom adoring Gaslight Anthem, we found BMSS connected us by having opened for both those bands as well. Bridging the gaps between indie/alt, rock and punk with their own brand of rock, they offer a sound that rings both new and true to all music lovers and they do it with a sensational stage presence honed over 10 years together. Given 20 minutes in an arena or as a headliner on a smaller stage the hit audiences with, as Jersey Indie says “loud guitars and passionate vocals” and, as Brian Erickson of CoolDad Music adds, “the best choruses in the biz!”

I’m not going to try to tell you about BMSS’ music any better than so many before me have, like LMN&R when they tell you to “Imagine The Clash meets Green Day meets Gaslight Anthem; straight-ahead rock, no bullshit, no gimmicks. The passion in Mahoney’s voice is what really makes the songs kick some ass.”

No, instead of trying to top that (and as if it wasn’t enough to make you want to stream their latest “Roaring Twenties (live)” asap on Spotify) I’ve got a deeper look directly from Bobby Mahoney to motivate you. Here is how he fielded my requisite “fast talk, three questions only.”

Q. What is the story of your band name and its meaning to you?

A. Jon Alba gets credit for coming up with the “Seventh Son” portion. Jon came up with Seventh Son from a line in AC/DC’s “Bad Boy Boogie”: “It was the seventh day, I was the seventh son/ And it scared the hell out of everyone”.

I always looked at it as the rock ‘n’ roll spirit and that mystical energy of a live performance that I could tap into. It pays homage to our musical forefathers who came before us, while embracing the modern twist we put on it. My parents get credit for suggesting the “Bobby Mahoney” portion.

Q. If you could take a time machine back into any decade and be part of that music scene, what decade would you choose?

A. I am happy where we are! Everything has its time and place, and I am making the music I enjoy playing and listening to. The present is insane! Currently, there are more NJ bands than I can name that are absolutely wonderful.

In some respects, I feel like we would have been better suited in almost any other decade of the last 50 years (sad laughter) but at the same time, I think we are making music that is made for right now in 2021. England in the 60s, LA in the 70s/80s, Seattle in the 90s, but the NJ Music scene from the 1920s.

I think each member of the band would answer this differently too. Andrew Saul would want to hang with Motorhead on the Sunset Strip, that’s for sure.

A. I would love to write, collaborate, and/or open for/jam with Brian Fallon someday. He is one of my favorite songwriters, and performers, and the fact that he grew up 15 minutes from where I grew up always gave me inspiration and courage to keep doing what we are doing. It would be cool to work with him in some capacity
at some point. Stranger things have happened! Which reminds me, I am also currently really into Bartees Strange’s music and would love to work with him too.

This tale has a happy ending. Mother and son took in their first local show together in the fall of 2020 and saw Bobby Mahoney and the Seventh Son (and Connor Myers, the Foes of Fern and Jessie McCormick,courtesy of Asbury Sunset Presents.)