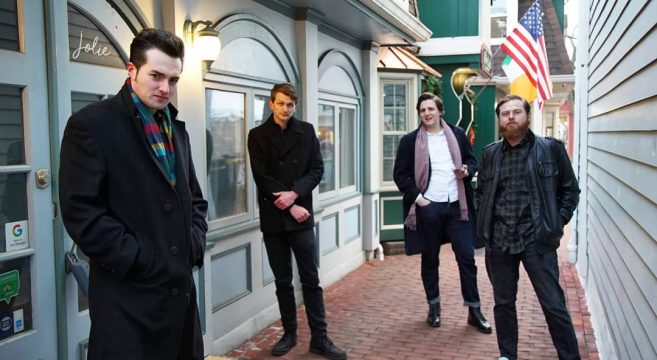 Something About…. the Loudest Band in New Jersey – Connor Bracken and the Mother Leeds Band

If Connor Bracken and the Mother Leeds Band are supposed to be so cool, why am I sweating so much when I meet them for the first time? Because it’s the hottest day of the year in 2020 and everything has gone wrong, that’s why.

Connor and the band have graciously agreed to play my makeshift COVID safe Porchfest-like “Walkabout” outdoor event in Metuchen NJ and a last-minute hitch has moved their venue and start time. It’s late June and 100 degrees with 100% humidity and rain fast approaching. We have hundreds of attendees spread over 17 venues waiting for their first live music experience since being quarantined in March. With mere minutes left before their earlier-than-planned set time I’m anxiously staring down the street watching for them to arrive and wondering how long we have until the skies open.

Arrive they do, just in time and the epitome of COOL. The Asbury Park band pulls up and piles out of a dark SUV directly in front of the performance area at the last possible second. Instruments in hand and dressed to impress in denim and long sleeves, they proceed to instantly make everyone forget the heat and pandemic. I’m feeling pretty damn cool myself, albeit only by association, for bringing this next-level rock and roll show to our sleepy little suburb.

Their performance beats the weather and as I watch it strikes me that their presence is mature beyond their years. CBMLB is firmly in a sweet spot that I recognize from some of the most powerful and enduring bands before them. They’re serving up a combination of classic and edgy verve, delivered as if they have been doing so for decades and still love every minute of it. Clearly, I’m not the only one who feels this magic because of all the 30 acts coordinated that day, CBMLB is the one the audiences inquired about most after it was done.

Critics have dubbed Connor and his band keepers of the “legacy of classic rock and roll.” With this and my story in mind, go ahead and listen to their latest album “Nightbird Motel” and I’m sure you’ll agree. Or maybe you prefer to watch them perform it live on video? Do either/or as soon as possible and be prepared to have Connor Bracken and the Mother Leeds Band wash away any doubts you have about the future of music.

Need to know more before you invest zero dollars in following them on Spotify and hitting the shuffle button? Read on for a Q & A with front man Connor Bracken. He patiently answered three random questions (on behalf of the entire band which includes Chris Dubrow, Rich Seyfart and Jeff Linden) with humor and class. Much like when he agreed to play an experimental Walkabout event in the middle of a pandemic in a town far from his Jersey Shore fan base without any hesitation, he is happy to tell a well- meaning non-musician like myself almost anything she wants to know.

Q. Describe your sound in five words or less.

Q. When your band is hanging out together, who cooks or gets the takeout, who brings the booze, and who is first to take out a guitar and make it about music?

A. I cook the best sloppy joe in Asbury Park. Chris and Rich bring Guinness. If our band had a chance at an alcohol sponsorship, it’d be Guinness because we drink it by the boatload. The guitars have always been and always will be out.

Q. What is the funniest thing a fan or the press ever said to or about you?

A. I wouldn’t want to out anyone’s comment or reviews that we think are silly, but I can confirm those exist. Everything else is classified.

I let him slide on that last one because he’s being a gentleman. (Note to self: try not to write anything that ends up on the classified list.) Upon my own investigation, I cannot find a harsh or misguided comment about the band anywhere. I did find tons of press I agree with and that’s when it clicks; the most rock and roll thing of all about Connor Bracken and the Mother Leeds is that they are who they are. Every song, every interview, all the time—we all get to see them the same way. What you see is what you get and whether you knew it or not it’s exactly what you wanted!

Now do the right thing with the links below and support local indie music by following Connor Bracken and the Mother Leeds on social media and streaming the latest album Nightbird Motel. I took a risk and already bet you would. Once those clicks start coming through, Connor just might succumb to the pressure and share that Sloppy Joe recipe, so “chop chop!” Get to it now please so I can start eating like a rock star.

Also check out the complete “You Don’t Know Jersey” Playlist, which features Connor recorded live and more NJ artists who will be profiled in the coming months.

Copyright, You Don’t Know Jersey, LLC (2010-2022)
Pin It
Previous post:
Food Picture of the Week – The Chapo from Ciao Bagel & Deli
Next Post:
MAUCH Releases New EP ‘Blue Day’ – And You Can Sorta Dance To It!