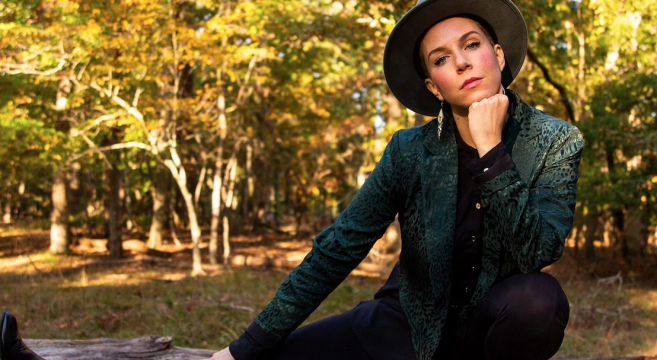 Being an independent artist in New Jersey is not for the faint of heart. Like the YDKJ tagline says, we are “8,721 square miles of attitude” and we aren’t afraid to show it.

Most artists have had the challenge of playing to a near empty room of unappreciative patrons and indifferent management. Enter into that scene Long Branch native Tara Dente, with her mountain heart and skilled fingerpicking guitar style illuminating every song, drop her in the middle of a poorly attended open mic at a bar named after a meatball in North Jersey and you have the “very Jersey” setting of my first real conversation with her in 2018. We didn’t know it at the time, but we were both about to have a healthy dose of that attitude added to our evening.

Now first I suggest you get some context by listening to her new single “Anyone’s Hometown” to get an idea of Tara’s presence. Her eloquent and authentic lyrics are beautifully set in soothing tones. She sings through the complex melodies with the clarity of spoken word, in that one can appreciate every syllable and follow the stories she tells. She is shining example of all the good that is being created in our state.

Meanwhile back to 2018; Tara had been invited to this meatball themed open mic as a “featured performer” and I was there as a new fan. I watched from the bar, where only two others sat, and as she got a meek greeting from a distracted open mic host, she made her way over alone.

Tara was then awkwardly informed that musicians were not given the courtesy of a meal or even a drink for their unpaid services. This kind of thing always makes me cringe and I was grateful there were only three of us at the bar to hear it. I moved closer to introduce myself and made sure to mention I had come here just to see her. I felt it was my duty to make her aware not everyone was in it only for the meatballs.

While the open mic’ers played through their turns I got some of my fan girl questions answered, especially the one that piqued my interest almost as much the suitcase/self-made solo drum kit I’d seen her using at a 2017 show did:

“What’s with all the goats on your Insta feed?” Turns out, she was living and working on a goat farm as part of holistic transitional program for young adults with autism. Whaaaat?! The North Jersey oasistlc.org program stands as yet another positive side to the above mentioned local attitude.

As Tara explained, “I first visited the farm in 2016 while shooting a video of “Ain’t No Time” with The Echo Spectrum in the attic of the farmhouse there built in the late 1700s. I then moved there to help take care of the goats and live on the property and met some of the most wonderful people I’ve ever had the privilege to work with.”

The time flew while we chatted about this and some of her other travels until she was called up to perform. As Tara strummed her first note it was clear she was about to play for us with the same grace she would for an audience of thousands. She transcended the small room and the neglectful host and launched into a feature worthy performance. I was feeling every bit of her skill and soul and just as I as about forget where I was, Jersey came back in the room like a silent tornado.

It came in for the form of a tiny 5-foot zero-inch-tall angry girlfriend stomping through the front door and across the room, headed straight for the gentleman who was the source of her unhappiness. To Ms. Jersey Attitude’s credit, she read the room and did not release the scream written on her face right away. With a hard pinch, she dragged Mr. “Now you’ve’ gone and done it” outside by the arm shoved him in directly in front of the picture window behind Tara’s mic.

To a soundtrack of Tara’s layered and nuanced songs she proceeded to gesture wildly as she read him the riot act. He responded with equal animation and I was as riveted by the volatile pantomime behind her as I was by Tara’s seeming obliviousness to it. Whether she noticed the backdrop or not I’ll never know but the other patrons sure didn’t. I suspect this was not the Mr. & Mrs. first meatball showdown and everyone was quite used to it.

Fast forward to a post pandemic 2021, where Tara has since left the goat farm and is ready to return to live music to continue to support her well-received 2020 full band album The Truth in Mud. She has since replaced the drum suitcase with a mix of standup/electric bass, lead guitar, drums, organ/keys and violin and is about to leave Jersey behind for a few weeks this summer to play the main stage at Floyd Fest in Virginia this this July. She will taker her well-deserved place alongside The Avett Brothers, Sturgill Simpson, Old Crow Medicine Show, Molly Tuttle, and many more.

With so many new opportunities and no shortage of positive press around her, I struggled a little to tell you something post-meatballs that has not already been said. So, in connecting with Tara again this spring I relied on her own words to give you additional insight as to where all those wonderful songs and that graceful presence come from and perhaps a hint of where she is going.

What question are you tired of answering?

I think when someone asks, “what is your songwriting process?” it’s akin to asking someone, “What do
you eat for dinner?”. Some people eat the same things every day of their lives, and that’s fine, and some
people write songs the same way every time, which is also fine. Some people write more formulaically,
and others more freely. I don’t have a norm, so writing looks pretty different every time.

I sometimes wonder if people are ultimately looking for an answer that could help steer them into a more efficient or productive process or demystify the process. I personally like to be mystified by music and the muse. I like that there could be months between writing and try to trust the process – which is to say – that while I’m living life, my mind is subconsciously logging information and experiences, which come out at the right time. This is certainly not practical for everyone, but I like when a song seemingly comes out of nowhere because I trust it more. I trust that the bucket was filled to the top and had to spill out. That being said, on a daily basis, I think having a regimen that involves sharpening my tools is important.

Physical exercise, reading, journaling, getting enough sleep (and having time to dream, where a handful of my songs have come from!), preparing good food, spending time with friends, practicing guitar, doing vocal lessons, going on walks, taking in others’ art, doing nothing — these are all part of the “process”. What comes out of us is a result of what we’re filling ourselves up with. So that’s as important as writing the song itself. Just like making dinner, everyone has their own tools, ingredients, pantries, goals, likes and dislikes. A song is going to be made differently and come out differently for each artist. And if the process and tools were the same for each artist, the product would suffer.

I think songwriting should be quality over quantity, and if that means a couple months goes by between writing a full song, that’s OK. I can sharpen my tools in the meantime, trust the process, and inevitably, something – even if just fragments and ideas – always comes of that.

If you could take a time machine back into any decade and be part of that music scene, what decade
would you choose?

I would love to be on a mountain somewhere (the decade can be flexible) sitting in a circle around a
fire, with banjo players, some mountain dulcimers, a washtub bass, a bunch of people singing, and some
found-objects hand percussion, playing and singing folk songs of literally any tradition or country.

And keep going she shall. As Eric Teel of Jefferson Public Radios says “The Truth in Mud is a giant step
forward and there are many more to come. This is no longer an artist on her way. Tara Dente is already
here. It’s time everyone noticed.”

You can catch Tara when she plays the Unseen Gallery Grand Opening and Sale at Danny Clinch’s Transparent Clinch Gallery going on May 13th through May 17th. She will be appearing on Sunday along with Renee Maskin of Lowlight.