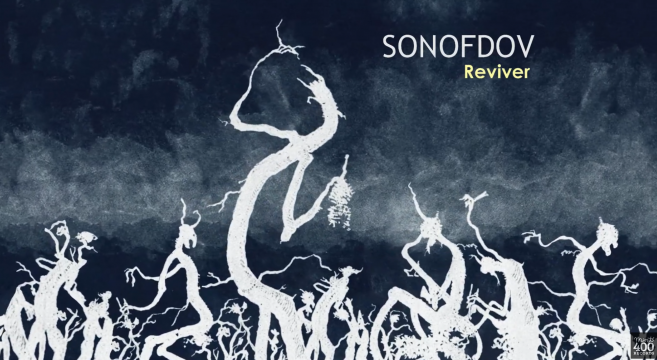 Sonofdov, aka Dennis King, has always been one of my favorite New Jersey songwriters. Over the years he has excelled at creating majestic and hauntingly beautiful songs. Evocative music that explores the struggles of humanity and the eternal, possibly futile, search for the meaning of it all. There is always that elusive glimmer of hope hiding just under the surface of his songs. After such a challenging year there is reason for some sort of catharsis. That is why we are thrilled to premiere his new song/video, “Reviver.”

Like many, King has dealt with many struggles during the pandemic. As a musician he found himself disillusioned with not only artistic challenged but physical ones. “During the past year, many of my friends found solace in songwriting. Not for me, I lost my voice, both physically and metaphorically. Steroids to control my asthma killed my voice, and I had nothing to say, so I put the guitar down.” King continues, “It wasn’t until late winter 2021, I grabbed my bass guitar and started hacking away with no intentions. The fuzzy warmth coming from a hot amp sparked and idea and gradually became the foundation for ‘Reviver.'”

There is a warmth in the exquisite musicianship here. The sparse, poignant guitar, the electronic droning just below the surface, and a bass line that is just perfect.

“The song has clear intentions that reflect a dormant existence. I tried to write a song that moves from one stage to the next, gently reaching the surface with a new disguise. Yes, I’m enamored with the Brood X 17 year cicadas, so I went with the analogy.”

The best of King’s work always dances on the razor’s edge that straddles the line of despair and hope and “Reviver” is no exception. We are all moving to a new stage. Hopefully a more enlightened one.

Dennis told us about how the video came to be: “The motion animation video and single cover, pays homage to 19th century artist/activist Art Young. Acoustic meanderings are not gone, just taking a back seat on this trip. Now, more than ever, we all need to learn how to use our fresh appendages for a better purpose.”

Written, recorded and produced by King, “Reviver” will be available on Mint 400 Records May 14th.