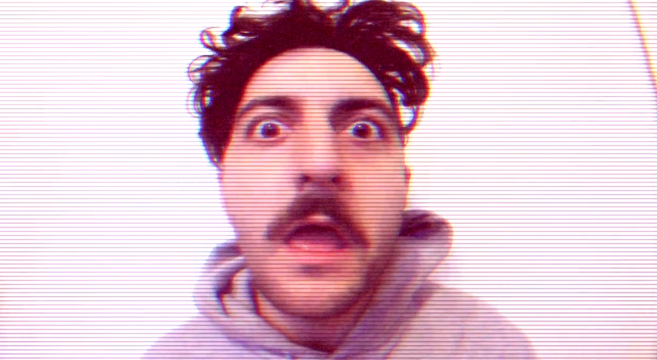 Video Premiere: “Step In, Yer In” From John Cozz

John Cozz is something of a New Jersey treasure. One of the most gifted singer/songwriters right now creating folk-tinged punk with equal parts heart, grit and whimsy, he is also a skateboarder activist, video producer, prankster, NJ food chronicler, illustrator, Cozz Coffee founder and Pizza Bagel Records co-founder. I’m sure I’m forgetting a few things. His life is basically performance art and it is an art I can never get enough of. That he manages to do all these things from the suburbia of Bloomfield is a feat of its own. It’s his coming to terms with that suburbia which brings us the his new video “Step In, Yer In” which we are thrilled to premiere here.

There are many songs on the plights of suburban life. From The Monkees’ “Pleasant Valley Sunday” to Rush’s “Subdivisions” to Blur’s “Parklife” the suburb lifestyle has been a topic for musicians for decades. In “Step In, Yer In” Cozz addresses some of the issues he has run into. Upstairs neighbors who go through both your mail and garbage, landlords who ignore maintenance issues and waking up at 6:00 a.m. to walk the dogs. Despite this Cozz has managed to become content with giving up the party guy lifestyle. “I wouldn’t want to live anywhere I couldn’t walk 5 minutes to get a chicken cutlet. Nor would I want to live somewhere I can’t park my car.”

“I tried to film this video entirely by myself, with the exception of the “landlord” (a friend name Jack Walbridge from the band Alpha Buddha) but it was all filmed using Snorricam, skateboard Dolly rigs, tripods, and body doubles.” The video is also a poignant ode to a four-legged friend. “This video was filmed the week before I had to put Otis down so it was kind of our last hoorah.”

Be sure to check out the entire John Cozz and the Rippers EP Relish on the Good Times at Spotify or Bandcamp.