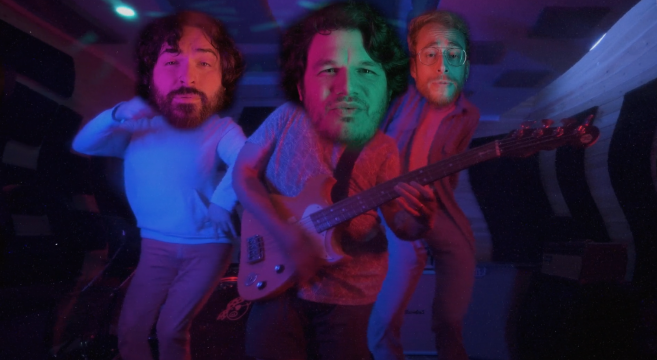 Catching Up With Grasser : Video Premiere of “Who Do I See?”

When we last left Asbury Park band Grasser, we had just premiered their very first video, “Don’t Ever Not Do What You Did” back in November of 2019. It seems like a lifetime ago. There was no pandemic, Tom Brady was a Patriot and marijuana was still illegal in New Jersey. Obviously a lot has happened since then but Grasser has managed to stay creative during the recent difficult times. They quarantined together during a good part of the lockdown in order to put the finishing touches on their upcoming debut full-length album Get Real, Quick! and also took that time to film some videos. And though lots have changed they have not lost their sense of fun. Just check out the video below for “Who Do I See?” premiering today for proof.

The funky, heavy electro bass intro lets you know right away that you have entered party mode. Like many bands who have experimented with new techniques during the past year and a half the band takes its historically indie rock sound and uses that as a jumping point to explore other genres. You can hear hip-hop, disco, pop and electronica. And are those trumpets? Yes! It’s like a musical game of Twister in my ears and I’m digging it. The video matches the eclectic vibe of the song with a pleasant trip of visual delight. A kaleidoscope of day-glo colors, rhythmic dancing and topless shots. “I don’t give shits” is heard throughout the song but it is not a negative message. It is more of the ‘I am not going to let all the crap life throws at me stop me from grinding’ kind of message. And you can dance to it.

Grasser was formed in 2016 by cousins drummer Biff Swenson and multi-instrumentalist Nick Gianatiempo. In 2019, before the recording of their EP Later, Registration, they joined forces with solo artist and long-time friend Dana Yurcisin to complete the current trio. I asked Biff and Dana about working on an album during Covid and what they hope their music conveys.

What was it like finishing your album and filming videos during the pandemic?

Biff: Dana and I moved into Nick’s house the day before lockdown started. We knew “2 weeks” wasn’t a realistic time frame and being locked up individually wouldn’t have been nearly as fruitful. We truly get withdrawal when we aren’t doing something creative, so we hunkered down for almost 2 full months without leaving. We recorded all the vocals, and started 3 of the 4 music videos for the album during that time as well. We obviously got on each other’s nerves a handful of times, but none of us regretted it for a second. It’s also nice to have this period documented in the music videos/lyrics videos.

Dana: It was simultaneously the most fun & most stressful/aggravating time. Fun for the obvious reasons of only hanging out with your best friends for weeks on end and dicking around shooting videos and feeding off each other creatively, and aggravating for a bit of the same reason. We love each other immensely, but we’re also each extremely strong-willed and opinionated, and being quarantined we had nowhere to go cool off and be alone for a moment. Couple that with the stress I already incur when recording vocals and being super hard on myself and you have a recipe for some pent up frustration. That being said, filming could not have been more fun and I wouldn’t trade that time we shared for anything. I’m super proud of what we created in that time.

What is the secret to blending so many genres into your music yet still making it sound harmonious?

Biff: We all listen to vastly different things, so to scratch any one of our itches takes a lot of compromise. In just one song alone, we usually hand off the guitar or bass section by section so that each one of our musical voices are heard. Dana did a lot of back end production that tied each one of the seemingly disparate songs into one cohesive representation of who the three of us are – or always wanted to be. This is definitely the boldest artistic statement any of us has ever made before.

Dana: The way my music-making brain works is I’m always taking bits and pieces from all the different artists/styles I love and piecing it together. It’s how I’ve always written songs. So Grasser just kinda felt like a natural extension of my usual way of working, just pushed a bit further to the extreme. Instead of having to write everything myself, I had two very talented guys with tons of creative ideas throwing ingredients into the pot. To me, you can mash literally any genres or sounds together you want as long as you sell it with transitions and execution. So this was a great record to test my limits as a producer/mixer.

What do you hope people take away from your music?

Biff: Having mostly always been looked at as just a drummer of dozens of local bands, this LP is my musical mission statement. I wrote all the lyrics, so it’s extremely personal to me! I want people to realize the scope in which we think as a group. It’s not 4 chord songs with super relatable lyrics – it’s all over the place, just like we are. It’s an ADHD album of free association and unwarranted musical landscapes. The album uses every production trick I’ve ever wanted in one album. It’s also my first ever full length album! I’ve only done EPs in every band I’ve been in since high school, so it feels like the proper first full length outing for me. I hope people take away that we aren’t fucking around anymore. We’re on one and we aren’t coming back down.

Dana: My sincerest hope is that people take the time to listen to this album in headphones so that they might notice and appreciate all the care that went into every little detail of it. There’s not a second in the 44 minute runtime that wasn’t crafted with purpose and intent. As fun and extravagant and give-no-fucks a lot of it is on the surface, behind the scenes we treat every single song like it’s our last, and I hope it’s audible to listeners just how much we truly give a shit about our art (sorry, “Who Do I See?” chorus).

Any plans to do some shows once the album is out?

Biff: We have been slowly piecing together a live band that can pull off the obnoxious amount of layers we’ve created, but nothing is booked just yet. Each one of us have at least 2 other full length albums we are currently working on congruently with this album cycle. Our vinyl comes out this winter – so we will have something together by then for a proper release party.

Dana: Performing live, especially without holding an instrument, is as scary as skydiving to me, and then we went ahead and made a record that sounds like 400 people are playing at once, so we’ve really stacked the cards against ourselves as far as pulling off a live version. Having my best friends on stage with me kind of gives me superpowers though, and we had a lot of fun at the two shows we did play before the pandemic hit, so getting the right crew together and hitting the stage with the new material is definitely a goal of ours! Gonna have to buy some more equipment first…

The track will be on their upcoming debut LP, Get Real, Quick!, out September 24th via Byrdhouse Records. To secure a pre-order of the limited edition vinyl, click the here.