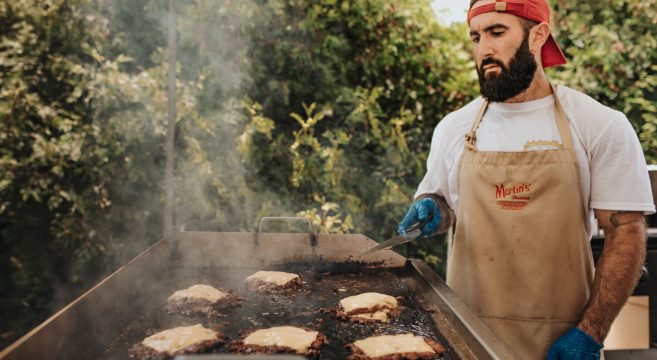 Interviews with the Innovators: Nick Lepore of Burger Buff

Toms River native Nick Lepore was a man on a mission. In December of 2018 he embarked on a culinary plan that could either be called crazy or ingenious. It was probably a little of both. He was going to eat one burger everyday for 365 days in a row. He did it as a way to not only learn what makes the perfect burger but also to better understand the intricate relationship between food, photography and social media. During his time as a bodybuilder, he competed internationally for 10 years, and he had sampled burgers all over the world. You could say he was destined to create his own burger brand.

If you are a fan of burgers you’ve probably heard of Burger Buff. And if you haven’t, you soon will. His burger pop-ups sell out in a matter of minutes, if not seconds. He is in demand for private parties and is invited to judge burger contests. The followers on his ever-growing Instagram account continually look to him for burger advice. The reason? His simple, but not simplistic, smashed burger is incredibly delicious. The two Pat LeFrieda patties are perfectly smashed to ensure crispy edges and a juicy center. He places a piece of yellow American cheese on top of them, places the burgers on a Martin’s potato roll and adds his special Burger Buff sauce. That’s it. He calls his burger part high-end steakhouse burger and part old-school burger joint.

One of the biggest characteristics I admire about Lepore is his honesty and dedication to craft. As with his bodybuilding he is not afraid of putting in the hard work necessary for success. He is one of the most genuine people I have met in my many years working in the food industry. To some, his skyrocketing popularity can seem like an overnight success but nothing could be further from the truth. He has studied, honed, and experimented for years to arrive at the point he is at now. I also admire his promotion of other worthy businesses. His Instagram feed is filled with recommendations for burger joints, pizzerias, bakerie, and coffee shops. Like us here at YDKJ, he does not promote anything that he does truly believe in. That builds trust with your audience.

His hard work and great burger is starting to get him some big fans. George Motz, one of the most respected burger experts in the US–as well as an Emmy award winning filmmaker, author, and photographer–reached out to Lepore to co-host a burger pop-up together at Kuppi Coffee Company in Edgewater this past May. I asked Motz what he sees in Lepore. “Nick is awesome. What he’s doing is very important because he’s keeping it simple, which is very difficult to do. His burger is made one way because that’s all you need. My ethos is similar and we have crossover fans.” We were lucky enough to attend this event and to see these two burger virtuosi working together was amazing. Motz added “Doing a pop-up with him just made sense and the fans were very happy!”

We can personally attest to that. We attended the Kuppi Coffee event and sampled the wares.

We asked Lepore a few questions to get to know him a little better.

How did burgers become your food passion?

It started during my days of bodybuilding. My “cheat meal’ was always a burger and fries. At the time, I was traveling a lot while competing and working for a supplement company. So I would always try to find the best burger wherever I was. Whether I was in California, China, Dubai, Germany…I could always find a burger.

How did growing up in Toms River influence you?

Basketball and sports were a big part of my youth. We lived close to the beach, and I did not know at the time, but working at pizza spots and with seasonal crowds….you learn a lot about consumer behavior. Toms River has a lot of chain restaurants unfortunately, so as I got older I began to realize I had to venture out to find some great food spots.

Why is smashing the burger so important?

From what I’ve read, smashing burgers has been around for a very long time. It is simply one style of burger among many. I prefer the smash, because it allows you to get a nice even hard sear on the outside and creates a super flavorful crust. If done right, you can still maintain a juicy center. I also just prefer two 3 oz thin patties , it adds layers of texture to the burger. Don’t get me wrong, I also occasionally crave a thick classic steak house burger as well.

What factors go into deciding who you collaborate with when selecting a pop-up location?

I started the pop-ups as a way to bring people out to some of my favorite spots. To use my following to collab with businesses, I could meet the demand of people asking to try my burger, while also showing them a new coffee shop, pizza spot, etc. I’m not in the business of trying to sell as many burgers as possible, or I would just accept every invite to pop-up everywhere. I want to partner with spots I love myself, put out a great product, and have good passionate people behind their brand/restaurant. That way I can confidently promote whatever they have as well. 9 times out of 10, the people attending will buy something from the host location, or return again because I introduced them to one of my favorite spots. At this point I have hundreds of inquiries to pop-up places, so it’s a lot to decipher what makes sense and what doesn’t. I need to visit the spot, meet the owners, try the food, and see if we align on all levels.

You sometimes judge burger competitions. What do you look for in a burger when it is not your own?

I’m pretty simplistic in what I prefer, but I also know that’s just one man’s opinion. You can definitely get creative and not over-do it in terms of toppings. I first look that the basics are executed correctly. Meat, cheese, Bun. Good flavorful meat(properly seasoned), cheese melted, fresh bun. If you can’t execute on those, you shouldn’t worry about crazy toppings. From there, some creativity with a nice sauce or one or two toppings is really all you need for a great burger in my opinion.

What is one topping no one should ever put on a burger?

I don’t speak in absolutes, and I’m all about people eating burgers however they want. For me personally, I don’t get the whole mac ‘n cheese on burgers, and also think the fried egg is way overplayed.

What is the oddest burger related question you’ve gotten on your Instagram AMA stories?

Usually something related to an odd private party request…there’s some interested people out there. I’ll leave it at that.

What is your workout routine these days to acquire the buff?

I try to train at least 5 days a week. I was never big into cardio, so basic bodybuilding weigh training. Hard, heavy, intense, about 60 minutes max.

What is your favorite non-burger meal?

I always crave a nice Italian sandwich, chips, and a soda. Also, Sunday Sauce and pasta.

Putting you on the spot…favorite NJ burger spot?

Currently, The Grand Tavern in Neptune.