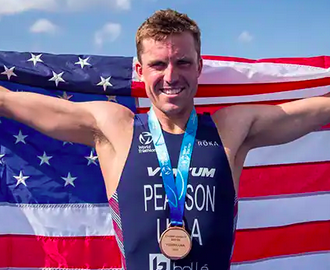 Morgan Pearson competes in the triathalon which will be held on Monday, July 26th.

He was born in New Vernon and attended high school at the Delbarton School in Morristown.

From the Team USA site:

Pearson, 27, is originally from Spring Lake, New Jersey, where he grew up as a competitive swimmer, ocean lifeguard and promising high school runner. He went on to run cross-country and track & field at the University of Colorado at Boulder, where he was a seven-time All-American. He got his start in elite triathlon through USA Triathlon’s Collegiate Recruitment Program, which identifies top NCAA swimmers and runners who have the potential to excel as triathletes. After winning the overall title at the USA Triathlon Age Group Sprint National Championships in 2017, he debuted as an elite triathlete in 2018. He is experiencing a breakout 2021 season, winning bronze in Yokohama on May 15 and silver in Leeds, England, on June 6, to become the first U.S. male ever to earn multiple World Triathlon Championship Series medals. His older brother, Andrew, passed away in March of 2021, and after qualifying for the U.S. Olympic Team in Yokohama, Pearson said, “He gave me the boost I needed today, and I was just thinking about him. Hopefully when I’m at the Olympics, he’ll be there with me.” Pearson currently trains in Boulder and is coached by Dean Golich.