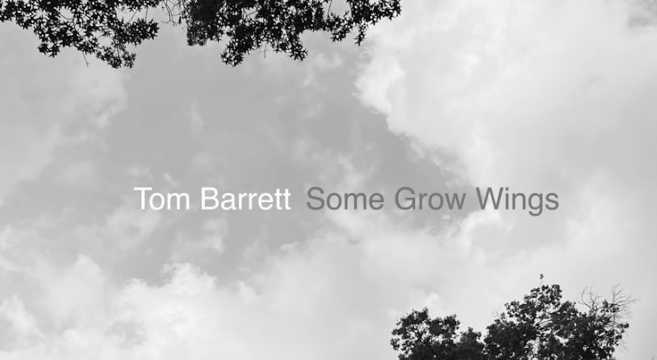 When Tom Barrett led indie rock/showgaze Jersey City band Overlake, his vocals were often battling to rise above a tidal wave of dreamy, fuzz laden guitar accompanied by heavy bass and thundering drums. This of course was the idea drawing from influences My Bloody Valentine and Dinosaur Jr. His post-Overlake band Wave followed a similar blueprint but barely began to hit their stride before the pandemic hit. During the previous year and half circumstances let Barrett explore some quieter options. His wonderful new song “Some Grow Wings” finds the singer/songwriter shining a brighter light on his vocals and we are thrilled to premiere it today.

As he grows older, Barrett says he feels more confident with putting his voice out in front of the music. Last year’s release, 051480, was a low-fi affair recorded on his iPhone. It contained some great tunes and showed off that voice that we weren’t used to hearing so out front. During a dark time, the album was something that was meaningful to not only himself but to many of his listeners. The album also raised funds for the NJ Pandemic Relief Fund. He took these intimate songs on the road for a few outdoor, socially distanced porch shows, including one right outside my house for YDKJ’s ten year anniversary.

“Some Grow Wings” is a gorgeous tune with subtle acoustic guitar and steady percussion. Barrett’s lyrics delivered in his familiar low register, almost-whisper, sounds tailor-made for this music. The song will appear on a forthcoming album that is about 70% written and 30% recorded. “Everything that’s been recorded so far I’ve done myself, but there is a possibility of me working with some other people to get it finished. I can’t quite say what the overall sound of the record is going to be like. It’s less layered than anything Overlake has done, and definitely more hi-fi than my last record, 051480,” Barrett says. “I’m just really excited for it and can’t wait to share it with everyone once it’s finished.”

While there is that possibility of Barrett working with other musicians to finish the record he also has put a band together called Tom Barrett & the Cuts with bassist Jamie Zillitto formally of The Everymen and drummer Gregg Leto of Life Eaters. They hope to play live soon though no dates are set. He is also playing drums for the solo project of Nicole Yun, frontwoman for the Roanoke VA band Eternal Summers, and recording and playing some shows with her this fall. As if that is not enough he also has a drumming gig with Chris Gennone in CR & the Nones. Needless to say Tom Barrett is a very busy and in-demand person these days.

Barrett recently signed to New Jersey based record label Mint 400 Records. He likes the fact that owner Neil Sabatino really supports singer-songwriters and strives to make them a priority. Asbury Park band Lowlight signed to the label in June and Barrett’s respect of guitarist/lead singer Renee Maskin played a role in him deciding to submit his solo work to Sabatino. They played an acoustic show together earlier this month at Farside Tavern in Hoboken and he hopes to do more dates with Maskin in the future.

I asked Sabatino what Barrett brings to Mint 400. “Tom Barrett has been an integral part of the NJ music scene for a very long time. I had the pleasure of playing with him in a side project I did called Shallows, he met with me and was part of the signing process when I signed Pioneer The Eel, and I had booked Overlake a few times over the years and Tom as a solo artist on The North Jersey Indie Fest year two.” He added, “Tom is a great songwriter and artist and I’m so happy he chose to work with us for his upcoming solo work. I know many of our NJ artists are excited to have such a major talent join our roster.”

Barrett will be playing a show in one of his favorite cities, Seattle, next week but has some local shows coming up as well. You can catch him on 8/8 at Good Times Trading Post in East Rutherford and on 8/26 at Pet Shop in Jersey City.

“Some Grow Wings” will be available on all streaming platforms on July 23rd.