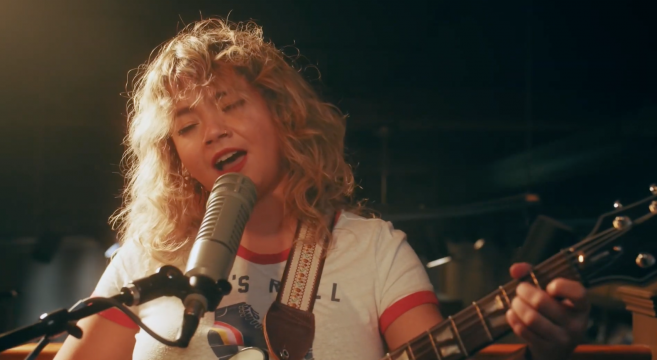 When Pamela Flores left Asbury Park, I wonder if she knew she could never visit New Jersey again?

Pam has been lighting up the west coast from Arizona to Los Angeles to Hawaii for the last two years but coming through here for any length of time will always be more than “a visit”. She is a thread in the fabric of the Jersey shore music scene that cannot be pulled away no matter how much distance or time passes between stops. Jersey is where the music was meant to be made.

Despite having a round trip ticket back to Hawaii she made herself at home while visiting the record store, coffee, book and thrift shop combo known as Chamber 43 in New Brunswick last spring. Pam reunited with her band, Dan Haase, Steve Honoshowsky, Chris Colon and Ryan Gregg for a “Lampshade Session” and in collaboration with Kris Khunachak and Connor Hanson they shot a video for the song “Next Time.”

She may have taken the long way around the country only to return to New Jersey and film a video in one take, but as she says “I am thrilled to be releasing this video in the most Jersey way possible via You Don’t Know Jersey. Hope ya’ dig it.” Hell yeah, I dug it! Before I tell you any more about it (and like her T shirt says) let’s roll that footage for you right here and right now. Go ahead, I’ll wait….

So, now perhaps you see what I mean? Touching base in her home state may have been just what Pam needed to find her niche on the west coast. At her current address in Hawaii she’s now working with two-time “best reggae album” Grammy nominated producer Leslie Ludiazo and has Hawaii based musician and P. Mauriat endorsed Reggie Padilla playing sax on the studio version of this song.

There’s a lesson in here somewhere about the old “if you love something set it free…” adage and as happy as I am that Pam proved it out by coming back to us, I am equally happy she is back out there picking up some of the national recognition she deserves. Having served as social media ambassador for the New Jersey Coalition Against Sexual Assault and being featured in Marie Claire magazine it’s clear that she can command a room with both immense musical talent and personality. Like so many of our home-grown greats, Pamela Flores is bigger than our state borders can hold.

That’s kind of ironic given her small stature. The first time I met Pam was a house show in Metuchen, shortly before she left for California. She arrived (with her parents! <3) and performed her latest single “Grace” wherein her heart wrenching lyrics and soaring vocals led me to believe she’d be at least 7 feet tall. She is not, as you can see in the raw footage of that day here.

HEY that reminds me…she also can’t escape my usual Q and A session. I will not be distracted by any video premiere because, as always, I make the artists do all the heavy lifting and deep thinking on these posts themselves.

Q. What is the starkest difference or similarity in the music scenes from Asbury Park to Hawaii?

A. Hawaii‘s scene surprisingly reminds a lot of Jersey. There is some fierce talent out here and everyone has been incredibly welcoming. It’s definitely a family “Ohana” vibe out here and I feel very lucky to experience it as an outsider.

Q. What’s the funniest or most outrageous thing a fan or the press ever said to or about you?

A. Once an older man came up to me after a show and “suggested” to me that I should smile more. Sure enough, I gave him an “F** Y**” smile after that.

Q. What’s your dream collaboration like, or with whom?

A. Brittany Howard. Absolutely 100% would be a dream to collaborate with her. She is a force vocally, musically and I am so inspired by her work.

Now you know one of Jersey’s most appealing qualities: you CAN go home again. Get to know Pamela Flores and support local music by following her journey via Instagram @PammiFlo and stream the music taking her across the country here.