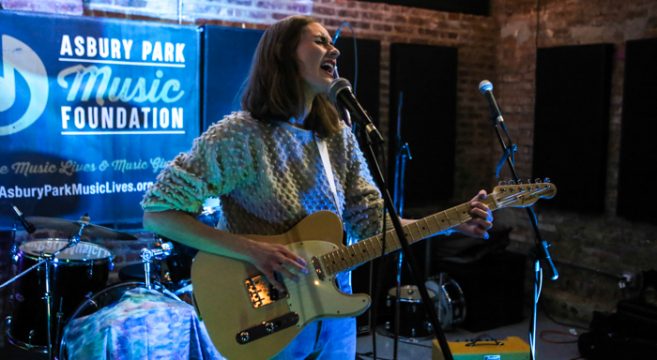 I have always been fascinated by what musicians listen to when they aren’t creating their own music. What music inspires them, what albums do they return to again and again—their “desert island” discs. With this in mind I have asked some of my favorite New Jersey musicians to name their top 10 favorite albums of all time. Not the albums that they think are “important,” or that have influenced many other artists or ones of technical merit. I wanted to know their very favorite albums that they love just because the records mean the most to them.

I first learned of Jenna Murphy from her work in indie/folk/pop band prim. I was so impressed by the exquisite musicianship and emotionally honest lyrics that we premiered their first single “Spilt Milk” back in January of 2017. prim’s debut EP Awake Again was released shortly thereafter to unanimous praise. A big part of that success was Murphy’s incredible vocal delivery. At times ethereal and haunting, other times raw and poignant, her voice conveys a powerful heart yearning to connect. It was no surprise a few months later when her acoustic performance at the Porchistas Home Studio in Montclair left everyone in attendance speechless.

In early 2019 Murphy, along with friends and musicians Erik Kase Romero and Matteo DeBenedetti, formed stillhungry. Born from a songwriting experiment, the Asbury Park trio’s chemistry was so dynamic that the songs that came out of it were too good not to pursue. We are the benefit of this union. Their 2019 debut self-titled album displayed not only gorgeous musicianship but highlighted how cohesively they blend their ideas together. They clearly bring out the best in each other. This February they released their second LP, also self-titled, adding a new level of maturity to the music.

I asked Romero about working with Murphy. “I met Jenna 4-5 years ago when we worked together on her EP for PRIM.  I was immediately struck by her sense of melody, magnetic vocal presentation, and most importantly her ability to communicate such visceral and raw emotion through her performance. When Jenna, Matteo and I started stillhungry it felt like I had lucked out and ended up on an all-star team with my 2 favorite songwriters/singers/musicians!  Playing and writing together has been a really incredible experience and has challenged me to be better in every way.” He continued, “On a side note, Jenna has quickly become one of my dearest friends and has been there for me through the darkest times of this past year and a half. I love her dearly.”

stillhungry will be playing the House of Independents in Asbury Park with Sonic Blume and Heather Hills on September 2nd.

It was honestly *the most* difficult thing for me to pick an ABBA album; they’re my very favorite and each song is such a hit, truly. The band was really formative for me, all throughout my life, and this record continues to inspire the way I approach my own music. Much of their influence can be seen through my building harmonies, layering, all that fun stuff. Something a lot of people don’t realize, too, is how truly sad their songs are. Surface-level, it seems like superficial, dancey disco– but if you really dive in, there is depth and a lot of sorrow there. Plus, name a better song than “Fernando”– honestly! I’ll wait! (And google the background on that song, it’s interesting– English vs. Swedish versions!)

This one still leaves me speechless to this day, each and every listen! I had a really really (really!) difficult time choosing between Rabbit Fur Coat and The Voyager…but let’s settle of RFC, because you know I can go on and ON. Jenny is pure magic and her art has had a huge impact on me since her Rilo Kiley days. Rabbit Fur Coat has such an energy, the way every instrument sounds, the Watson Twins, each word she sings and the meaning behind it all— I feel utterly connected to and in-tune with it all, it’s like she read my mind while writing the album. I wish I could listen to this record for the first time ever again. Great great road-trip record, too!

Ohhhh, I mean, Annie is just a force. This record specifically takes me to high and low places, and the energy shifts are so cool.

To say Beyoncé changed my life is an understatement. From a very young age, she was a guiding light for me. And, although ALL of her records are perfection, 4 is very special and powerful. I mean…have you heard the run in the beginning of “Countdown”? (Bonus little tip: check out the a capella version of “I Care” on YouTube, at ~30 seconds in. Goosebumps, every time.)

This record gets me, every time. I think it might be my favorite record ever.

Does this one need an explanation? I think not!

One of the most poignant and peaceful and painful performances I’ve ever heard. Nina Simone has really influenced my own vocal delivery, how I share my feelings and experiences– everything she does is pure poetry and I can only hope to be half the storyteller she was. I always feel pretty out-of-body and really inspired while listening to this collection of songs. As a Queer person, her songs and sheer existence remind me of the importance of fighting for who you are and your rights.

Yes, Annie again!! I gushed all about her above, but this record is tops, too. From “Actor Out of Work” to “The Party” and “Save Me from What I Want”, it really hits the spot and gives the listener EVERYTHING they could possibly want to hear. I can play it over and over and over and each song grows on me more and more.

Honestly, just a lovely record from start to finish. It has a softness and this orchestral feel (we love a good clarinet solo) to it that lifts me up, swirls me around throughout the entire emotional record-long story he narrates, and gently places me down at the end– leaving me dying to listen to it all over again, right away. That’s the true marker of a good record, to me: if you get to the last seconds and wish it wouldn’t end/want to start it from the beginning again.

David Berman is an artist I got into a bit before the pandemic; right before the last tour we (stillhungry) left for, a few days before COVID hit the US. And so, I think there’s part of me that felt really seen during the really dark last year by way of these songs. The way David Berman wrote really touches my soul; I connected especially with this record, I related to the things he was thinking, in my own way, I suppose. Everyone I’ve spoken to about him as an artist is either a BIG fan or not into it at all, which is wild to me. Maybe it’s an acquired taste, but I felt it all the first time I listened. It’s become a really important record to me, I’ll undeniably be incorporating what I’ve learned from him into my future writing, for sure.

Runner-Up: Now That’s What I Call Music Vol. 8 — Now THIS one truly doesn’t need an explanation!