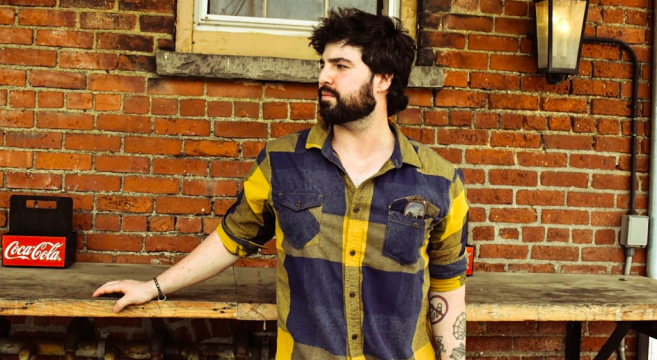 If you’re familiar with Chris Fox, chances are you know him as the super-friendly, approachable, and energetic lead singer and guitarist of bands Boxed Wine and Ruby Bones. The songs from these bands are filled with pop laden indie rock that almost demands you dance to. Ruby Bones released the excellent Laser Tooth Tiger back in April and it is a party album of the highest caliber. With songs like “Rooftops” and “Drink All Night” it was the perfect record heading into this summer. Therefore it was quite a surprise when Fox told me a while back that he was working on something quieter for autumn as a solo project. Turns out there was no need for concern. He has made a record both wonderful and warm–perfect for cooler afternoons as the leaves begin to change. As Chris Fox & the Beasts he will release Rain Days on September 17th but we are thrilled to premiere the album today.

The songs were actually written a decade ago and Fox was able to revisit them with the hindsight those ensuing years have allowed. Looking back always allows for a bit of melancholy but the songs on Rain Days are not overtly sad. Opener “Summer Song” is an upbeat tune that highlights Fox’s skills on the acoustic guitar. “Twilight” and “Sweet September” have lilting melodies that are sweet without being twee. His duet with Cat London on “My Head on the Ground” is a standout track. Their voices compliment each other perfectly.

Fox gathered some impressive talent to help realize his vision for the songs. A veritable who’s who of area musicians. Take “Place for a Ghost:” a folk song with touches of country the song that benefits from the upright bass of Chris Dubrow of Little Hag and the Mother Leeds Band and the lap steel guitar of James Abbott of Rosey Bengal and CR and the Nones. Elsewhere on the album Albert Chua of Quality Living lends guitar and clarinet, Sean Ricky Nelson adds piano and Andrew Merclean contributes on Mellotron. Everyone involved helps craft a rich sonic tapestry.

The album sounds great and that is no surprise. It was produced, mixed, and mastered by the esteemed Max Rauch at Domestic Bliss Recording. He also plays drums on several tracks.

Fox has crafted an album of quiet beauty where each instrument, including his voice, stands out within the sparse soundscape. Not a note is extraneous. Despite the title, Rain Days will bring a little sunshine in your life.

He answered some questions about the release below.

How did you approach the songwriting for this project differently than with Ruby Bones?

Honestly, all the songs come from the same place, but the ones on Rain Days had the benefit of existing for years before being recorded. They were some of my first attempts at fingerpicking—a very non-Bones trait—as well as making overtly folk-leaning music. Revisiting them as a far more seasoned musician helped imbue everything with feelings a younger me wouldn’t have been able to.

Removing that mysticism, at this point it’s basically “faster songs go to Ruby Bones and slower songs I don’t look like a fool performing by myself can exist in the realm of the Beasts.”

Did the time during COVID play a part in wanting to take this direction?

It certainly gave me the time to do it, and was a great way to flex the music muscles when not panicking about masters for the recently released Ruby Bones record. Plus, doing songs where it’s mostly one guy is easy when you’re the one guy, mostly.

Have you always been a fan of folk music?

Yes, completely. Maybe it’s a surprise to people who’ve enjoyed other bands of mine, but I went from being a manic ska kid to a total freak-folk and indie rock guy in college. I became a huge Devendra Banhart and Mason Jennings fan around 2006, right alongside bands like The Strokes and Spoon.

In years since I’ve gotten very much into Magnolia Electric Co. and newer bands like Big Thief and Trace Mountains. My wife might hate the amount of Bob Dylan that comes out of our stereo, but I think he’s grown on our dog Bacon. Similar growls. Plus, she plays Waxahatchee on loop while saying she doesn’t like folky stuff, so I call codswallop.

You work with a number of talented musicians on the album. What was the collaborative process like?

I had the majority of the songs recorded and pretty much asked everyone to slap their talent on top of it. Max Rauch recorded a shuffle beat for the first time, Chris Dubrow lugged a gigantic double bass into my tight bedroom, Cat London World Wide Webbed me her vocals from the middle of the state, and I literally met James Abbott for the first time right before he recorded.

I even asked Albert Chua from Quality Living to play guitar and he sent me clarinet, so you sometimes get surprises you didn’t know you needed. That guitar also eventually found its way onto ‘On the Move,’ accidentally making the track extra gorgeous. These are the joys of sending people songs with zero expectations while trusting their talent. Heck, I didn’t even know my buddy Sean Ricky Nelson could play piano, I only knew he owned one!

Are we seeing a softer side of Chris Fox?

Over the last few years I’ve noticed all my sides getting softer, but musically I’ve been getting more relaxed as time ticks on. I adore rock and roll, but I’ve also made a lot of it. Doing something prettier has been ever so enjoyable, and I do hope to bring some of that atmosphere to the next big rock record I’m a part of.

What do you hope listeners take away from Rain Days?

As the title very lightly suggests, I just wanted to make a little record for rainy days that felt like some of my favorite rainy day records—I’ll list those below—so if anybody gets a similar feeling from this one then I’ll be one happy guy.

Chris’s Other Rainy Day Records:
Little Joy – Little Joy
Belle and Sebastien – If You’re Feeling Sinister
Julie Doiron – I Can Wonder What You Did With Your Day
Beirut – No No No