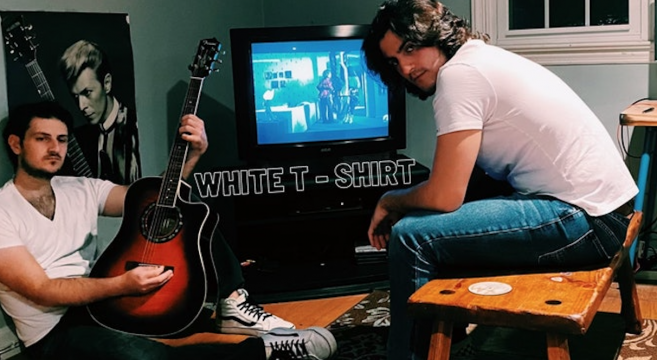 Put on Your Records: the dt’s Premiere “White T-Shirt”

From 2014 – 2019, The Vaughns were one of the most ascendant bands in New Jersey. But after the release of their full-length FOMO that summer, creative fissures grew, and while The Vaughns remain a touring, recording band, founding members Tom Losito and Dave Cacciatore picked up and moved on.

The duo spent the end of 2019 and early 2020 playing as ‘Dave & Tom,’ mostly focusing on bar gigs and cover tunes, and finding their footing after leaving The Vaughns. These weren’t lead singers. These weren’t frontmen. They were just two childhood friends figuring out how to do one of the hardest things sidemen can do after leaving a band: start over.

But they looked to the classic power pop music they grew up listening to in order to help form their new sound. Then they rebranded as the dt’s and released their debut single, “You With Me” back in June. After a successful single release at House of Independents and a blistering set at Asbury Lanes’ Sea.Hear.Now kickoff, the dt’s have unleashed “White T-Shirt” onto the world.

Pardon me if this writer mistook the song for a lost Posies gem from the mid-90s, because “White T-Shirt” hits all the beats of the last great power pop era: crunchy guitars, an infectious chorus, and harmonies so tight you couldn’t slip a piece of paper between them!

While the dt’s recorded the bulk of the song at their home studio in Springfield, NJ, they did get a little help from their friends, coaxing powerhouse drummer Frank Lettieri Jr (formerly of The Paper Jets) out of retirement and having Telegraph Hill’s own Joe Pomarico tie the whole thing together as mixing engineer. What we end up with is an engaging, intoxicating slice of rock and roll from one of the most promising new groups in New Jersey!