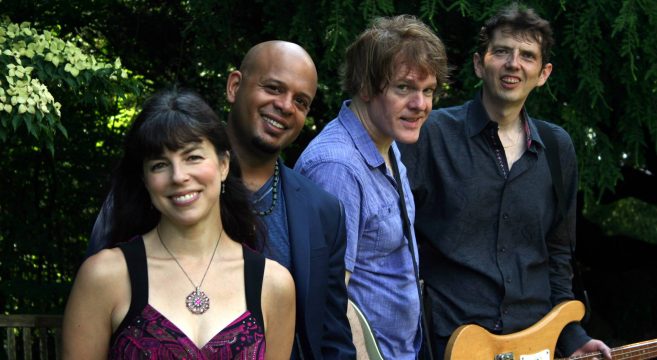 Something About the Happiest Band in New Jersey…the Wag!

What can I say about the Wag that has not already been said? And how could I say it better than this guy?

“If the Beatles and the Cowsills got it on backstage at Ed Sullivan, The Wag would totally be their love child.” -Wil Wheaton (Actor, Author).

The Wag has been making music for over 20 years now and that quote remains a very accurate description of the foursome’s sound. I have only come to know them in the last five years, right around the time my good friend Joshua Van Ness joined the fold as their drummer. And right around the time I suffered a huge personal loss.

When Joshua invited me out to show to the show that evening in 2016, I was not much in the mood for happiness. Being a good friend, he insisted I get out of the house despite my wish to brood a little longer. It was there, at my very first Wag show, that I learned something important about this band and something you may not know; they are the happiest band you will ever see or hear. On stage and off, they are the genuine embodiment of the upbeat melodies and magical harmonies that dominate their original music. For the first time in weeks, I got lost in something other than my troubles that night.

That is what happens when four experienced, talented, and genuinely kind and happy people choose to combine forces. The audience can hear it and it is contagious. Driven more by their love of music and people and each other than a desire for success, they have in fact found the well-deserved recognition some equally talented bands fruitlessly chase for a lifetime.

Their unique style of rotating lead vocal and enthusiastic performances sell out at places like the Stone Pony on the regular and they are in demand all over the country for all kinds of special events like Beatles and Rocky Horror tributes. They light up seasonal events where they perform classic and original Christmas tunes. The Wag was also the first band to sign on to my own Walkabout event in 2020, which was in early June and the depths of the pandemic. They embraced the as-yet untried socially distant porch fest inspired platform without hesitation and made their portion a successful fundraiser for Monmouth County SPCA. They have come through for the community countless times to lend their talent and leverage their loyal fan base for worthy causes related to local mental health facilities, historical societies, and general goodwill.

As I write this, they are on their way home from a four-day gig at Abbey Road on the River in Indiana. While they were on the road Hurricane Ida hit NJ hard. They immediately checked in on me and all their friends. This was no small feat because their social circle includes a large percentage of everyone who has ever seen them perform. The Wag is the kind of band you really want to meet after the show, and they don’t take these gestures lightly. I came to call them friends instantly and have watched that experience repeat for others countless times.

I was not surprised at all when they called from the road and asked about converting their very next local show at the Coffee House in Edison NJ on September 10 into a fundraiser for whoever may be in need after the storm. Animal causes are close to this 50% vegan band and so we reached out to the nearest shelters first. Those inquiries resulted in the recommendation to help the hardest hit around here, Plainfield Area Humane Society.

The Coffee House in Edison offers a flexible, pet and kid friendly indoor-outdoor space that will be a perfect place to blow this effort up. There’s room for an above average crowd and for the PAHS members to host a donation table (the show is free) and bring along a few adoptable pets. Prior to the storm, PAHS had been fundraising to relocate as their current building needs so much repair and is entirely too small for the five towns they serve. Now this relocation is more urgent than ever.

I expect that as soon as they get home from Indiana, the Wag will start to do the thing they do best and bring tons of people together for this cause. Using huge hearts and big smiles they will be working to make this as much of a success it can be. They will spread the word and deliver a night to remember. Their old friends and fans will not miss it and if you need a night out, or want to help, or just like making new friends please do join them on September 10!