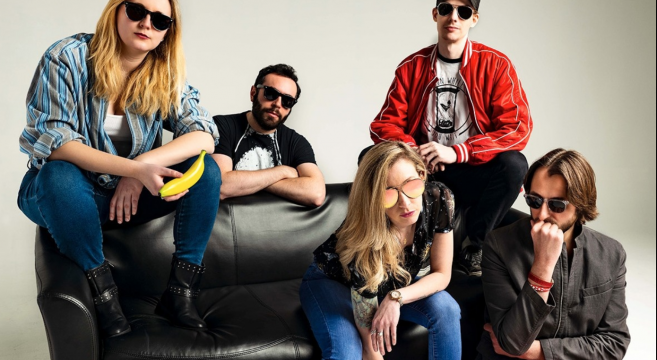 Premiere: The Extensions Cover “Don’t You (Forget About Me)” From Upcoming Mint 400 Compilation ‘At the Movies II’

You all know the story. Five individuals from different backgrounds find themselves brought together by circumstances both in and out of their control. While first eyeing each other suspiciously due to their myriad of differences, with time the ice begins to melt as similarities begin to appear. Bonds form. A brain, a beauty, a jock, a rebel and a recluse. No, I’m not talking about the movie The Breakfast Club. I’m talking about Asbury Park band The Extensions!

We are thrilled to premiere “Don’t You (Forget About Me)”, their cover of the Simple Minds tune from the aforementioned 1985 John Hughes film. The track is from the forthcoming Mint 400 Records compilation At The Movies II.

Can I describe the ruckus? Their cover begins with a nice twist. They take the “lalalala” from the end of the original version and use that as a short a cappella intro along with handclaps. It works quite well here before the familiar start of the song. Lead singer/guitarist Brian Erickson delivers the lyrics in a wonderfully unique take. I think Erickson, with The Extensions, has given himself a little room to get loose and explore a side of himself that allows some levity while still delivering music with his usual precision. That is really highlighted here as the song feels lighter than the original and dare I say it works better with the music? The band also seems to be having fun with the song and it all makes this one of the best tracks on the compilation. So play it loud and play it often and as you are leaving the house, work or school throw that fist up in the air like Judd Nelson at the end of The Breakfast Club.

In addition to The Extensions the album will feature many of the best acts on Mint 400 including Yawn Mower, sonofdov, Tom Barrett, Fairmont and Renee Maskin who turns in her first post-Lowlight track. The compilation is out November 12th.