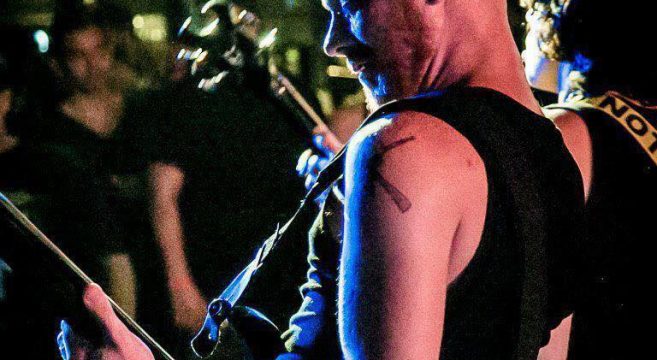 Something About…Shotty Mike and S**t.

“The best way to thank musicians is to go to their shows….”

This sage advice was given to me in 2015 by the late Mike Porrino, known in Jersey music circles as “Shotty Mike” of Shotty Mike and the Madheads, as I was wondering out loud how I was ever going to repay them. It was right after the musician I was living with at the time was in a debilitating accident and the local artist community mobilized to raise over $15,000 for us in one week. And he didn’t say “shows” he said “s**t.

We lost Mike at age 31 to a freak accident not long after; five years ago, this week. There was a line of over 350 people overflowing from the packed funeral home to comfort his devastated parents. They had arrived from out of state with little scope of the impact their son had on the community and were visibly moved. Witnessing the crowd thank Mike one final time moved me as well. They had all come to his “s**t!”

By this time my live-in relationship had collapsed. I lost my parents and one of my dogs soon after and was in the process of giving up my house and theirs. All of that combined led me to take his advice to nth degree. As it turns out, there’s a lot of s**t to go to in New Jersey! Rather than sitting around missing people in my tiny new apartment, I found shows and performances of one kind or another multiple times a week.

The more I went out, the more musicians I got to know (maybe I dated a few and maybe I didn’t…) and soon I was hitching rides with them to places beyond the bars and restaurants in my immediate area and not feeling so alone once I got there. I returned to places I hadn’t been in decades, like the Saint, the Stone Pony and the Asbury Lanes in Asbury Park. I checked out the newest new crop of Jersey Shore places supporting local music like Langosta Lounge, the Asbury Hotel, The Danny Clinch Gallery and a multitude of free shows all over town hosted by the Asbury Park Music Foundation.

North of the Jersey Shore I ventured to Crossroads in Garwood, the Laundromat in Morristown, Pino’s in Highland Park and countless wineries, breweries, distilleries, and coffee shops hosting events weekly in every inch of this state. On any given night I can easily find one or more good friends knocking the socks off patrons of these establishments with their talent, or follow one of their recommendations to hear something new. It still blows me away that I can see a band sell out the House of Independents or open for an iconic 80s rocker one week and on a coffee shop patio or street fair the next.

This is a very Jersey thing, and it is the reason I write the way I do for You Don’t Know Jersey. I am not reviewing the music or the venue from a connoisseur’s view, I am sharing my personal experiences and stories and things I learn about artists and restaurant owners as I go that you may not ever know otherwise. Talent and great food exist everywhere, so when it comes time for me to choose where I am going each night, I like more information. There are unique places and kindhearted people making our state a better place and I enjoy shedding light on them. I want you to go their s**t too!

That said, this Jersey girl is on the verge of a change that will allow me to explore living elsewhere. Rest assured this change won’t be permanent and the Jersey stories will keep coming. This fall and winter I’ll be catching you up on, just to name a few things, Nick Ryan and the Mess, the Bryan Hansen Band and the food scene just south of my beloved Metuchen in Perth Amboy. I also plan on meeting lots more Jersey bands and creating new stories.

In the spring I get to dabble in other scenes in different parts of the country. If in fact there is another state where the arts population adopts a 50-something, non-musician, born and raised in New Jerseyan and not only comes to her rescue as needed but allows her to write a column, work at a record label, co-host open mics, host house shows, be part of fundraisers and event planning, video production, and even a do a dash of in songwriting then perhaps I’ll have some hard decisions to make.

I am betting instead I will be keeping these trips short and racing home each time. Still, if musicians out
there are as kind to me as Mike was to everyone he knew, or as any of the others you have read about
from me here at YDKJ were to me, I’ll be sure to go to their s**t too.

Epilogue: Mike also used to say, “music is the universal language.” You can get a glimpse Mike’s tremendous talent and personality and hear him say it verbatim on the video below that I shot of him and Gavin Parker at the Old Franklin Schoolhouse’s open mic in November 2015. It will also help you understand the spirit of the advice he gave me and why I listened to him. Rest easy, Mike.

My 50th Birthday framed canvas, presented to me by the Bryan Hansen Band and all the artists and most guests at free public show we threw at the Old Franklin Schoolhouse to celebrate. I dare you to top that, other 49 states!!