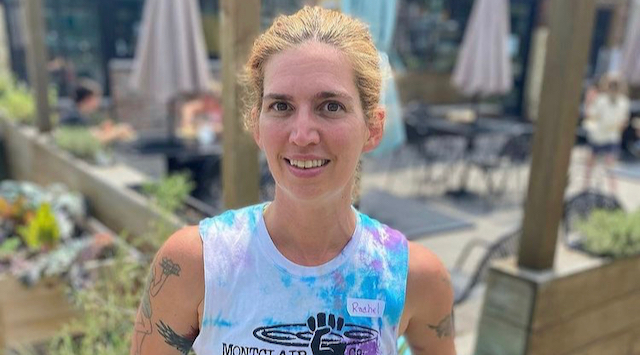 Interviews with the Innovators: Rachel Wyman of Montclair Bread

Rachel Wyman is the coolest person in Montclair. And, there are a lot of very cool people there. She has a long resume of amazing work and she just added author to the list of accomplishments. She runs her own business, Montclair Bread Co., which just opened a related second location in New Paltz, NY called Gunkin’ Doughnuts. She runs marathons and triathlons. She climbs mountains for fun. She leads a community of caring and interesting people using her incredible social media prowess. She is the mother of three. She has rabbits and a new puppy. And now she’s released her very own cookbook ‘Will Run for Doughnuts” of both family-favorites and best selling recipes from her bakery so you too can make these amazing culinary creations.

A post shared by You Don’t Know Jersey (@youdontknowjersey)

There’s even a picture of my loaf pan in the book because she put a call out for some consumer pans while she was doing the beautiful pictures throughout the book. Of course, I made her sign my copy on that page.

We got the cookbook a little early before the official publishing date so I had a chance to make a few of the recipes inside.

First, I tried the currant seeded bread which is healthy and very tasty at the same time. Mine came out a little flat but the slices were still very delicious and great to eat as a little snack between meals. We even used some slices on a charcuterie board. The currants and seeds went great with nice soft brie cheese. My now-famous loaf pan in her book is pictured above.

And, I absolutely had to give the Tres Leches Brioche Doughnuts that are the reason I first met her. She won the Food Network’s Donut Showdown in 2014 with this as one of her contest recipes. I interviewed her after the win and ever since she’s remembered me when I stop by the bakery. These doughnuts take approximately 900 steps to make but they are so rich and delicious that they are completely worth it. They are classic brioche doughnuts which are the base for many of her baked treats and they have a tres leches filling, icing glaze, and whipped cream topping. Like I said, 900 steps… each worthwhile in the final product.

We asked her some questions about being a business-owner–especially during the pandemic–and about her new cookbook, Will Run for Doughnuts.:

Why is including the word “dough” in the spelling of doughnuts so important?

From what I’ve researched, and I could be wrong, the UGH was dropped by Dunkin’ back when advertising was billed by the letter. They were the first to use the short form ‘Donut.’ So it was just about marketing and that big commercial brand and I want to set myself apart from that in every way possible. Also, for me, the doughnut is all about the quality of the DOUGH and I want to be sure it’s highlighted as much as possible.

What factors go into a great social media presence?

Consistency, engagement & great photos! With the sophistication of handheld technology these days, it’s too easy to take a great photo – put those awful low light, bad-angle, dirty rags in the background pics for the garbage. My goal is one post a day. I don’t always achieve it but I try and I also try very hard not to be noisy. Nothing is worse than an account that never posts anything and then posts 30 times in one day. That doesn’t work.

What is one topping no one should ever put on a doughnut?

I don’t really think anything is off limits. There is a time & place for every topping. However, I will caution that pop rocks should never go on a doughnut because they melt & disappear. It makes for a sad doughnut.

What is the oddest question you’ve ever gotten from Instagram?

Oh that’s a tough one. There’s been soooo many. I think the question that drives me the most insane is “when will you sell out of xyz” – if I knew that, I’d buy more lottery tickets. Of equal annoyance is the “do you have any pumpkin doughnuts?” in May – or insert whatever grossly out of season flavor you can think of.

What makes the Montclair community so special?

I moved my family to Montclair, 12 years ago, because I wanted to raise my kids in a diverse community. I still feel that’s what sets Montclair apart from some of the nearby towns. When I was growing up, there was one Jewish kid in my high school, one kid into skateboarding, zero brown kids, lots of jocks, a handful of farmers…I wanted more for my kids and I found it in Montclair. I LOVE that there are so many different kinds of people – we can learn from each other, celebrate each other’s differences, find people who share our interests and come together to enjoy some doughnuts & coffee.

With so many publishers and editors living in the Montclair area, was the idea of a book always something people talked about?

Yes and no. I was courted really early on by Penguin Randomhouse. It never came to fruition, which is great because I think what I was able to come up with, years later, is more than I could have ever imagined back then. I do think that the volume of publishers and editors in our area can sometimes mean that locals get overlooked because it’s too everyday, if that makes sense.

What surprised you the most about the publishing experience?

It is the ultimate game of ‘Hurry Up and Wait,” and you’re forced to play over and over and over for two years, give or take. I was also surprised by the amount of help and support I received and continue to receive from my publisher. I’m used to doing everything (on the marketing/writing end) on my own and now I have a whole team of helpers.

Name the best thing and the worst thing to come out of the COVID-19 lockdown.

My book is far and away the best thing, although the new MBCo pick up window is a close second!!! The worst thing has been the price gouging on supplies we have always needed before the entire world needed them too – like gloves, cleaning supplies and flour! It’s really hard to maintain profitability without raising prices.

Would you encourage your kids to become chefs/bakers/business owners?

There was a time when I would have said, no fucking way! Now that my kids are old enough to make real contributions to the bakery and the bakery team, I see how much they enjoy it and I would absolutely encourage them to go out on their own, do what they love. Growing up in a family with a parent who operates a small business (like my Dad did), gives you a totally different perspective on the world. Raising my kids in the food industry makes them such good customers. I’m so proud of how they interact with service employees when we go out together. They have an empathy you can’t teach. So, to get back to the point, I think their level of understanding about what this business really takes to succeed is such that I would support their decision to do it on their own. They already know what they’re up against and how much of themselves they will need to give to make it work.

You’ve added a pizza oven to the business because you said you’d always wanted a wood-fired oven.  Any other dream items you might add someday?

The best part of owning a bakery is that I can bake whatever I want, whenever I want. I might not sell it but I can make it for myself!!!  For a long time I swore I would never sell wedding cakes because I wanted to be a part of my community every day and not just for one special occasion. Now that I have that, I’ve been casually working on a specialty cake menu. I’d like to push myself to get back into the fancy part of baking & pastry. I was really good at it once and I went in a different direction but now I feel like it’s time to get back to it.

Copyright, You Don’t Know Jersey, LLC (2010-2022)
Pin It
Previous post:
Premiere and Interview: “Tomorrow’s Sun” & Neil Sabatino on 20 years of Fairmont
Next Post:
Something About the Ice Cream House in Edison