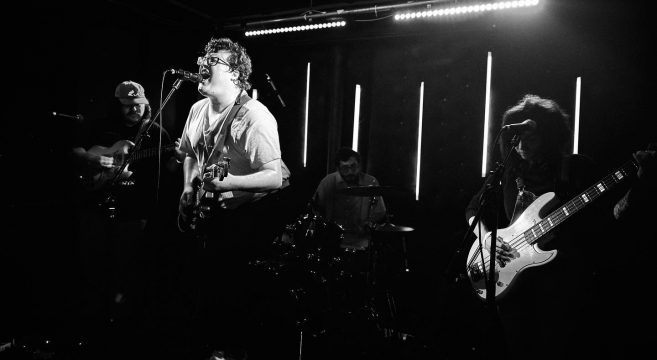 I have always been fascinated by what musicians listen to when they aren’t creating their own music. What music inspires them, what albums do they return to again and again—their “desert island” discs. With this in mind I have asked some of my favorite New Jersey musicians to name their top 10 favorite albums of all time. Not the albums that they think are “important,” or that have influenced many other artists or ones of technical merit. I wanted to know their very favorite albums that they love just because the records mean the most to them.

I met Luk Hendriks years ago when they played Asbury Lanes as Bud Buddies with Rob Odell. I loved their performance but shortly afterward Rob left for college and Bus Buddies was no more. Luk had a charisma that was undeniable, though, and I sensed that greater things were coming. We just had to wait for Hendriks to find the perfect bandmates and the right time to break out.

Luk was not one to sit still. He formed new band Teenage Halloween and has been rocking the pop punk scene for more than seven years now. Self-described as “queer power pop from Asbury Park,” the band’s trajectory is both impressive and well-deserved. They first released their EP Eternal Roast in 2017 and though it took a while for new material, last year’s self-titled album was well worth the wait. Released by Don Giovanni Records, the album is bursting with incredible pop punk that is catchy as hell. Hendriks described the album, “These songs are about mental health and queer struggles. Stand by your friends that are hurting. Harm reduction is the key to safety.” How good is it? The band has to keep pressing more vinyl as it keeps selling it out. As if that is not enough they also released their first video “Drown” last year through none other than Brooklyn Vegan.

Luk is a multi-hyphenate performer and entrepreneur with an endeavor called Complete Goner making hot sauce collaborations with bands and other groups to sell as merch, and a noise band (New Grasping Machina), along with bands Gay Nightmare Support Group, Magic Ghrelin, Kissies (and possibly even more bands that I can’t keep track of). They just returned from a eastern seaboard tour with TH and have been playing local shows with New Grasping Machina since returning.

Given their penchant for different band-sounds and being all over the Asbury Park scene for a while, I thought this list would be a great way to learn a little about Luk and wrap up this year’s Top 10 Albums Ever.

Probably the most important record to me as a songwriter. Taught me about short and sweet songs with infectious metaphors that leave you thinking. Absolutely essential listening for anyone.

It’s A Shame About Ray – The Lemonheads

Emotionally jarring and a record that truly created intense feeling for me. I can put it on and get a flashback to many places I’ve been happy, sad, scared, disgusted or euphoric. It’s probably the greatest nostalgia record.

Lola Versus Powerman and the Moneygoround, Part One – The Kinks

I started getting into this band because before the pandemic, I watched all the Wes Anderson movies. This record in specific was super new to me because it felt like Love, the Zombies, the Beatles and The Beach Boys had a weird offspring. Unmatchable hooks and chord progressions here.

This record gives the feeling of longing and fuzzed out but organized  chaos. The guitar tones on this record are unmatched. “Metal baby, my metal baby, Left the city with the heavy metal band”.

A really important record to me growing up. MF Doom is easily my favorite lyricist of all time, he creates such imaginative and upfront stories and narratives.  When he passed, it truly hurt, not just as a listener but as someone who loved him as a fan from afar. An artist true to his craft.

This is the record that demolishes all records. The storm before the calm. If you wanna break down the walls and avoid everyone in your life, this record is for you.

I hated the Dead until 2017. Now, I swear by them with my life. They’ve helped me so much with coping with a lot of really traumatic life things that I wouldn’t have felt as okay about without their accompaniment. American Beauty tells a story, there’s so much to unpack with these songs. Loving and peaceful, yet not the most optimistic. On top of that most of the band sings at least one song on this record. The Grateful Dead never ceased to be a truly collaborative experience.

Every ex-folk punk will deny the influence this record has on them because of the notoriety and lore that it has created, but it is truly one of the most brilliant ones. Patrick wrote a very spot on and authentic record about getting sober and the pain and beauty it can cause. It really rules because of its honesty, nobody in this band ever held back from being themself, and it makes the record very interesting. Knowing thes=e people individually, it’s just the greatest cast of people.

– Songs to Yeet at the Sun – Soul Glo

– August and Everything After – Counting Crows