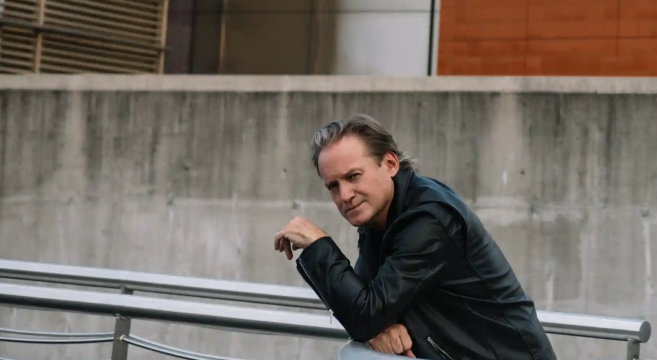 If you know anything about New Jersey indie rock you know about The Wrens. The band, Charles Bissell (guitar/vocals), brothers Greg Whelan (guitar/vocals) and Kevin Whelan (bass/vocals), and Jerry MacDonald (drums) released two critically acclaimed albums, Silver in 1994 and Secaucus in 1996, which saw their popularity steadily rise. Then in 2003 they released their beloved and hugely influential third album The Meadowlands. Universally adored by critics, it seemed that the band were on the threshold of mega-stardom and a follow up was anxiously awaited. But that promised fourth release–teased throughout the years–never appeared. Reasons for the abandoned release is now the stuff of lore including reasons both personal and private. There was supposedly new material but Bissell held it up apparently with endless tinkering and arguments about his share of credit. It has been 18 years since that album and last year Kevin Whelan had finally had enough.

He took the five songs he wrote for that never-released Wrens’ album and is putting them out, with a selection of new tracks, under the name Aeon Station. He is joined by fellow Wrens’ bandmates Greg Whelan and Jerry MacDonald. The new album, Observatory, comes out on Sub Pop Records on December 10. Tom Beajour produced the album in his Union City, NJ studio Nuthouse Studios. Spoiler alert…the album is brilliant.

Early track “Leaves” is a slow burner that builds with understated intensity. It is a reflective look back that has Whelan acknowledging that time but ready to move forward. “As I turn away to forget the past that leaves behind all the broken-down roads, to the homes and hopes and the dreams that won’t come true” he sings. But he defiantly asserts “I’d rather fight again then live with the pain.” Already he is displaying his vocal range here. In standout track “Fade”, an absolutely pulsing bass quickly leads to an glorious and cathartic outpouring of emotion. You can feel passion as Whelan sings “So goodbye to fear, it’s time to disappear to the unknown, be on our own.” The tracks feel as if he is releasing 18 years of pent up turmoil and just letting everything out to fall where it may. It is powerful stuff and the tune is a stunner.

Debut single “Queens” finds inspiration from a surprising place–ABBA’s song “The Winner Takes it All.” It is a joyous rocker about taking that big gamble. “It’s about betting on the real you. Like a game of high-stakes poker, you push all your chips to the center of the table and aren’t afraid to go “all in,” he explains. Like the Swedish band’s hit, Whelan’s song is big and bold. The song has a kinetic energy and is ready-made for playing live. Elsewhere there are also moments of wonderfully crafted indie pop-punk touches in songs like “Everything at Once” and “Better Love,” which looks with hope to the future. “Here comes a better love, the one you dreamed you’d always have.”

Observatory is a mature and deeply personal record. The album’s title references his son’s being on the autism spectrum and Whelan’s needing to learn to observe life without words through him. However he holds nothing back in his songwriting. Everything is laid out, warts and all. That honesty makes the album an unqualified joy from start to finish. What does Whelan want the takeaway to be? “I hope people feel a sense of strength when they hear this album,” he states while discussing his artistic aims as a whole. “Most importantly, I hope that it connects to them in some personal way.”

Kevin Whelan is quintessentially Jersey. He’s from Ocean City, living in north Jersey while with The Wrens and lives with his family in central Jersey now. His parents were teachers for a long time but had a dream to own a pizza joint and had one for a bit in Marmora. That pizza parlor is still in existence but owned by a former employee–now called Kirk’s Pizza. Pizza was a bonding factor when we met because we were in the middle of our A-to-Z NJ Pizza Month so we talked quite a bit about pizza throughout our lives.

This Pizza with the Band was done over drinks and some incredible pizza at Grain & Cane in Berkeley Heights with Kevin and (our friend and Kevin’s publicist) Rey Roldan. It was a beautiful night and one of the last weekends before it was too cold to comfortably sit on the patio. We lucked into a really gorgeous night of drinking, eating, laughing, and gaining a new friend because Kevin is honestly just a great human being.

Grain & Cane has a great variety of seasonal dishes on their dinner menu but we were only there for pizza. So, for the first time in all four of our lives, we ordered every pizza on the menu.

Left to right, we had the Calabrese with spicy italian sausage, wild arugula, and caciocavallo; the incredible Autumn Harvest with delicata squash, ricotta, porcini mushrooms, and aged balsamic; the Genovese with basil pesto, fresh mozzarella, and prosciutto cotto; and the classic Margherita with tomato sauce, mozzarella, and fresh basil.

Other than none of us caring about the pile of arugula burying the really delicious spicy sausage in the Calabrese, we liked all these pies. Autumn Harvest was our favorite though because of the creamy squash, umami-bomb mushrooms, and sweet balsamic rounding out the flavors. All of the pizza’s sourdough crusts are fermented for 24 hours so the pizzas are light and fluffy and perfectly charred from the wood-fired oven.

In between drinks and pies, Kevin graciously some questions:

Is the new album a source of relief, excitement or a bit of both?

Yes, it’s definitely both. I would say it is 14 years in the making so there’s kind of everything to it. It’s bittersweet, it’s super exciting. One of the first people I sent it to was Rey and he said “I know we’ve been friends a long time but I’m not giving you the friend thing, this is really good. We gotta work together.” In that regard it is exciting as my dreams have changed and I am cool with just having a good time.

In the song “Air” you sing “the weight I was lifting has been lifted from me.” Are you optimistic moving forward?

Yes, for sure. I am optimistic on every front. I was in, and still in The Wrens, and you figure that was 30 years. For 15 or 16 years I lived with them. That’s longer than with my wife. So there is a heaviness that has changed.

It has been almost 20 years since The Meadowlands was released. What has surprised you the most about how the music industry has changed?

Literally, a lifetime. Compared to that time of major label and not much on the internet, we had no booking agent. We had nothing, we literally only had a house in Secaucus. It’s been amazing how much it has changed. It was actually changing while we were in The Wrens at that time. That’s why it took 6 or 7 years with The Meadowlands. The speed of it all is so fast. We literally met Ryan (Pitchfork founder Ryan Schreiber) in Chicago when he was just starting out in his bedroom as a teenager. He came to our shows and said “I wanna start a website” and we were like what’s a website.

As you are older now is there a bit of a “screw it, just do it” attitude?

You play almost all the instruments on Observatory. Did you grow up in a musical household?

Not at all. We could barely whistle. My father loved to sing but that was it. I was a late bloomer in this respect. When I was 13 or 14 I was super nerdy and had no friends and was afraid of everything my mother bough a piano and I just became obsessed with it. And then I really got into Liberace. I know, I know. Everyone says punk rock but it was Liberace. I went to see him in Atlantic City and met him. I was like ‘oh my goodness.’ Later, over time I got into the guitar.

The album title references your son with autism. What has he taught you about seeing things?

Number one is you don’t need to speak as much. Number two, I think the appreciation of realizing you don’t know what someone is thinking and how they’re taking things in. We always try to project and guess what someone is thinking and speech helps that. For him, there is no area for that communication and it makes you think about all of it and observe all of it and see what’s important.

What is his response to music?

You know, no one has asked me that question and it’s a good one. We were lucky and got to go to Australia for work and take him along. He’s a lovely kid but he doesn’t like anything. But we went to these parks and there was this great Australian punk band and he just stopped as if it was a calling from somewhere else and that never happens. He immediately walked right to the front of the stage, in front of this old-school punk rocker and he took it all in. It was really a beautiful moment.

Are you excited to play these new songs live?

Yes! I am really excited. I have to figure it out the where and the how and the who. Hope to have Greg and Jerry in. I just did some jamming, rehearsing last night and it was great just hanging out. I hope to have Tom Brojour along. Need a piano player. Figuring it all out but it is fun doing it. Playing live is so cool, once you’re in it you’re like ‘oh man” and you start sweating. Can’t wait to do it again soon.

We can’t wait to meet up with Kevin again, hopefully when he’s playing this beautiful album live soon.

Copyright, You Don’t Know Jersey, LLC (2010-2022)
Pin It
Previous post:
The Driver Era and The Wrecks Make A Strong Showcase For their Talents At Sold-out Asbury Lanes Show
Next Post:
Food Picture of the Week – Firecracker 50/50 for 30K IG Followers