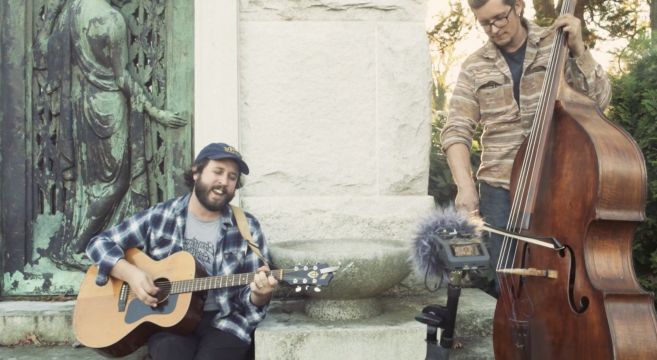 There is a place somewhere in Jackson where time seems to slow down. A haven away from the busy New Jersey day-to-day life where you can sit on the porch, listen to nature, and just think. It is a place that is conducive to creative endeavors and fruitful collaboration. This place is called The Boghouse and it is where Jackson Pines, guitarist/vocalist Joe Makoviecki and upright bassist James Black, recorded their incredible 2021 album Close to Home. It is easily one of the best records of the year so we are beyond excited to premiere the video for “Half Light.”

This gorgeous song was first released in the uncertainty at the beginning of the pandemic and social upheaval. They rerecorded the song for Close to Home as it clearly meant a lot to them. Makoviecki explains “This short little song helped keep us going through those dark days, as social reckoning rose and the dark star of power attempted and failed to crush hope.” The song is about loss and the futile struggles of not finding someone no matter how hard you search.

The video was created for Cemetery Tapes, the YouTube channel created by Philadelphia/New Jersey-based DIY music videographer Connor Rothstein. The setting of the video is a perfect metaphor for a song about loss. Like The Boghouse, cemeteries are places of peace and reflection.

We caught up a bit with Makoviecki and Black below.

Close to Home was recorded with long-time friends during quarantine and has received a lot of positive press. Do you feel that intimate process played a part in how it was received?

Joe: It might. We wanted the songs to have the energy of a garage band practicing in high school or a local house concert on a Saturday night, so being able to record these songs in one room in three days, mostly live, with friends we’ve known since we were teenagers or younger hopefully gave it an easy or well worn feeling, like an old jacket or something. Not that we sound like either, but the joyful looseness of Crazy Horse or The Kinks always made us excited and that’s probably a bit of where our heads were at. The virus has fucked everything up, let’s play loud songs with our schoolmates while we’re all still breathing, ya know?

Why is folk music still relevant in these current times?

Joe: Folk music is only as good as it is able to speak to people where they live and operate in the moment. Not when it’s playing pastiche to 1952 or 1925 or something, although I’ve been guilty of that. Hopefully there’s still a way to play the old melodies and work in the old forms without being a prisoner to classicism in arrangement or performance. I don’t even know if our new album contains one true folk song on it, but we’re singing about the disappointments, great joys, and shitoutofluck heartbreaks we’ve experienced lately and it speaks to where we are now where we’ve been at in the last year.

Maybe because of this we spent a good part of the summer learning and playing the songs of Merce Ridgway Sr. And Jr., two Ocean County, NJ Barnegat baymen and songwriters from the early to mid 20th century. We mess ’em up real good and play them in a new way, but I guess that’s been our connection to folk music in earnest this year. We even got to talk and sing about it on WFMU FM this summer on the newish program Six Degrees (Thanks Alan!).

I don’t think I answered the question.

Folk music remains relevant because there will always be songs that don’t come from the major labels, or labels at all, and they’re worth listening to, because no one can tell them what to do, and what not to sing. They deserve our attention.

This summer’s Sea.Hear.Now festival was the biggest stage you’ve played. What did you take away from the experience?

James: It was a damn good time. I slept on the beach in my truck. Really though, we weren’t sure if we could pull it off right up to a week before. We practiced a lot. So it kinda showed us what we’re capable of. At first I thought my head was gonna explode, but after the first song everything clicked and it felt great.

Joe: Once we got through the opener we just went for it I guess. There is nothing better, in the world, than when humans gather together and join in a communal tradition such as a music festival or something like that. Everyone had been hurting for something like it, some kind of release, for so long. It was an exploding climax of energy and joy, all weekend. And to see it from our perspective… We were just lucky to be invited (thank you, Timmy and Danny).

How did you get involved with Cemetery Tapes?

James: We saw a video of theirs and just reached out. We don’t have a manager or label or anything so we just reach out to folks who do good work and they got back and said let’s do it. We met up in Philly by Joe’s apartment, they hopped in my truck and we drove over to this huge graveyard and let it rip.

Joe: We had a really good time. It was super relaxing actually. Connor is a really talented artist, is in a band of his own, and we shot some more vids to roll out as the new year comes and goes.

What does Jackson Pines have planned for 2022?

We have new songs, more folk songs we’ve learned, and some friends we wanna play with, so there will be new music connected to both sooner than later. Also we’ll be playing a few more shows in Jersey in January before we turn inward for a little while to work on another record. We’d like to say in Spring we’ll be hitting the road like we used to, God willin’ and the variant don’t rise! But the jury’s out on that for now. Til then, more music and videos to come, that’s for certain.