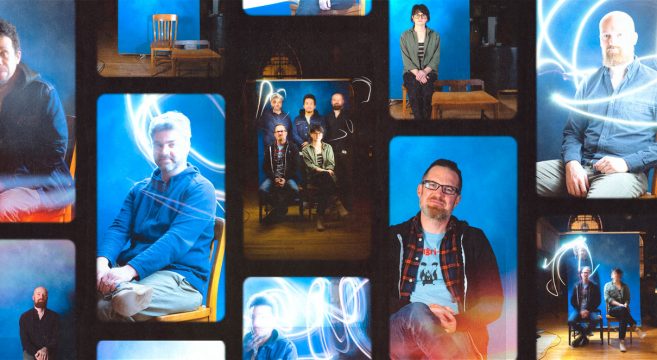 Ain’t Sure I Deserved It: Reviewing “Samantha” by Lowlight

Well, ain’t life just a kick in the head sometimes! After signing to the venerable Mint 400 Records and issuing Strange Light, their most sonically daring album yet, Lowlight and their frontwoman/primary songwriter Renee Maskin parted ways.

And this will be the last you to hear about that. Because both parties now exist on their own separate trajectories. Maskin issued her dazzling debut Swimming just a few weeks ago. Now her erstwhile bandmates follow suit with a single entitled “Samantha,” which also serves to introduce new singer John Gleason (also of the Roadside Graves).

Gleason was once described by no less an authority than Pitchfork as an “easily identifiable nowhere man,” and that still holds true today. His weathered voice floats slightly above and away from his new collaborators. Perhaps an apt comparison might be Kevin Morby or Kurt Vile, fellow earthbound songwriters whose vocals carry their tunes toward unexpected places. But just because Gleason sings with a thoughtful removal doesn’t mean he’s at all ambivalent.

In fact, “Samantha” is the best thing with Lowlight’s name on it since 2019’s “NYE.” And while their subsequent work remained adventurous, Lowlight always made its best music when the songs were placed front-and-center. And for that reason, “Samantha” feels like a return to form. Melodies are reprioritized, harmonies are lush and fleshed-out, and guitar and piano replace keys and synths. And while production is scaled back, the song is no less expertly-executed than anything on the ambitious Strange Light. For that reason, “Samantha” is the perfect reintroduction of a band we’ve both come to know well and come to expect great things from.

Although I hesitate to say Lowlight is “back” because they never really disappeared, they have shaken off a mountain of uncertainty to find themselves once again on firm footing. “Samantha,” and by extension, Lowlight themselves, have succeeded precisely because they had nowhere else to go but forward. Maybe Gleason himself said it best: “You will get back up, but never the same way.” Lowlight has returned fully-inspired, pointed in an exciting new direction. And they’ve left themselves no reason to look back.