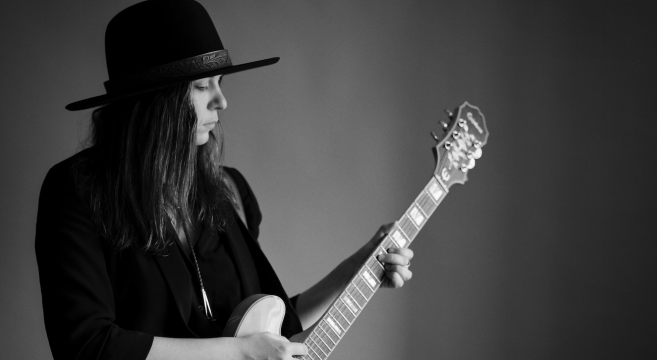 Renee Maskin has been a force in the Asbury Park music scene for a long time. Whether leading the band Lowlight or playing solo throughout the area, her captivating stage presence has always shown through. Channeling the likes of Joni Mitchell, Bob Dylan, and Lucinda Williams, she sings with vulnerability, honesty, and soul. When Maskin had announced she was leaving Lowlight last August it wasn’t a complete shock as she had been playing intimate solo shows for quite a while but it was still a blow to the local music community. One wondered what would be next? Well, the wait is over. We are thrilled to bring you “We Won’t Lose It Now,” the first single off her gorgeous forthcoming debut Swimming.

Last November Maskin debuted her first solo single, “When a Cowboy Trades His Spurs for Wings,” on the Mint 400 Records compilation At the Movies II. It was a cover tune from the Coen brothers film The Ballad of Buster Scruggs written by Gillian Welch and Dave Rawlings. That song only hinted at what was to come. Now with Swimming, Maskin is ready to show off her own prodigious songwriting skills.

Swimming is a collection of incredible new songs written and recorded while the pandemic surged on, mostly during the isolation of lockdown. Maskin has explained of the debut album “While some of that anxiety appears in the work, there’s beauty and hope woven in there too.” That is evident with “We Won’t Lose It Now.” Over joyful guitar and lush synth Maskin sings of escape and begs the listener to “drive me out of here.” That “here” could be your boring town as you jump in the car and head for the beach or it could be the overwhelming depression that being in a pandemic for two-plus years can bring. That elation as you hit the sand and know that “everything’s feeling all right” if even for a little bit. There is a guarded optimism here but it is strong and it is vital.

Swimming will be released this Friday, January 14th on Mint 400 Records. We asked Maskin a few questions about the release and last few months.

When did you first start writing songs?

After my second guitar lesson, when I was 13 years old. My teacher had shown me a power chord that day. I spent the rest of the evening sitting on the edge of my bed, moving that chord around and put a little song together. It wasn’t any good of course, but my desire to write was there at the very beginning.

How does it feel to finally be releasing an album of your own material?

It feels good! It’s been a long time coming. I had always been a bit sheepish and resistant to release anything under my own name. But “seasons of your life,” as my boyfriend calls it. Suddenly, something that I had dragged my feet about for many years is now something I’m ready for.

Was songwriting a source of comfort during the pandemic?

In the very beginning, it was a source of stress to be honest. I was too panicked and depressed to know what to say or how to say it. I wrote a few decent things, but it was not without a lot of agony in the process. At that time, there was also an endless stream of unsolicited social media advice, which was all well intended, saying that it was now prime time to be an artist because you could be home and create. But I was just too distraught for that sentiment to actually be useful.

And then out of the blue, I woke up one day and wrote an album’s worth of material. Literally in a day. It was like a dam broke. I had more ideas than I knew what to do with. A lot of it made it onto Swimming. That was last January.

How is writing solo material different from writing songs with a band?

There isn’t so much difference in my general sensibilities for lyrics or melody or things like that. The biggest change is knowing my own limitations and not being able to lean on anyone else for a “crazy drum jam” or a “ripping guitar solo.”  I like playing with others because you get to see how everybody shines and figure out fun ways to utilize all of it. But I’m confident in my own musicality too. I’m just working in a more limited palette when I’m working by myself. But it’s similar to visual art. You don’t need to use every color in the spectrum to make an arresting painting. You just need solid instincts.

The new album is called Swimming. Have you always loved swimming in the ocean?

Yeah, I’ve always loved it. My dad taught me how to body surf when I was a kid. I used to be really good, I had the timing of the waves down and could ride from really far out and make it to the shore. Now I’m older and I worry about things like injuries, so I hung up that activity. But I like a good high tide where I can jump the waves and let them kick my ass a bit. My best bud recently called me his Little Mermaid. I like the water.

What was it about Mint 400 that made you decide to go with them?

I like Neil’s approach. He’s grounded, he’s got a game plan, and he’s a straight shooter. I trust his advice. He’s been running Mint 400 for a long time and sees what works. There are a lot of great bands on the label too. It’s definitely a community. Brian Erickson and I did a little tour run to New England last summer. The Mint fam up there was more than eager to help put some shows together. I’ve had a Minty couch surfer too, to help out El Valerie on her tour. It’s nice to have that kind of musical family to look out out for each other.

Too much, as always. Mike Noordzy, Ben Ross, and I hit the studio this month to start a record. We still don’t have a name for the band yet. I’ve already started work on what I hope to be a summer album, and I have a whole other set of songs that I’d like to see done by the end of the year as well. I’m in some planning stages with director John Decker about a pretty ambitious music video project for 2022. And on top of all of that, I just purchased a home I’m still moving into. I’ve never been good at sitting still.  My ambition, at least, is to make up for some lost time this year.

Copyright, You Don’t Know Jersey, LLC (2010-2022)
Pin It
Previous post:
Coin and Mazie Close Out The Year With Exhilarating Sold-Out Show at The Stone Pony – Photo Gallery
Next Post:
Ain’t Sure I Deserved It: Reviewing “Samantha” by Lowlight