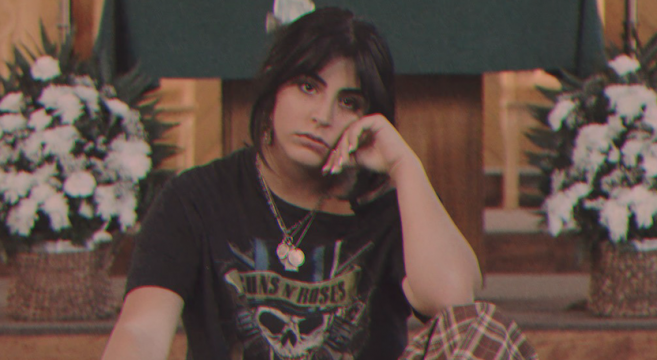 When we last saw Olivia Bec we had just put her gorgeous I Am the Sun on our list of the top albums & EPs of 2020. One of the best sounding albums of that year, songs like “Buoy” and “Odds” were emotionally cinematic, open and bright. It was a soulful work from the pianist/singer/songwriter that hinted at a creative force to be reckoned with. It seemed that she was on a trajectory to success with that amiable sound. But change is life and the most creative artists aren’t afraid to take a new direction. Bec takes this lead and crushes it head on with her new single “Church” which we are thrilled to premiere today.

“Church” opens with a pipe organ that anyone who attended a catholic mass will immediately recognize but that quickly delves right into a new sound for Bec. A pulsing, synthpop beat with an edge that you may not have expected from her. It is a mature and confident sound. In tone it is just about a 180 turn from her previous output. And it works gloriously. Most impressively, this is her first experiment with this new sound. Artists like PJ Harvey, Depeche Mode and Nine Inch Nails have a history of songs that explore religion and faith and the doubts that challenge this dogma. On “Church” Bec questions her own belief system.

The song’s true meaning actually didn’t come to Bec until it was completely finished. “My two dogs had gotten out while I was in a meeting with one of my managers, talking about auditions for our new drummer. I ran around my entire neighborhood barefoot, asking neighbors, screaming their names.” She continued, “I stopped in the middle of a street, and it was so quiet. I looked up at the sky and found myself saying “PLEASE, God” over and over again as I trudged back to my house. My dogs were there when I returned. I think about this moment a lot, because while it was the first time I noticed it, it was not the first time I said such a thing. And it was not the first time that the prayer was answered.”

This event led Bec to some serious contemplation. “In the coming months, I pondered on my beliefs constantly. I was raised Roman Catholic, and while my mother is extremely religious, she stopped taking us to church when I was maybe 12 years old. If you ask her, she’ll tell you that the religion is filled with hypocrites and scumbags. Which I agree with.  I always thought it strange that we were taught to fear God. People say it with pride; “God-fearing woman!!!” And those people are usually conservative, pro-life, sexist, racist homophobes who believe that God will send them straight to Hell if they use a fucking Ouija Board at a sleepover. I didn’t want to live like that, but I wanted to count on God still, because I started to realize that he never failed me.”

Bec says the song is about that inner turmoil and the reconciliation with ‘God’ on her terms after earlier religious trauma. It would be lazy and wrong to say the song is just blasphemy. It is catharsis that leads to a better understanding of belief. And you can dance your ass off to it. “I think because of how this song is being presented, many people will hear it and think it’s nothing but anti-religious zeal. Believe me, I am very prepared to be misunderstood.”

The song will be released on 02/22/22. You can catch Olivia Bec at Asbury Lanes on March 11th along with Idle Wave, Nonfiction and Babie.