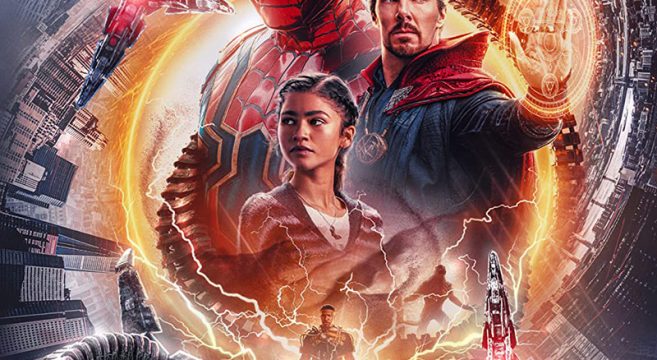 The new Spider-Man film is the 8th movie since 2002 starring the famous comic book character. One of the biggest problems with the first 2 installments of the current iteration, Homecoming and Far From Home, is that as likable and competent as Tom Holland is as the lead, Spider-Man was being done completely wrong. His ties to the Avengers, multiple people knowing his identity, and general personality as Spider-Man didn’t line up with the comics. This movie basically admits this, and like a magic trick that I would never have expected, it goes a long way toward correcting those mistakes.

Following the events of Spider-Man: Far From Home, No Way Home begins with his secret identity being revealed to the world. As a result, Peter as well as MJ and Ned’s lives begin to suffer. In order to fix this, Peter believes that Dr. Strange, who he met in Avengers Infinity War, will be able to help. Dr. Strange suggests a spell to make everyone forget and in the process of that spell being repeatedly changed by Peter, a huge mess is created.

Sure, the premise begins very shaky, with the idea that Doctor strange would actually cast that spell in the first place. But the energy level and sense of fun are very high, and the dramatic and tragic scenes work as well. There has been Oscar talk regarding Spider man NWH and it is actually warranted. There is som seriously good acting in this film as well as genuine emotion ranging from humor to tragedy to hope.

I don’t want to give anything away about the story that you wouldn’t already know, except to say that there are a lot of elements from the 19 year history of the Spider-Man films that have all been brought together here. While a lot of franchises have been doing this lately, many of those attempts have been mediocre to, in the case of the Star Wars sequels, absolutely terrible. This film, however, really hits a home run, finding a way to incorporate nostalgic elements into a story that is creative without being too contrived and respectful of the nostalgic elements. The wide gamut of emotions and depth of connections and wonderful sense of humor all work perfectly together. Anyone can enjoy this movie, but to really get the full emotional impact, you need to have seen all 7 films that preceded it going back to 2002. For true fans, it is a real treat.

Back to what I said at the beginning, the ending of this movie is like the end of the origin story of Spider Man. The message is that he really wasn’t Spider-Man until the very end of this film. And that shows that the writers finally understand what Spider-Man should be. It is a very surprising and unexpected ending that truly brings Spider-Man back to his roots and says goodbye to the errors of the MCU version.