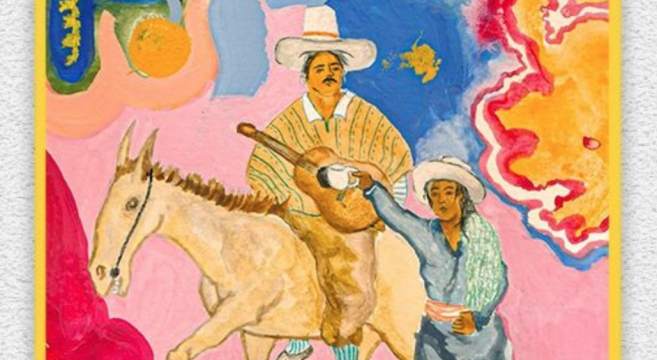 Metuchen-based guitarist/composer Alejandro Ataucusi has had quite a musical journey! Some
days, you can catch him in the corner of Hailey’s Harp & Pub playing Beatles tunes. Other times he’s
touring Australia, or teaching students, or contributing to an abstract about illusory tempo drifts. At one
point, he even played lead in a punk rock band! But we’ll let you Google that one for yourself.

At the heart of Ataucusi’s musical sensibility, however, has always been his South American
roots. And out of that sensibility rose Forbidden Tropics, his Afro-Peruvian jazz band. In 2019, they
dropped the promising EP, ‘Road Trip to El Carmen’ which hit about as delightfully as a cool summer
breeze.

Now, nearly three years later, Ataucusi, keyboardist Robbie Skorge, bassist Jackson Grundt,
percussionist David Greiff, and drummer Mike Dick have announced the eight-song ‘Peruvian Rhapsody’
with “Café Frio” coming out the gate as the lead single. And what a single it is!

While it might be easy to bring up Santana when talking about what Forbidden Tropics might
sound like, I’d encourage you to look elsewhere. Instead, this reviewer hears a more apt comparison to
the legendary 1960s collaborations between American jazz pianist Vince Guaraldi and Brazilian guitar
luminary Bola Sete.

Guaraldi, with his distinctly American credit as “the guy who wrote the Charlie Brown song,” and
Sete with his innate ability to blend folk, pop, jazz, flamenco, and bossa nova understood the very
essence of what “fusion” could do. It takes things that don’t make obvious sense and creates something entirely new. I would argue Forbidden Tropics understand those same concepts and pull them off flawlessly with “Café Frio.”

The result is something that cuts to the essence of everything Ataucusi has worked toward so far
in his career, and perhaps even why he does what he does in the first place. His work in Forbidden
Tropics seems not just like the fusion of different musical sensibilities, but the fusion of life sensibilities,
as well: a little academic, a little worldly, extremely melodic, and a whole lot of fun!