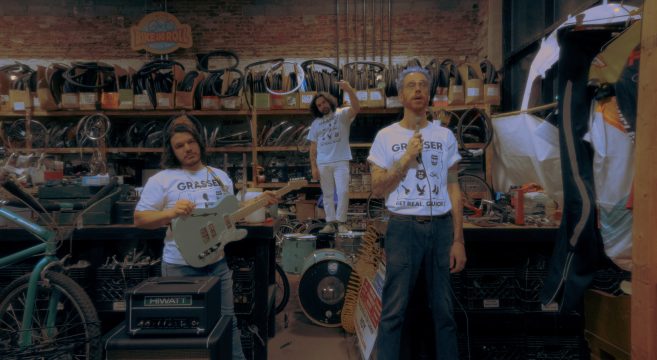 Spring is finally here. The days are getting longer, the weather a little warmer, flowers are starting to sprout, and people are moving outside. With that in mind we are stoked to premiere the new video from Grasser.

The video was filmed at Second Life Bikes in Asbury Park and the band could not have picked a better location given the song’s theme. It’s a romp about never stopping and this song never stops moving you. Self-described as the boy band for the end of times, Grasser have become experts at their distinct method of blending so many genres yet delivering a singular sound. You can hear elements of hip-hop, disco, pop and electronica. Probably some things I’m missing. Simply stated, “Nothing Ever Stops Moving” is peak Grasser.

How did the song title influence the location for the video shoot?

We shot this at Second Life Bikes in Asbury Park, and it was very much on purpose. Being entirely engulfed in means of transportation while singing about perpetual movement seemed hysterical to us. That along with the actual edit of the video being constantly pushing in or pulling out without ever staying still was us just beating our point in your heads.

What was the inspiration for this positive message song?

I’m so glad that you were able to take a positive message out of this one, because this is easily the saddest song on the album for me. I didn’t mean for the lyrics to come off positive whatsoever, however I do write lyrics as a way of processing things in my life – which is me attempting to make a positive out of a negative. The line “Nothing ever stops moving, so why should I?” is about literally moving home to home. I lived in 5 or 6 spots in just as many years. The chorus progression was written on the first day living in the apartment that started this bout of moving. Then I wrote the verse progression and lyrics on my first day living in the second apartment, which was just a single room in a winter rental. I couldn’t change any of the decor, so I was living in a little boy’s room with bunk beds and model airplanes hanging from the ceiling. It was comically sad. The song was conceived because of my constant moving, so the lyrics/song title was a super obvious way to tie those life experiences and existing song parts together. This is also the song on the album that is most direct lyrically. I didn’t try masking what I was talking about, like I normally would. Which is the reason I think this one hits so hard.

Last time we spoke about playing shows you mentioned that you had to figure out a way to play the songs on the new album live first. Any progress there?

We have been working it out, just not as quickly as we’d hope. All the members of Grasser have 2, 3, 4 bands each – so although this project doesn’t look to be as active as we could be, it’s because we are spreading ourselves as thin as we can. Nick and Dana now play in Yawn Mower’s live band with me, and we have our debut full-length coming out this summer. Nick and I recorded a lot of stuff for Dana’s solo project, Dana Why – which has 3 separate full-length albums completed. Dana is playing 3rd guitar in my other band Earth Telephone, which also has a debut full length completed. Nick’s band Les Dangers has their debut full-length nearing completion. Dana has been playing bass in Little Hag, as well as producing some of their best material to date. Then we’ve all been recording and producing a few newer, younger bands at our home studio. Everything we are doing seems slow moving, but in actuality we are just making sure each project gets the time in the spotlight they deserve before we move onto the next thing. Grasser is a visual band more than a live act anyway, so practice has been slow moving… but I did just get the Roland SPD for using backing tracks live. So we’re trying to work it out as a three piece instead of filling the stage up with hired guns.

And, here it is, the video for Nothing Ever Stops Moving: