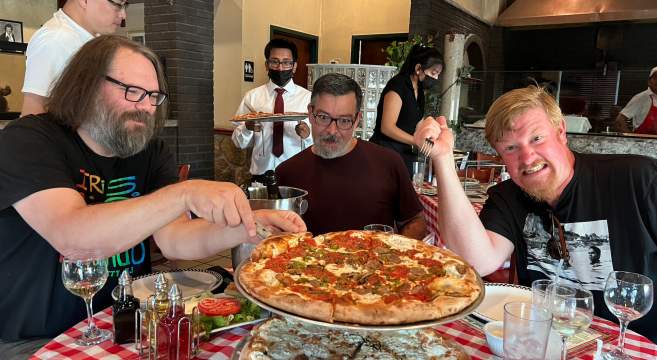 Sometimes you take a band out for pizza and you have a nice time. You talk music, food and whatever else that comes up naturally in conversation and afterwards you all go on your way. Other times the stars align and your faith in humanity is restored with an act of generosity and kindness. That is what happened when we took Jersey City band Tom Barrett & the Cuts out for pizza ahead of the Jersey City Jubilee at White Eagle Hall on Friday to celebrate the release of Tom’s new album You Are and You’ve Always Been. But more on that later.

Tom Barrett has been a fixture on the Jersey City music scene for over two decades. He was a member of the art-rock, experimental outfit, American Watercolor Movement. We initially met him when he fronted the excellent shoegaze band, Overlake. Since that band’s demise he has lent his talents to artists such as Pioneer the Eel and CR & the Nones as well as the post-Overlake trio WAVE. He was also in South Jersey band The Everymen where he met bassist Jamie Zillito and drummer Jake Fiedler who are now his backing band, the Cuts. They lend some power to Barrett’s softer sound in the live setting. Recently Barrett has explored a quieter side of himself releasing music that allows his voice and emotions to come to the forefront.

When we asked where the gents wanted to get pizza we were told Zillito swears by Brooklyn’s Brick Oven Pizzeria in Edgewater.

We hadn’t walked in the door a minute when a gentleman named Eddie at a table just inside the door offered us a free bottle of wine. At first, we were taken slightly aback. This level of generosity is something kind of rare these days. He must have taken a liking to us because he soon offered another bottle of wine as well. We happily accepted, especially since we consumed the first bottle so quickly. After all, you get a table of writers and musicians together and the drinks flow steadily. Eddie was talkative and friendly and when he learned we were interviewing a band we all got around to talking about music. He loved hearing about bands we knew and our histories with music. What he did next pretty much shocked us all. As he was leaving he stopped by our table one more time to say he took care of the bill. The table was stunned. Barrett put him on the guest list for the jubilee.

In between talking about music with the band, we discussed the debauchery of being on the road with nationally touring musicians and stealing headliners’ booze. In all fairness they did leave a little bit left in the bottle. There was also mention of staying in horror houses in far off cities where you have to make a quick escape in the night. We also hit upon the current housing situation in Jersey City which was just named the most expensive city to live in the entire country. I wish I could remember more of the details but in fairness there was a LOT of wine.

We let the band choose the food and they did well. Two giant platters of antipasto and fried ravioli opened up the meal and we had three pizzas–a classic white pie with ricotta, mozzarella, and garlic; a sausage and hot peppers pie, and a pepperoni pizza. The crust was chewy and very flavorful on all the pizzas and we could immediately tell why Jamie picked this pizza parlor.

The Jersey City Jubilee is at White Eagle Hall this Friday 09/09 and it promises to be an incredible night of local music. Joining Tom Barrett & the Cuts is low-fi rock duo Sunshine & the Rain, punk rockers 50 Ft. Furies (who feature Tom’s wife, Stacy, on drums), rockers CR & the Nones, and singer/songwriter Sean Kiely. There is no better way to get a chance to see the current state of rock coming out of Jersey City.

You can still get tix here in advance or at the door the night of the show.