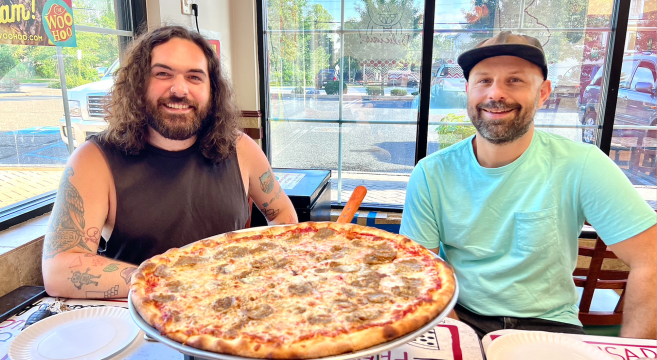 Every year Alice and I take our yearly vacation in Ocean City, NJ. We work hard all year at our respective jobs along with running this website and our Instagram account. We do not let anything interrupt this week of sun, sand and relaxation. Well, almost anything. When Asbury Park band Yawn Mower calls though, we answer! When they suggested meeting for pizza at Fusaro’s in Manahawkin, one of our favorite South Jersey pizza joints, well Ocean City would still be there the next day. We headed 40 miles up the Garden State Parkway to meet Mike Chick and Biff Swenson to talk pizza and their debut full length LP To Each Their Own Coat.

Because Chick and Biff are basically royalty here, we got treated to their favorite pie as well as some surprises. The favorite pie came out first and was a divinely tasty meatball and garlic pizza. Wait. That’s it? That’s their favorite pie? One bite and we knew why. A classic done with perfection. You have to be able to ace the standards before you can start experimenting and obviously Fusaro’s is up to the task.

Next, a stained glass piece of art came out with four different topping combos on one Sicilian square pie. When this came to the table I am pretty sure all our jaws dropped. Ricotta, pepperoni, hot honey, vodka sauce, basil oil drizzle… this pie had everything. This is now going to be a go-to whenever we visit a Fusaro’s. Pizza perfection.

Chick went to high school with Fusaro’s owner, Andy Costagliola, so his art is all over Fusaro’s walls, pizza boxes… even hats and t-shirts. A heaven-made pizza band partnership. Costagliola gave us a behind-the-sceens tour of the kitchen and back area where the magic happens. We talked about his great staff, supply chain issues and other worthy pizza joints. We highly recommend visiting them in Manahawkin or their other location in Forked River.

I asked the guys if they were a pizza what would they be?

Of course music was the main topic of conversation. Yawn Mower will be releasing their full length debut album To Each Their Own Coat later this month. It is no exaggeration to say it is the best thing they’ve ever done. It is an ambitious, accomplished record that finds the band firing on all cylinders. The album was a long time in the making and I asked Chick about finally getting it out there. “We are very thrilled. We are proud of this record. We dig the songs, the structures, the extra instruments we added to our normal formulas and the guests that worked on it with us.” He added, “We are also stoked to have it being released on vinyl and will be even more stoked if people buy said vinyl (wink). Vinyl should be available early November, fingers crossed.”

Right from the opening chords of “Broke in Brainville” you can feel both the familiar and the new. This is the classic Yawn Mower sound but it is much more confident and assured. There is a little less fuzz in the sound but much more attitude than previous work. And I really dig it. If this is doom pop I’ll be dancing into Judgment Day. New single “Elevation” starts with a slinky bass intro but soon rockets forward on a wave of 80s infused alternative with wonderful touches of synth and guest vocals from Pam Flores. Swenson is gloriously ferocious on drums here.

“Sixteen Minutes” is a standout track and one of the best song on a record with so many awesome songs. An homage to musician/graphic designer Mike Krol, it has a classic Mike Chick delivery over catchy as hell indie pop punctuated with piano and violin. It is basically a symphony for the ears, ready made for singing along to at the top of your lungs. I really cannot stress enough how good To Each Their Own Coat is. I have been listening to this record non-stop for a week and already know this will be on my steady rotation for a while. The band has never sounded better than they do here.

You can catch Yawn Mower when the play the Sea.Hear.Now “There Goes the Neighborhood” show at The Wonder Bar this Friday. They will have advance copies of To Each Their Own Coat at the show. Joining them on the bill is Gods, Sunshine Spazz, Pamela Flores, Rachel Ana Dobkin and Renee Maskin. It is sure to be one hell of a party. Does the band have anything special planned for this show? “We do! Our friend Nicole Scorsone will be joining us on violin for a few songs. She is the one who recorded all the strings on our album, so we’re hyped to get to play some of those songs live in their musical entirety,” Swenson said. “That’ll be the debut of 7 piece Yawn Mower, or “YM7″ as we’ve been referring to it. We also have a pretty cool set-closer cover with Pam Flores on lead vocals.” Along with Scorsone and Flores “YM7” features guitarist Nick Gianatiempo, bassist Dana Yurcisin and Eric Friedman

In other exciting news Yawn Mower heads out for their first ever tour this Autumn. “We are so stoked to go on tour! We’ve done countless weekenders, or one-off out of state shows that we’ve flown in for – But to have 8 full days in a van with my people will be otherworldly. It’s been 6 or 7 years since I did any substantial touring, so I can’t wait to just tune out all the bullshit of my day-to-day in exchange for fall foliage and specially curated playlists.” Chick shares in the excitement, “I’m gonna keep my mind and body sharp leading up to the tour and bring my jump rope so I can get some exercise in at the rest stops and gas stations. If anyone wants to donate to our tour effort, hit us up. We’d fully appreciate any kind of monetary help. More on that as we get closer to the dates.”

To Each Their Own Coat will be out September 30th on Mint 400 Records. Autumn tour dates below.