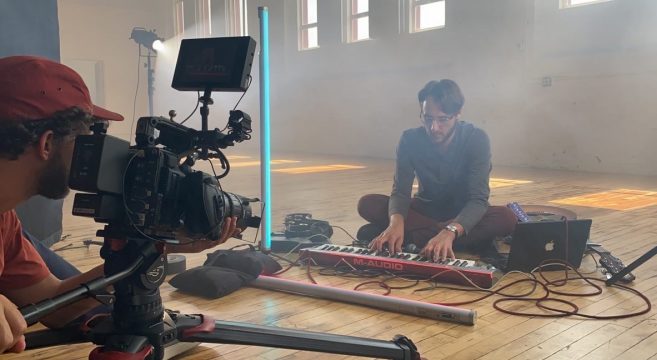 Alice and I were recently in Philadelphia for a show and instead of driving back to Bloomfield decided to stay the night at a hotel back over the NJ border in Voorhees. That following morning Asbury Park musician Brian Erickson DMed us about an Instagram story we put up which in turn turned into an impromptu get together for pizza and a stroll through Princeton, wonderfully killing a whole afternoon. Which brings us to his newly released video for “Mall Madness”, a song originally from his brilliant 2020 solo album Little Secrets and now on his new record Mall Madness: The Little Secrets Sessions. Like that autumn afternoon, the song and video are both lush, contemplative and sublime.

The song is a brilliant nugget of 60s influenced folksy psych-pop which Erickson has masterly captured visually with his use of grainy images, flora, silhouette and acoustic strumming. The video was made in collaboration with 10PRL Productions and was directed by David Allen and produced by Kira Sanchez and April Centrone.

Also out now on all streaming sites via Mint 400 Records is Mall Madness: The Little Secrets Sessions which features acoustic and instrumental versions of the album, as well as a selection of demos and unfinished recordings all taken from the same recording sessions. Short pieces like “Sleeping Outside” and “Or Have You All Been Lying to Me?” are unique glimpses inside the songwriting process of one of the most vital musicians in local music.

Copyright, You Don’t Know Jersey, LLC (2010-2022)
Pin It
Previous post:
Nickelback Prove They Still Got it In Crowd-Pleasing Sold Out Starland Ballroom Show
Next Post:
Asbury Park Band Yawn Mower Checks In With Their Favorite Albums & Songs of 2022